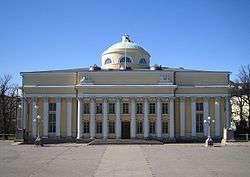 Any person domiciled in Finland may register as a user of the National Library, and after this, borrow library material for home use. The publications in the national collection, however, are not loaned outside the library. The library contains one of the most comprehensive collections of books published in the Russian Empire of any library in the world.

The National Library is located in a library complex in the heart of Helsinki
Helsinki
Helsinki is the capital and largest city in Finland. It is in the region of Uusimaa, located in southern Finland, on the shore of the Gulf of Finland, an arm of the Baltic Sea. The population of the city of Helsinki is , making it by far the most populous municipality in Finland. Helsinki is...
, right by Senaatintori square. The oldest part of the complex, designed by Carl Ludvig Engel
Carl Ludvig Engel
Carl Ludvig Engel, or Johann Carl Ludwig Engel , was a German architect known for his neoclassical style. He had a great impact on the architecture of Finland in the first part of the 19th century....
, dates back to 1844. The newer extension Rotunda dates to 1903. The bulk of the collection is, nonetheless, stored in Kirjaluola (Finnish for Bookcave), a 57600 cubic metres (2,034,124.8 cu ft) underground bunker drilled into solid rock, 18 metres (59.1 ft) below the library.