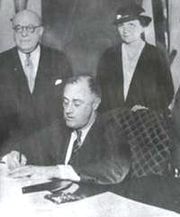 The National Labor Relations Act or Wagner Act (after its sponsor, New York Senator Robert F. Wagner
Robert F. Wagner
Robert Ferdinand Wagner I was an American politician. He was a Democratic U.S. Senator from New York from 1927 to 1949.-Origin and early life:...
) , is a 1935 United States federal law that limits the means with which employers may react to workers in the private sector
Private sector
In economics, the private sector is that part of the economy, sometimes referred to as the citizen sector, which is run by private individuals or groups, usually as a means of enterprise for profit, and is not controlled by the state...
who create labor union
Labor history of the United States
The labor history of the United States describes the history of organized labor, as well as the more general history of working people, in the United States. Pressures dictating the nature and power of organized labor have included the evolution and power of the corporation, efforts by employers...
s (also known as trade unions), engage in collective bargaining
Collective bargaining
Collective bargaining is a process of negotiations between employers and the representatives of a unit of employees aimed at reaching agreements that regulate working conditions...
, and take part in strike
Strike action
Strike action, also called labour strike, on strike, greve , or simply strike, is a work stoppage caused by the mass refusal of employees to work. A strike usually takes place in response to employee grievances. Strikes became important during the industrial revolution, when mass labour became...
s and other forms of concerted activity in support of their demands. The Act does not apply to workers who are covered by the Railway Labor Act
Railway Labor Act
The Railway Labor Act is a United States federal law that governs labor relations in the railroad and airline industries. The Act, passed in 1926 and amended in 1934 and 1936, seeks to substitute bargaining, arbitration and mediation for strikes as a means of resolving labor disputes...
, agricultural employees, domestic employees, supervisors, federal, state or local government workers, independent contractors and some close relatives of individual employers.


The key principles of the NLRA are embodied in its concluding paragraph of section 1 including:

encouraging the practice and procedure of collective bargaining and by protecting the exercise by workers of full freedom of association, self-organization, and designation of representatives of their own choosing, for the purpose of negotiating the terms and conditions of their employment or other mutual aid or protection.

The key principles also include:


General information about the NLRA may be found on the NLRB website.

The National Labor Relations Board has two basic functions: overseeing the process by which employees decide whether to be represented by a labor organization and prosecuting violations. Those processes are initiated in the regional offices of the NLRB.

The NLRB's website includes the text of manuals useful for those who are engaged in union organizing or in the practice of labor relations and law. These include Rules and Regulations.

* NLRB An Outline of Law and Procedure in Representation Cases

The act was immediately controversial.

Second, the American Federation of Labor
American Federation of Labor
The American Federation of Labor was one of the first federations of labor unions in the United States. It was founded in 1886 by an alliance of craft unions disaffected from the Knights of Labor, a national labor association. Samuel Gompers was elected president of the Federation at its...
and some employers accused the NLRB of favoring the Congress of Industrial Organizations
Congress of Industrial Organizations
The Congress of Industrial Organizations, or CIO, proposed by John L. Lewis in 1932, was a federation of unions that organized workers in industrial unions in the United States and Canada from 1935 to 1955. The Taft-Hartley Act of 1947 required union leaders to swear that they were not...
, particularly when determining whether to hold union elections in plantwide, or wall-to-wall, units, which the CIO usually sought, or to hold separate elections in separate craft units, which the craft unions in the AFL favored. While the NLRB initially favored plant-wide units, which tacitly favored the CIO's industrial unionism
Industrial unionism
Industrial unionism is a labor union organizing method through which all workers in the same industry are organized into the same union—regardless of skill or trade—thus giving workers in one industry, or in all industries, more leverage in bargaining and in strike situations...
, it retreated to a compromise position several years later under pressure from Congress that allowed craft unions to seek separate representation of smaller groups of workers at the same time that another union was seeking a wall-to-wall unit.

Third, as time went by, employers and their allies in Congress also criticized the NLRB for its expansive definition of "employee" and for allowing supervisors and plant guards to form unions, sometimes affiliated with the unions that represented the employees whom they were supposed to supervise or police. Many accused the NLRB of a general pro-union and anti-employer bias, pointing to the Board's controversial decisions in such areas as employer free speech and "mixed motive" cases, in which the NLRB held that an employer violated the Act by firing an employee for anti-union reasons, even if the employee had engaged in misconduct. In addition, employers campaigned over the years to outlaw a number of union practices such as closed shop
Closed shop
A closed shop is a form of union security agreement under which the employer agrees to hire union members only, and employees must remain members of the union at all times in order to remain employed....
s, secondary boycotts, jurisdictional strike
Jurisdictional strike
Labor unions use the term jurisdiction to refer to their claims to represent workers who perform a certain type of work and the right of their members to perform such work...
s, mass picketing, strikes in violation of contractual no-strike clauses, pension and health and welfare plans sponsored by unions and multi-employer bargaining.

Many of these criticisms included provisions that employers and their allies were unable to have included in the NLRA. Others developed in reaction to NLRB decisions. Over all, they wanted the NLRB to be neutral as to bargaining power, even though the NLRA's policy section takes a decidedly pro-employee position:

It is declared to be the policy of the United States to eliminate the causes of certain substantial obstructions to the free flow of commerce and to mitigate and eliminate these obstructions when they have occurred by encouraging the practice and procedure of collective bargaining and by protecting the exercise by workers of full freedom of association, self- organization, and designation of representatives of their own choosing, for the purpose of negotiating the terms and conditions of their employment or other mutual aid or protection.

Some of these changes were later achieved in the 1947 amendments.

Opponents of the Wagner Act introduced several hundred bills to amend or repeal the law in the decade after its passage. All of them failed or were vetoed until the passage of the Taft-Hartley amendments in 1947. More recent failed amendments included attempts in 1978 to permit triple backpay awards and union collective bargaining certification based on signed union authorization cards, a provision that is similar to one of proposed amendments in the Employee Free Choice Act. Under the NLRA unions can become the representative based on signed union authorization cards, but only if the employer voluntarily recognizes the union. If the employer refuses to recognize the union, the union can be certified through a secret-ballot election conducted by the NLRB.