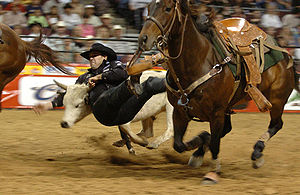 The National Finals Rodeo, organized by the Professional Rodeo Cowboys Association
Professional Rodeo Cowboys Association
The Professional Rodeo Cowboys Association is an organization whose members compete in rodeos throughout North America, primarily in the United States. The PRCA sanctions rodeo venues and events through the PRCA Circuit System. Its championship event is the Wrangler National Finals Rodeo...
, is the premier championship rodeo
Rodeo
Rodeo is a competitive sport which arose out of the working practices of cattle herding in Spain, Mexico, and later the United States, Canada, South America and Australia. It was based on the skills required of the working vaqueros and later, cowboys, in what today is the western United States,...
event in the United States
United States
The United States of America is a federal constitutional republic comprising fifty states and a federal district...
. Wrangler Jeans
Wrangler Jeans
Wrangler is a manufacturer of jeans and other clothing items. The brand is owned by the VF Corporation, who also own Lee, JanSport and The North Face, among others. Its headquarters is in downtown Greensboro, North Carolina, with production plants in a variety of locations throughout the world...
is the title sponsor for the 10-day event, commonly just called the National Finals or NFR, which is also sometimes referred to as the World Series of Rodeo and the Super Bowl of Rodeo. The NFR is held each year in the first full week of December, at the Thomas & Mack Center
Thomas & Mack Center
The Thomas & Mack Center is an arena, located on the campus of the University of Nevada, Las Vegas, in Las Vegas, Nevada, USA. For ring events, the capacity is 19,522, for basketball, the capacity is 18,776.-History:...
on the campus of the University of Nevada, Las Vegas
University of Nevada, Las Vegas
University of Nevada-Las Vegas is a public, coeducational university located in the Las Vegas suburb of Paradise, Nevada, USA. The campus is located approximately east of the Las Vegas Strip. The institution includes a Shadow Lane Campus, located just east of the University Medical Center of...
(UNLV) in Paradise, Nevada
Paradise, Nevada
Paradise is an unincorporated town in the Las Vegas metropolitan area in Clark County, Nevada, United States. The population was 223,167 at the 2010 census...
.

Since the rodeo uses 'special dirt', the dirt is stored on the UNLV campus for use in next NFR.

The NFR is the final rodeo event of the PRCA season. World championship titles are awarded to the individuals who earn the most money in his or her event:

The "World All-Around Rodeo Champion Cowboy
All-Around Cowboy
All-Around Cowboy, or All-Around, is an award given to a rodeo competitor who is most successful in two or more events. Most individual rodeos and championships determine the winner of this award at the conclusion of the other events or championships....
" title is also awarded at the end of the NFR to the highest-earning cowboy who has regularly competed in more than one event during the year. Because of the large amount of money awarded during the NFR, the leader in an event going into the NFR is frequently dethroned at its end.

Since this event is extremely popular, it sells out all seats for all of the events. Many casinos carry the events live in their sports books or host special parties to accommodate all of the fans in town who can not get tickets for the events. Most of the major hotels and casinos book special entertainment into their showrooms with a country theme offering many of the regular shows an extended break.

The National Finals Rodeo (NFR), known popularly as the "super bowl of rodeo," is a championship event held annually by the Professional Rodeo Cowboys Association (PRCA). That organization established the NFR in 1958 in order to determine the world champion in each of rodeo's seven main events: calf roping, steer wrestling, bull riding, saddle bronc riding, bareback bronc riding, and team roping. The world championship steer roping
Steer roping
Steer roping, also known as steer tripping, is a rodeo event that features a steer and one mounted cowboy.The steer roper is behind a taut rope fastened with an easily broken string which is fastened to the rope on the steer. When the roper is ready he calls for the steer and the chute man trips a...
competition has always been held separately from the regular NFR. The National Finals Rodeo showcases the talents of the nation's top fifteen money-winners in each event as they compete for the world title.

Oklahoma City successfully bid in 1964 to be the host city. In 1965 the first NFR in State Fair Arena drew 47,027 fans. NFR remained there through 1978 and there through 1984 at the Myriad Convention Center bringing Oklahoma merchants an estimated annual revenue of $8 million dollars.

In 2001 a landmark sponsorship agreement was achieved and Wrangler became the first title sponsor of the National Finals Rodeo. The agreement, part of the Professional Rodeo Cowboys Association's continuing effort to elevate professional rodeo to a new level, was made by PRCA Commissioner Steven J. Hatchell.

Oklahoma City has bid to return the NFR to Oklahoma, but is always outbid by the deep pockets of Las Vegas. However, starting in 2011, Oklahoma City will become host city of the DNCFR, which is the Finals for the PRCA's semi-pro series. This is seen as a step towards proving the crowds exist to bring the NFR back to Oklahoma City when Las Vegas' current contract ends in 2014. Also, the recent opening of the Ford Center in Oklahoma City, which is larger than the Thomas & Mack Center
Thomas & Mack Center
The Thomas & Mack Center is an arena, located on the campus of the University of Nevada, Las Vegas, in Las Vegas, Nevada, USA. For ring events, the capacity is 19,522, for basketball, the capacity is 18,776.-History:...
, may influence future bidding.