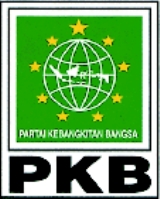 Encyclopedia
The National Awakening Party ( is an Islamist political party in Indonesia
Indonesia
Indonesia , officially the Republic of Indonesia , is a country in Southeast Asia and Oceania. Indonesia is an archipelago comprising approximately 13,000 islands. It has 33 provinces with over 238 million people, and is the world's fourth most populous country. Indonesia is a republic, with an...
. The party is led by Muhaimin Iskandar.

The story of PKB establishment began in May 11, 1998 when the elders Kyai held a meeting at Pesantren Langitan. They discussed the latest situation that demands changes to save Indonesian nation from destruction. As a result Kyai make an official letter to Pak Harto requested he fell or stepped down from the presidency. The meeting was sent Kyai Muchid Muzadi of Jember and Gus Yusuf Muhammad to deliver the letter and faced Soeharto. They went to Jakarta, asked for time but have not been able to schedule. So before receiving the letter, Soeharto had resigned prior dated May 23, 1998.

On May 30, 1998, Kyai-kyai held a grand istighosah in East Java. Then all the Kyai gathered in the office of East Java PWNU. All Kyai who attend the meeting urged KH Cholil Bisri to conceive and gave birth to a party of NU's political aspirations. He refused because he do not want to be too much involved in politics and feel better in the world of boarding schools (Pesantren) only. However, Kyais continued to push as he is considered more experience in political terms. At that Gus Dur has not participated in this meeting.

Then on June 6, 1998, KH Cholil Bisri invited 20 religious scholars –Kyai- to talk about it. Invitation sent only by phone. But on the day, more than 200 religious scholars –Kyai- attend the meeting. So his home in Leteh, Rembang, Central Java as a meeting place is full. During the meeting formed a committee called the team "Standing Committee" consisting of 11 persons. He himself became chairman of the "Standing Committee" and the secretary was Gus Yus. This committee works in a marathon to prepare the platform and party components including logos -which until now has become the official symbol of the party- created by KH.A. Mustofa Bisri. Also formed Lajnah Assistance Team also consists of 14 people, chaired by Matori Abdul Djalil and secretary Asnan Mulatif.

On June 18, 1998 the committee held a meeting with NU and continued hearings with political figures (NU) in Golkar, PDI and PPP. The committee offers them to join, without coercion. NU himself refused to establish a party.
After that on July 4, 1998, Tim 'Standing Committee' and team of NU held a major conference in Bandung and inviting the entire PWNU in Indonesia, which was attended by 27 representatives. On that day party’s name was decided. The proposed name was the National Awakening Party, the Party Kebangkitan Nahdlatul Ummah and Ummah Party. Finally, the chosen name is PKB (National Awakening Party). Then determined who should be party’s declaratory. They agreed that the party declared by 72 peoples, according to the age of NU organization. The amount was made up of Standing Committee Team (11), Lajnah Assistance Team (14), Team NU (5), NU Assistance Team (7), and Regional Representative (27 x 2). Also they put their signature on Party’s Platform and components.

The party's base of support is strongest in rural areas of Java, and draws from the constituency that formerly supported the conservative Muslim
Islam
Islam . The most common are and .   : Arabic pronunciation varies regionally. The first vowel ranges from ~~. The second vowel ranges from ~~~...
organization Nahdlatul Ulama. PKB differs substantially from Nahdlatul Ulama, though, in that while it supports a role for Islam in government, it does not share the older organization's support for an explicitly Islamic republic
Islamic republic
Islamic republic is the name given to several states in the Muslim world including the Islamic Republics of Pakistan, Iran, Afghanistan, and Mauritania. Pakistan adopted the title under the constitution of 1956. Mauritania adopted it on 28 November 1958. Iran adopted it after the 1979 Iranian...
.