Encyclopedia
Natalia Andreevna Pogonina (born March 9, 1985 in Vladivostok
Vladivostok
The city is located in the southern extremity of Muravyov-Amursky Peninsula, which is about 30 km long and approximately 12 km wide.The highest point is Mount Kholodilnik, the height of which is 257 m...
, Russian SFSR
Russian Soviet Federative Socialist Republic
The Russian Soviet Federative Socialist Republic , commonly referred to as Soviet Russia, Bolshevik Russia, or simply Russia, was the largest, most populous and economically developed republic in the former Soviet Union....
) is a Russian chess
Chess
Chess is a two-player board game played on a chessboard, a square-checkered board with 64 squares arranged in an eight-by-eight grid. It is one of the world's most popular games, played by millions of people worldwide at home, in clubs, online, by correspondence, and in tournaments.Each player...
Woman Grandmaster and member of the Russian Olympic chess team. 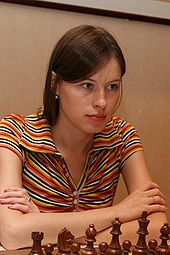 Pogonina learned to play chess at the age of five, as her grandfather taught her the basics of the game. She has been studying chess since 1993 after winning the school’s checkers tournament.

Her latest successes have been winning the gold medal in team blitz and bronze medal in team rapid chess at the first World Mind Sport Games in Beijing and scoring 6/7 on Board 5 (Russian team) in the Chess Olympiad
Chess Olympiad
The Chess Olympiad is a biennial chess tournament in which teams from all over the world compete against each other. The event is organised by FIDE, which selects the host nation.-Birth of the Olympiad:The first Olympiad was unofficial...
in 2008. She finished first (with 8 points from 9 games) at the prestigious Moscow Open 2009, and won the bronze medal at the European Women Championship 2009 (on tie-breaks). In 2011 Natalia Pogonina won gold medals at both the European Club Cup and the European Team Chess Championship.

In 2004, Natalia Pogonina was awarded the title of Woman Grandmaster. She is fifteenth on the July 2010 FIDE
Fédération Internationale des Échecs
The Fédération Internationale des Échecs or World Chess Federation is an international organization that connects the various national chess federations around the world and acts as the governing body of international chess competition. It is usually referred to as FIDE , its French acronym.FIDE...
women Elo rating list with a rating of 2501.

Natalia Pogonina defeated the World with White in a vote chess game that took part at Chess.com from December 23, 2009 to March 28, 2010. A few thousand players from over 100 countries participated. A re-match game against the World has been played at ChessGames.com and ended in a draw
Draw (chess)
In chess, a draw is when a game ends in a tie. It is one of the possible outcomes of a game, along with a win for White and a win for Black . Usually, in tournaments a draw is worth a half point to each player, while a win is worth one point to the victor and none to the loser.For the most part,...
. 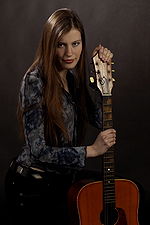 Pogonina is currently studying for an MA
Master of Arts (postgraduate)
A Master of Arts from the Latin Magister Artium, is a type of Master's degree awarded by universities in many countries. The M.A. is usually contrasted with the M.S. or M.Sc. degrees...
in law at the Saratov
Saratov
-Modern Saratov:The Saratov region is highly industrialized, due in part to the rich in natural and industrial resources of the area. The region is also one of the more important and largest cultural and scientific centres in Russia...
State Academy of Law. Her hobbies include flamenco
Flamenco
Flamenco is a genre of music and dance which has its foundation in Andalusian music and dance and in whose evolution Andalusian Gypsies played an important part....
, music, photography, travelling, sports, literature and poetry. Her handle on the Internet Chess Club
Internet Chess Club
The Internet Chess Club is a commercial Internet chess server devoted to the play and discussion of chess and chess variants. ICC currently has over 30,000 subscribing members...
is "Bagira".

After this 25-move victory with the Neo-Archangelsk variation of Ruy Lopez
Ruy Lopez
The Ruy Lopez, also called the Spanish Opening or Spanish Game, is a chess opening characterised by the moves:-History:The opening is named after the 16th century Spanish priest Ruy López de Segura, who made a systematic study of this and other openings in the 150-page book on chess Libro del...
over former FIDE Women's World Champion Antoaneta Stefanova
Antoaneta Stefanova
Antoaneta Stefanova is a Bulgarian chess grandmaster, and a former Women's World Chess Champion. She became the twelfth holder of that title in 2004 in a 64-player knockout tournament held in Elista, Kalmykia under the auspices of FIDE....
, Natalia Pogonina became co-leader in the North Urals Cup-2007 tournament. (Analysis by T. Grabuzova, ChessPro)