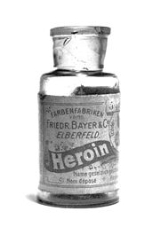 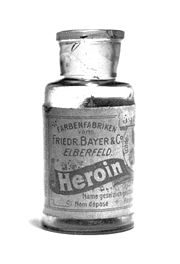 The term narcotic originally referred medically to any psychoactive
Psychoactive drug
A psychoactive drug, psychopharmaceutical, or psychotropic is a chemical substance that crosses the blood–brain barrier and acts primarily upon the central nervous system where it affects brain function, resulting in changes in perception, mood, consciousness, cognition, and behavior...
compound with any sleep-inducing properties. In the United States of America it has since become associated with opioids, commonly morphine
Morphine
Morphine is a potent opiate analgesic medication and is considered to be the prototypical opioid. It was first isolated in 1804 by Friedrich Sertürner, first distributed by same in 1817, and first commercially sold by Merck in 1827, which at the time was a single small chemists' shop. It was more...
and heroin and their derivatives
Derivative (chemistry)
In chemistry, a derivative is a compound that is derived from a similar compound by some chemical or physical process. In the past it was also used to mean a compound that can be imagined to arise from another compound, if one atom is replaced with another atom or group of atoms, but modern...
, such as hydrocodone
Hydrocodone
Hydrocodone or dihydrocodeinone is a semi-synthetic opioid derived from either of two naturally occurring opiates: codeine and thebaine. It is an orally active narcotic analgesic and antitussive...
. The term is, today, imprecisely defined and typically has negative connotations. When used in a legal context in the US, a narcotic drug is simply one that is totally prohibited, or one that is used in violation of strict governmental regulation, such as heroin or morphine.

From a pharmacological standpoint it is not a useful term, as is evidenced by the historically varied usage of the word.
Statutory classification of a drug as a narcotic often increases the penalties for violation of drug control statutes. For example, although federal law classifies both cocaine
Cocaine
Cocaine is a crystalline tropane alkaloid that is obtained from the leaves of the coca plant. The name comes from "coca" in addition to the alkaloid suffix -ine, forming cocaine. It is a stimulant of the central nervous system, an appetite suppressant, and a topical anesthetic...
and amphetamines as "Schedule II" drugs, the penalty for possession of cocaine is greater than the penalty for possession of amphetamines because cocaine, unlike amphetamines, is classified as a narcotic.

The adoption of this Convention is regarded as a milestone in the history of international drug control. The Single Convention
Single Convention on Narcotic Drugs
The Single Convention on Narcotic Drugs of 1961 is an international treaty to prohibit production and supply of specific drugs and of drugs with similar effects except under licence for specific purposes, such as medical treatment and research...
codified all existing multilateral treaties on drug control and extended the existing control systems to include the cultivation of plants that were grown as the raw material of narcotic drugs. The principal objectives of the Convention are to limit the possession, use, trade in, distribution, import, export, manufacture and production of drugs exclusively to medical and scientific purposes and to address drug trafficking through international cooperation to deter and discourage drug traffickers. The Convention also established the International Narcotics Control Board, merging the Permanent Central Board and the Drug Supervisory Board.

The 1961 Convention exercises control over more than 116 narcotic drugs. They include mainly plant-based products such as opium and its derivatives morphine, codeine and heroin, but also synthetic narcotics such as methadone and pethidine, as well as cannabis, coca and cocaine. The Convention divides drugs into four groups, or schedules, in order to enforce a greater or lesser degree of control for the various substances and compounds. Opium smoking and eating, coca leaf chewing, cannabis resin smoking and the non-medical use of cannabis are prohibited. The 1972 Protocol to this Convention calls for increased efforts to prevent illicit production of, traffic in and use of narcotics. It also highlights the need to provide treatment and rehabilitation services to drug abusers.


UNODC Terminology and Information on Drugs

In the context of international drug control, “narcotic drug” means any drug
defined as such under the 1961 Convention.


Studies on the Definition of "Counterfeit Medicines" in WHO Member States

4. Assessment of the definitions of "counterfeit medicines" (or equivalent) in Member States

4.2 The nature of legal definitions: the unambiguity requirement

In order to avoid room for difference in interpretation, law-makers ("codificators") sometimes deviate from etymological (definiendum plus definientia) definitions. In doing so, they approach the term from the law enforcement point of view.
The best example is the definition of "narcotics" in the United Nations Conventions. Narcotics are substances and preparations that induce drowsiness, sleep, stupor, insensibility, etc., and that these effects (and their rate) are complicated to prove, e.g. during litigation. Thus, the legal "definition" of a narcotic is whether or not it is listed on the Schedules of the Convention. If it is on some of the Schedules, it is narcotic.

A chemical agent that induces stupor, coma, or insensibility to pain. The term usually refers to opiates or opioids, which are called narcotic analgesics. In common parlance and legal usage, it is often used imprecisely to mean illicit drugs, irrespective of their pharmacology. For example, narcotics control legislation in Canada, USA, and certain other countries includes cocaine and cannabis as well as opioids (see also conventions, international drug). Because of this variation in usage, the term is best replaced by one with a more specific meaning (e.g. opioid).

(b) As used in parts 1301 through 1308 and part 1312 of this chapter, the following terms shall have the meanings specified:

(iii) Coca leaves, except coca leaves and extracts of coca leaves from which cocaine, ecgonine
Ecgonine
Ecgonine is an organic chemical and tropane alkaloid found naturally in coca leaves. It has a close structural relation to cocaine: it is both a metabolite and a precursor, and as such, it is a controlled substance, as are all known substances which can be used as precursors to ecgonine...
and derivatives of ecgonine or their salts have been removed.

(iv) Cocaine, its salts, optical and geometric isomers, and salts of isomers.

(v) Ecgonine, its derivatives, their salts, isomers and salts of isomers.

(vi) Any compound, mixture, or preparation which contains any quantity of any of the substances referred to in paragraphs (b)(31)(i) through (v) of this section.

John Arthur Stieren appeals from the judgment of conviction for possession of cocaine with intent to distribute and dispense under 21 U.S.C. § 841(a)(1). Stieren contends that the statute is unconstitutional because "cocaine is classified as a narcotic under Schedule II of 21 U.S.C. § 812(c), when as a matter of scientific and medical fact cocaine is not a narcotic but is a non-narcotic stimulant."

The sufficiency of the evidence is not disputed. Stieren was convicted after special agents testified that he was in possession of and attempted to sell them a large quantity of cocaine. Defendant urges that the testimony and reports by physicians and scientists demonstrate that cocaine is not a narcotic. He also cites cases which hold that cocaine is not a narcotic under the pharmacological definition of the term. State v. Erickson, 574 P.2d 1 (Alaska 1978).

It is within the legislative prerogative to classify cocaine, which is a non-narcotic central nervous system stimulant, as a narcotic for penalty and regulatory purposes. 21 U.S.C. § 802(16)(A). The use of cocaine poses serious problems for the community and has a high potential for abuse. Congress' choice of penalty reflects a societal policy which must be adhered to by the courts.2 Congress has the power to reclassify cocaine. This power has been delegated to the Attorney General. 21 U.S.C. § 811(a)(1). If cocaine is to be reclassified, defendant's arguments should be made to the legislative branch, not the courts.

We hold that Congress had a rational legislative purpose when it classified cocaine as a Schedule II narcotic drug for the purpose of imposing penalties.

The term "narcotic" is believed to have been coined by the Greek physician Galen
Galen
Aelius Galenus or Claudius Galenus , better known as Galen of Pergamon , was a prominent Roman physician, surgeon and philosopher...
to refer to agents that numb or deaden, causing loss of feeling or paralysis. It is based on the Greek word ναρκωσις (narcosis), the term used by Hippocrates
Hippocrates
Hippocrates of Cos or Hippokrates of Kos was an ancient Greek physician of the Age of Pericles , and is considered one of the most outstanding figures in the history of medicine...
for the process of numbing or the numbed state. Galen listed mandrake
Mandrake (plant)
Mandrake is the common name for members of the plant genus Mandragora, particularly the species Mandragora officinarum, belonging to the nightshades family...
root, altercus (eclata). seeds, and poppy juice
Poppy tea
Poppy tea is an infusion brewed from poppy straw or seeds of several species of poppy. The species most commonly used for this purpose is Papaver somniferum, which contains opium....
(opium
Opium
Opium is the dried latex obtained from the opium poppy . Opium contains up to 12% morphine, an alkaloid, which is frequently processed chemically to produce heroin for the illegal drug trade. The latex also includes codeine and non-narcotic alkaloids such as papaverine, thebaine and noscapine...
) as the chief examples. It originally referred to any substance that relieved pain, dulled the senses, or induced sleep. Now, the term is used in a number of ways. Some people define narcotics as substances that bind at opioid receptor
Opioid receptor
Opioid receptors are a group of G protein-coupled receptors with opioids as ligands. The endogenous opioids are dynorphins, enkephalins, endorphins, endomorphins and nociceptin. The opioid receptors are ~40% identical to somatostatin receptors...
s (cellular membrane proteins activated by substances like heroin or morphine) while others refer to any illicit substance as a narcotic. From a legal perspective, narcotic refers to opium, opium derivatives, and their semi-synthetic substitutes. Though in U.S. law, due to its numbing properties, cocaine is also considered a narcotic.