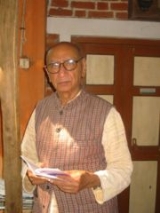 Encyclopedia
Narayan Desai, son of Mahatma Gandhi
Mahatma Gandhi
Mohandas Karamchand Gandhi , pronounced . 2 October 1869 – 30 January 1948) was the pre-eminent political and ideological leader of India during the Indian independence movement...
's personal secretary and biographer Mahadev Desai
Mahadev Desai
Mahadev Desai was an Indian independence activist and nationalist writer; he was most famously known for being the personal secretary of Mahatma Gandhi.-Career:...
, was born on December 24, 1924, in Bulsar, Gujarat. Brought up in Gandhi's Ashram
Sabarmati Ashram
Sabarmati Ashram is located in the Ahmedabad suburb of Sabarmati adjoining to famous Ashram Road, at the bank of River Sabarmati, 4 miles from the town hall. This was one of the residences of Mohandas Karamchand Gandhi...
in Sabarmati, Ahmedabad
Ahmedabad
Ahmedabad also known as Karnavati is the largest city in Gujarat, India. It is the former capital of Gujarat and is also the judicial capital of Gujarat as the Gujarat High Court has its seat in Ahmedabad...
and Sevagram near Wardha, Narayan stopped attending school to be educated and trained by his father and other inmates of the Ashram. He specialized in basic education, spinning and weaving khadi.

After his marriage to Uttara Chaudhury, daughter of freedom fighter parents, Nabakrushna Chaudhury and Malatidevi Chaudhury, the young couple moved to Vedchhi, a tribal village 60 km from Surat in Gujarat, to work as teachers in a Nai Taleem school. Following the Bhoodan (land gift) movement launched by Vinoba Bhave
Vinoba Bhave
Vinoba Bhave , born Vinayak Narahari Bhave often called Acharya , was an Indian advocate of nonviolence and human rights. He is best known for the Bhoodan Andolan...
, Narayan traversed through the length and breadth of Gujarat, by foot, collecting land from the rich and distributing the same among the poor landless villagers. He started the mouthpiece of Bhoodan movement, titled Bhoomiputra (Son of the Soil) and remained its editor till 1959.

Narayan joined the Akhil Bharatiya Shanti Sena Mandal (Indian Peace Brigade), founded by Vinoba and headed by veteran socialist leader Jayaprakash Narayan
Jayaprakash Narayan
Jayaprakash Narayan , widely known as JP Narayan, Jayaprakash, or Loknayak, was an Indian independence activist and political leader, remembered especially for leading the opposition to Indira Gandhi in the 1970s and for giving a call for peaceful Total Revolution...
(widely known as "JP"). As the general secretary of the Shanti Sena, Narayan recruited and trained peace volunteers throughout the country who intervened during ethnic conflicts and helped establish harmony among conflicting communities.

Narayan was active in the campaign against the imposition of emergency in India and brought out a magazine defying the censorship laws. As a close associate of JP, Narayan played an important role in helping the newly formed Janata Party
Janata Party
The Janata Party was an amalgam of Indian political parties opposed to the state of emergency imposed by the government of Prime Minister Indira Gandhi and her Indian National Congress...
, a conglomeration of major non-Congress political parties in India, arrive at a consensus on the name of Morarji Desai
Morarji Desai
Morarji Ranchhodji Desai was an Indian independence activist and the fourth Prime Minister of India from 1977–79. He was the first Indian Prime Minister who did not belong to the Indian National Congress...
as the Prime Minister. 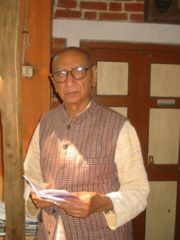 Following JP's death, Narayan moved to Vedchhi and set up the Institute for Total Revolution. The Institute imparts training in non-violence and Gandhian way of life. Narayan, as a way of paying tribute to his father, Mahadev Desai, wrote a four-volume biography of Gandhi in Gujarati, a dream his father could not fulfil in his lifetime because of his sudden death in prison on 15 August 1942.

Narayan was accorded the Sahitya Akademi Award for Gujarati in 1993 for the biography of his father Mahadev Desai he wrote as part of the centenary celebrations of Gandhi's close aide. Earlier, Narayan's book about his childhood reminiscences of Gandhi too had won the Sahitya Academy Award.