Overview
Morarji Ranchhodji Desai (29 February 1896 – 10 April 1996) was an Indian independence activist
Indian independence activists
This is a listing of people who campaigned against or are considered to have campaigned against foreign domination and cultural imposition on the Indian sub-continent...
and the fourth Prime Minister of India
Prime Minister of India
The Prime Minister of India , as addressed to in the Constitution of India — Prime Minister for the Union, is the chief of government, head of the Council of Ministers and the leader of the majority party in parliament...
from 1977–79. He was the first Indian Prime Minister who did not belong to the Indian National Congress
Indian National Congress
The Indian National Congress is one of the two major political parties in India, the other being the Bharatiya Janata Party. It is the largest and one of the oldest democratic political parties in the world. The party's modern liberal platform is largely considered center-left in the Indian...
. After assuming the office, Desai promoted his policies and peace initiatives between Pakistan and India to avoid conflicts, such as Indo-Pakistani war of 1971.

Correction abt family of Morarji Desai needs to be posted.
More 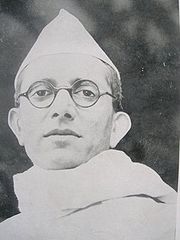 Before the independence of India, he became Bombay's Home Minister and later was elected as Chief Minister of Bombay State
Bombay State
The Bombay State was a state of India, dissolved with the formation of Maharashtra and Gujarat states on May 1, 1960.-History:During British rule, portions of the western coast of India under direct British rule were part of the Bombay Presidency...
in 1952. The state was home to Marathi linguistic movements, with calls for the creation of a separate linguistic state. Considered as a tough leader, Desai was also known for pioneering beliefs and enforcing strict discipline and authority. By Desai's orders in 1960, a demonstration by the Samyukta Maharashtra Samiti
Samyukta Maharashtra Samiti
http://ekmarathimanoos.blogspot.com/2009/01/belgaum-border-dispute-bleeding-wound.htmlSanyukta Maharashtra Samiti , roughly translated as United Maharashtra Committee, was an organisation that spearheaded the demand in the 1950s for the creation of a separate Marathi-speaking state out of the ...
was fired upon by the police resulting in the deaths of 105 demonstrators. 105 demonstrators were killed in the incident leading to public outrage that shook the central government. The incident led to the formation of the present State of Maharashtra.

As Home Minister, Desai outlawed any portrayals of indecency (which included "kissing" scenes) in films and theatrical productions. Although a staunch Gandhian
Mahatma Gandhi
Mohandas Karamchand Gandhi , pronounced . 2 October 1869 – 30 January 1948) was the pre-eminent political and ideological leader of India during the Indian independence movement...
, Desai was socially conservative, pro-business, and in favour of free enterprise reforms, as opposed to Prime Minister Jawaharlal Nehru
Jawaharlal Nehru
Jawaharlal Nehru , often referred to with the epithet of Panditji, was an Indian statesman who became the first Prime Minister of independent India and became noted for his “neutralist” policies in foreign affairs. He was also one of the principal leaders of India’s independence movement in the...
's socialistic policies.

Rising in Congress leadership, Desai was at odds with Prime Minister Nehru and his allies, and with Nehru's age and health failing, he was considered as a possible contender for the position of Prime Minister. Outflanked in the leadership contest after Nehru's death in 1964 by the Nehruvian Lal Bahadur Shastri
Lal Bahadur Shastri
Lal Bahadur Srivastava Shastri was the second Prime Minister of the Republic of India and a significant figure in the Indian independence movement.-Early life:...
, Desai remained content to build support within the ranks.

Morarji Desai became the prime minister after the landslide victory of the Janata coalition in 1977. The coation, later the janata party, was full of personal and policy friction and thus failed to achieve much owing to continuous in-wrangling and much controversy. With no party in leadership of the coalition, rival groups vied to unseat Desai. Controversial trials of prominent Congress leaders, including Indira Gandhi over Emergency-era abuses worsened the fortunes of his administration. Desai worked to improve relations with neighbour and arch-rival Pakistan
Pakistan
Pakistan , officially the Islamic Republic of Pakistan is a sovereign state in South Asia. It has a coastline along the Arabian Sea and the Gulf of Oman in the south and is bordered by Afghanistan and Iran in the west, India in the east and China in the far northeast. In the north, Tajikistan...
and restored normal relations with China, for the first time since the 1962 war
Sino-Indian War
The Sino-Indian War , also known as the Sino-Indian Border Conflict , was a war between China and India that occurred in 1962. A disputed Himalayan border was the main pretext for war, but other issues played a role. There had been a series of violent border incidents after the 1959 Tibetan...
. He communicated with Zia-ul-Haq and established friendly relations. Diplomatic relations were also re-established with China. His government undid many amendments made to the constitution during emergency and made it difficult for any future government to impose national emergency.

Since India's first nuclear test in 1974, Desai kept India's nuclear reactors stating "they will never be used for atomic bombs, and I will see to it if I can help it". http://www.time.com/time/magazine/article/0,9171,947858-2,00.html In 1977, the Carter administration
Jimmy Carter
James Earl "Jimmy" Carter, Jr. is an American politician who served as the 39th President of the United States and was the recipient of the 2002 Nobel Peace Prize, the only U.S. President to have received the Prize after leaving office...
sold India, heavy water
Heavy water
Heavy water is water highly enriched in the hydrogen isotope deuterium; e.g., heavy water used in CANDU reactors is 99.75% enriched by hydrogen atom-fraction...
and uranium
Uranium
Uranium is a silvery-white metallic chemical element in the actinide series of the periodic table, with atomic number 92. It is assigned the chemical symbol U. A uranium atom has 92 protons and 92 electrons, of which 6 are valence electrons...
for its nuclear reactors but required American on-site inspection of nuclear materials. Desai declined, seeing the American stance as contradictory, in light of its own nuclear arsenal. http://www.time.com/time/magazine/article/0,9171,919248-3,00.html

In 1979, Raj Narain
Raj Narain
Raj Narain was an Indian politician who, as a candidate of Janata Party for the Lok Sabha in 1977, ran for office in Rae Bareli constituency and defeated Indira Gandhi, the then Prime Minister of India...
and Charan Singh
Choudhary Charan Singh
Chaudhary Charan Singh was the fifth Prime Minister of the Republic of India, serving from 28 July 1979 until 14 January 1980.Born into a Jat family in 1902, Charan Singh entered politics as part of the Independence Movement...
pulled out of the Janata Party, forcing Desai to resign from office and retire from politics at the age of 83. Desai campaigned for Janata Party in 1980 General Election as a senior politician but did not contest the election himself.

In retirement, he lived in Mumbai
Mumbai
Mumbai , formerly known as Bombay in English, is the capital of the Indian state of Maharashtra. It is the most populous city in India, and the fourth most populous city in the world, with a total metropolitan area population of approximately 20.5 million...
, and died at the age of 100. He had been honoured much in his last years as a freedom-fighter of his generation.

Morarji Desai is most often remembered for his championing of Urine Therapy
Urine therapy
In alternative medicine, the term urine therapy refers to various applications of human urine for medicinal or cosmetic purposes, including drinking of one's own urine and massaging one's skin with one's own urine...
. He told journalist Khushwant Singh
Khushwant Singh
Khushwant Singh is a prominent Indian novelist and journalist. Singh's weekly column, "With Malice towards One and All", carried by several Indian newspapers, is among the most widely-read columns in the country....
that he was advised to try drinking his own urine when in his 40s to cure piles (hemorrhoids), and he got immediate results. Thereafter he continued the practice and was quite open about it, saying that you should not do anything you would be ashamed of.

Morarji Desai was a strict follower of Mahatma Gandhi
Mahatma Gandhi
Mohandas Karamchand Gandhi , pronounced . 2 October 1869 – 30 January 1948) was the pre-eminent political and ideological leader of India during the Indian independence movement...
's principles and a moralist.
He was a vegetarian “both by birth and by conviction.”

Morarji Desai had described the Research and Analysis Wing
Research and Analysis Wing
The Research and Analysis Wing is India's external intelligence agency. It was formed in September 1968 after the poor performance of the Intelligence Bureau in the Sino-Indian war of 1962 and the India-Pakistani war of 1965 convinced the then government of India that a specialized, independent...
(R&AW), India's external intelligence agency, as the praetorian guard of Indira Gandhi
Indira Gandhi
Indira Priyadarshini Gandhara was an Indian politician who served as the third Prime Minister of India for three consecutive terms and a fourth term . She was assassinated by Sikh extremists...
and had promised to stop all activities of the R&AW after becoming prime minister. He closed down much of the agency, and reduced its budget and operations. B. Raman, the former head of the Counter-Terrorism Division of R&AW and noted security analyst, reveals that, in an unguarded moment, Morarji Desai indiscreetly told Pakistan's Chief Martial Law Administrator
Chief Martial Law Administrator
The office of the Chief Martial Law Administrator was a senior government post created in countries such as Pakistan, Bangladesh and Indonesia that gave considerable executive authority and powers to the holder of the post to enforce martial law in the country. This office has been used mostly by...
General Zia ul-Haq that his government was well aware of Pakistan's nuclear development.

Morarji Desai was a true Gandhian follower, social worker, institution builder and a great reformer. He was the Chancellor of Gujarat Vidyapith (university established by Mahatma Gandhi). Even during his term as the Prime Minister he used to visit and stay at Vidyapith during the month of October. He exemplified simplicity and used to write post cards himself even when he held the office of Prime Minister. Sardar Patel deputed him to conduct meetings of farmers in Kaira district which finally led to the establishment of the AMUL Cooperative movement. During his rule, he withdrew intervention in Public Distribution System and rationing shops were literally lost due to cheap sugar and oil available in the market.