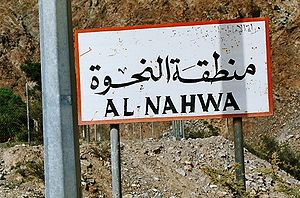 To reach the village of Nahwa, take the northernmost road into the Madha enclave south of Khor Fakkan
Khor Fakkan
Khor Fakkan is a town located along the Gulf of Oman on the east coast of the United Arab Emirates . The town is set on the picturesque bay of Khor Fakkan, which means "Creek of Two Jaws". Khor Fakkan belongs to the emirate of Sharjah but is geographically surrounded by the emirate of Fujairah...
and follow the signs to New Madha. From New Madha there is a paved but winding road (about 5 km) leading to Nahwa.

Entering Nahwa there is an Emirati police outpost some 80 metres after the
boundary marker
Boundary marker
A boundary marker, boundary stone or border stone is a robust physical marker that identifies the start of a land boundary or the change in a boundary, especially a change in a direction of a boundary...
. The village itself is further up the road, on the same side as the police out-post. It consists of about 40 buildings and has its own clinic. This part of the village is in fact called New Nahwa, and there are more houses further down the road in Old Nahwa.