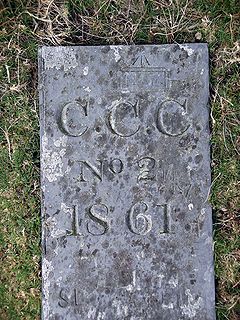 A boundary marker, boundary stone or border stone is a robust physical marker that identifies the start of a land boundary
Border
Borders define geographic boundaries of political entities or legal jurisdictions, such as governments, sovereign states, federated states and other subnational entities. Some borders—such as a state's internal administrative borders, or inter-state borders within the Schengen Area—are open and...
or the change in a boundary, especially a change in a direction of a boundary. They have often been used to mark critical points on boundaries between countries
Country
A country is a region legally identified as a distinct entity in political geography. A country may be an independent sovereign state or one that is occupied by another state, as a non-sovereign or formerly sovereign political division, or a geographic region associated with a previously...
or local administrations but have also been used to mark out the limits of private land-holdings especially in areas where fence
Fence
A fence is a freestanding structure designed to restrict or prevent movement across a boundary. It is generally distinguished from a wall by the lightness of its construction: a wall is usually restricted to such barriers made from solid brick or concrete, blocking vision as well as passage .Fences...
s or wall
Wall
A wall is a usually solid structure that defines and sometimes protects an area. Most commonly, a wall delineates a building and supports its superstructure, separates space in buildings into rooms, or protects or delineates a space in the open air...
s are impractical or unnecessary.

Boundary markers are often made of stone
Rock (geology)
In geology, rock or stone is a naturally occurring solid aggregate of minerals and/or mineraloids.The Earth's outer solid layer, the lithosphere, is made of rock. In general rocks are of three types, namely, igneous, sedimentary, and metamorphic...
and are typically placed at a notable or especially visible point. Many are inscribed with relevant information such as the abbreviation of the boundary holder and often a date.

Boundary markers may be used to mark property boundaries (land-ownership), or political boundaries.

In developed countries use of markers for land-ownership has in many places been replaced by maps and land ownership registration. Markers are still used extensively for marking international borders; international boundary markers are placed and maintained by mutual agreement of the bordering countries.