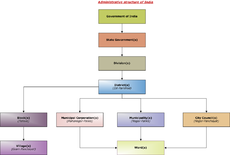 Nagar nigam or municipal corporation
Municipal corporation
A municipal corporation is the legal term for a local governing body, including cities, counties, towns, townships, charter townships, villages, and boroughs. Municipal incorporation occurs when such municipalities become self-governing entities under the laws of the state or province in which...
s in India
India
India , officially the Republic of India , is a country in South Asia. It is the seventh-largest country by geographical area, the second-most populous country with over 1.2 billion people, and the most populous democracy in the world...
are state government formed departments that works for the development of a city, which has a population of more than one million. The growing population and urbanization in various cities of India were in need of a local governing body that can work for providing necessary community services like health centres, educational institutes and housing and property tax.

They are formed under the Corporations Act of 1835 of Panchayati Raj system which mainly deals in providing essential services in every small town as well as village of a district/city. Their elections are held once in five year and the people choose the candidates. The largest corporations are in the four metropolitan cities of India; Delhi
Delhi
Delhi , officially National Capital Territory of Delhi , is the largest metropolis by area and the second-largest by population in India, next to Mumbai. It is the eighth largest metropolis in the world by population with 16,753,265 inhabitants in the Territory at the 2011 Census...
, Mumbai
Mumbai
Mumbai , formerly known as Bombay in English, is the capital of the Indian state of Maharashtra. It is the most populous city in India, and the fourth most populous city in the world, with a total metropolitan area population of approximately 20.5 million...
, Kolkatta and Chennai
Chennai
Chennai , formerly known as Madras or Madarasapatinam , is the capital city of the Indian state of Tamil Nadu, located on the Coromandel Coast off the Bay of Bengal. Chennai is the fourth most populous metropolitan area and the sixth most populous city in India...
. These cities not only have a large population, but are also the administrative as well as commercial centres of the country. 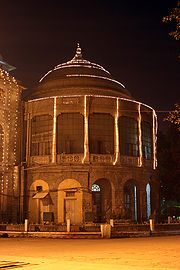 Its sources of income are tax
Tax
To tax is to impose a financial charge or other levy upon a taxpayer by a state or the functional equivalent of a state such that failure to pay is punishable by law. Taxes are also imposed by many subnational entities...
es on water, houses, markets, entertainment and vehicles paid by residents of the town and grants from the state government.

Our Civic Life (Civics and Administration) Maharashtra State Bureau of Textbook Production and Curriculum Research, Pune
The source of this article is wikipedia, the free encyclopedia.  The text of this article is licensed under the GFDL.