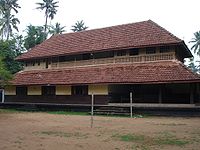 Nālukettu is the traditional homestead of old Tharavadu
Tharavadu
Tharavad is a system of joint family practised by people in Kerala, especially Nairs. Tharavadu was a legal entity like a Hindu Undivided Family as per Indian Income Tax laws, and was entitled to own properties. The others, like Namboothriris, Ezhavas, Christians and Muslims also now refer to...
where many generations of a matrilineal family lived. These types of buildings are typically found in the India
India
India , officially the Republic of India , is a country in South Asia. It is the seventh-largest country by geographical area, the second-most populous country with over 1.2 billion people, and the most populous democracy in the world...
n state of Kerala
Kerala
or Keralam is an Indian state located on the Malabar coast of south-west India. It was created on 1 November 1956 by the States Reorganisation Act by combining various Malayalam speaking regions....
. The traditional architecture is typically a rectangular structure where four halls are joined together with a central court yard open to the sky. The four halls on the sides are named Vadakkini (northern block), Padinjattini (western block), Kizhakkini (eastern block) and Thekkini (southern block). The architecture was especially catered to large families of the traditional tharavadu, to live under one roof and enjoy the commonly owned facilities of the marumakkathayam
Marumakkathayam
Marumakkathayam is a matrilinear system of inheritance which was followed by all Nair castes including of Royal Families, some of the Ambalavasis, Arayars, Ezhava, some tribal groups and Mappilas in North Malabar of Kerala state, South India. Unlike other Brahmin families, Payanoor Nambootiris...
homestead. 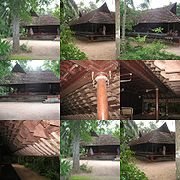 Thatchu Shasthra, or the Science of Carpentry and Traditional Vasthu, was the governing science in this architectural form. This branch of knowledge was well developed in the traditional architecture of Kerala and has created its own branch of literature known under the names of Tantrasamuchaya, Vastuvidya, Manushyalaya-Chandrika, and Silparatna.

The lay out of these homes were simple, and catered to the dwelling of the large number of people usually part of a tharavaadu. Ettukettu (eight halled with two central courtyards) or Pathinarukettu (sixteen halled with four central courtyards) are the more elaborate forms of the same architecture. Every structure faces the sunlight, and in some well designed naalukettu, there is excellent ventilation. Temperatures, even in the heat of summer, are markedly lower within the naalukettu.