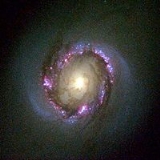 Encyclopedia
NGC 4314 is a barred spiral galaxy
Barred spiral galaxy
A barred spiral galaxy is a spiral galaxy with a central bar-shaped structure composed of stars. Bars are found in approximately two-thirds of all spiral galaxies...
approximately 40 million light-years away in the constellation
Constellation
In modern astronomy, a constellation is an internationally defined area of the celestial sphere. These areas are grouped around asterisms, patterns formed by prominent stars within apparent proximity to one another on Earth's night sky....
Coma Berenices
Coma Berenices
Coma Berenices is a traditional asterism that has since been defined as one of the 88 modern constellations. It is located near Leo, to which it formerly belonged, and accommodates the North Galactic Pole...
. Perhaps the most prominent and unusual feature is its "nuclear starbust ring" of bright young stars. These rings are thought to be due in part to Lindblad resonance
Lindblad resonance
A Lindblad resonance, named for the Swedish galactic astronomer Bertil Lindblad, is an orbital resonance in which an object's epicyclic frequency is a simple multiple of some forcing frequency...
. It is thought that this explosion of star formation has occurred over the past few millions of years. This time frame is remarkably short in astronomical terms because most main sequence
Main sequence
The main sequence is a continuous and distinctive band of stars that appears on plots of stellar color versus brightness. These color-magnitude plots are known as Hertzsprung–Russell diagrams after their co-developers, Ejnar Hertzsprung and Henry Norris Russell...
stars have lifetimes of billions of years and their birth is not usually uniform throughout a galaxy. Further study will be required to understand more about the evolution of such ring structures in galaxies.