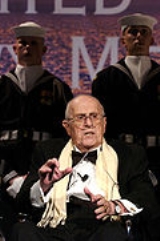 Encyclopedia
The National Basketball Association's Coach of the Year is an annual National Basketball Association
National Basketball Association
The National Basketball Association is the pre-eminent men's professional basketball league in North America. It consists of thirty franchised member clubs, of which twenty-nine are located in the United States and one in Canada...
(NBA) award given since the 1962–63 NBA season. The winner receives the Red Auerbach
Red Auerbach
Arnold Jacob "Red" Auerbach was an American basketball coach of the Washington Capitols, the Tri-Cities Blackhawks and the Boston Celtics. After he retired from coaching, he served as president and front office executive of the Celtics until his death...
Trophy, which is named in honor of the head coach who led the Boston Celtics
Boston Celtics
The Boston Celtics are a National Basketball Association team based in Boston, Massachusetts. They play in the Atlantic Division of the Eastern Conference. Founded in 1946, the team is currently owned by Boston Basketball Partners LLC. The Celtics play their home games at the TD Garden, which...
to nine NBA Championships from 1956 to 1966. The winner is selected at the end of regular season by a panel of sportswriters from the United States
United States
The United States of America is a federal constitutional republic comprising fifty states and a federal district...
and Canada
Canada
Canada is a North American country consisting of ten provinces and three territories. Located in the northern part of the continent, it extends from the Atlantic Ocean in the east to the Pacific Ocean in the west, and northward into the Arctic Ocean...
, each of whom casts a vote for first, second and third place selections. Each first-place vote is worth five points; each second-place vote is worth three points; and each third-place vote is worth one point. The person with the highest point total, regardless of the number of first-place votes, wins the award.