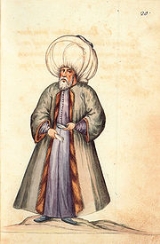 This article is about an Islamic scholar. Mufti can also refer to civilian dress
Mufti (dress)
for more information see civilians Mufti, or civies/civvies , refers to ordinary clothes, especially when worn by one who normally wears, or has long worn, a military or other uniform.-Origin:...
.


A mufti ' onMouseout='HidePop("29890")' href="/topics/Turkish_language">Turkish
Turkish language
Turkish is a language spoken as a native language by over 83 million people worldwide, making it the most commonly spoken of the Turkic languages. Its speakers are located predominantly in Turkey and Northern Cyprus with smaller groups in Iraq, Greece, Bulgaria, the Republic of Macedonia, Kosovo,...
: müftü) is a Sunni Islam
Islam
Islam . The most common are and .   : Arabic pronunciation varies regionally. The first vowel ranges from ~~. The second vowel ranges from ~~~...
ic scholar who is an interpreter or expounder of Islamic law (Sharia
Sharia
Sharia law, is the moral code and religious law of Islam. Sharia is derived from two primary sources of Islamic law: the precepts set forth in the Quran, and the example set by the Islamic prophet Muhammad in the Sunnah. Fiqh jurisprudence interprets and extends the application of sharia to...
). In religious administrative terms, a mufti is roughly equivalent to a deacon
Deacon
Deacon is a ministry in the Christian Church that is generally associated with service of some kind, but which varies among theological and denominational traditions...
to a Sunni population. A muftiat or diyanet is a council of muftis.

A Mufti will generally go through an Iftaa course and the person should fulfill the following conditions set by scholars in order that he may be able to issue verdicts (fataawa). They are eight:

The authority of the Mufti

An example of the influence of the mufti can be taken from this incident in Tunisia: Habib Bourguiba
Habib Bourguiba
Habib Bourguiba was a Tunisian statesman, the Founder and the first President of the Republic of Tunisia from July 25, 1957 until 7 November 1987...
, the late President of Tunisia
Tunisia
Tunisia , officially the Tunisian RepublicThe long name of Tunisia in other languages used in the country is: , is the northernmost country in Africa. It is a Maghreb country and is bordered by Algeria to the west, Libya to the southeast, and the Mediterranean Sea to the north and east. Its area...
, once argued in 1961 (1381 Muslim Calendar) that "fasting
Fasting
Fasting is primarily the act of willingly abstaining from some or all food, drink, or both, for a period of time. An absolute fast is normally defined as abstinence from all food and liquid for a defined period, usually a single day , or several days. Other fasts may be only partially restrictive,...
" during Ramadan
Ramadan
Ramadan is the ninth month of the Islamic calendar, which lasts 29 or 30 days. It is the Islamic month of fasting, in which participating Muslims refrain from eating, drinking, smoking and sex during daylight hours and is intended to teach Muslims about patience, spirituality, humility and...
should not be observed for it reduces productivity. He then appeared on television with his cabinet, eating and drinking during Ramadan. Bourguiba then asked the Grand Mufti
Grand Mufti
The title of Grand Mufti refers to the highest official of religious law in a Sunni or Ibadi Muslim country. The Grand Mufti issues legal opinions and edicts, fatwā, on interpretations of Islamic law for private clients or to assist judges in deciding cases...
of Tunisia, Sheikh
Sheikh
Not to be confused with sikhSheikh — also spelled Sheik or Shaikh, or transliterated as Shaykh — is an honorific in the Arabic language that literally means "elder" and carries the meaning "leader and/or governor"...
Altaher Ibn Ashoor , to issue a fatwa
Fatwa
A fatwā in the Islamic faith is a juristic ruling concerning Islamic law issued by an Islamic scholar. In Sunni Islam any fatwā is non-binding, whereas in Shia Islam it could be considered by an individual as binding, depending on his or her relation to the scholar. The person who issues a fatwā...
accommodating the desires of the state.

The Grand Mufti
Grand Mufti
The title of Grand Mufti refers to the highest official of religious law in a Sunni or Ibadi Muslim country. The Grand Mufti issues legal opinions and edicts, fatwā, on interpretations of Islamic law for private clients or to assist judges in deciding cases...
of Tunisia went on television and and read sura
Sura
A sura is a division of the Qur'an, often referred to as a chapter. The term chapter is sometimes avoided, as the suras are of unequal length; the shortest sura has only three ayat while the longest contains 286 ayat...
Al-Baqara
Al-Baqara
Sura al-Baqarah is the second and longest chapter of the Qur'an. It is a Medinan sura and comprises 286 verses, including the single longest verse in the Qur'an...
:183 (2:183):
Then he issued a fatwa that not observing Ramadan is a sin and whoever doesn't observe the fasting has knowingly rejected his well-known religious duty forcibly and added that fasting does not reduce productivity.