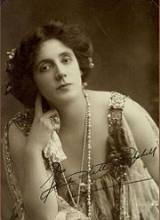 Overview
Mrs Patrick Campbell (9 February 1865 – 9 April 1940) was a British stage actress.
Campbell was born Beatrice Stella Tanner in Kensington
Kensington
Kensington is a district of west and central London, England within the Royal Borough of Kensington and Chelsea. An affluent and densely-populated area, its commercial heart is Kensington High Street, and it contains the well-known museum district of South Kensington.To the north, Kensington is...
, London
London
London is the capital city of :England and the :United Kingdom, the largest metropolitan area in the United Kingdom, and the largest urban zone in the European Union by most measures. Located on the River Thames, London has been a major settlement for two millennia, its history going back to its...
, to John Tanner and Maria Luigia Giovanna, daughter of Count Angelo Romanini. She studied for a short time at the Guildhall School of Music.

Her first marriage, from which she took the name by which she is generally known, produced two children, Alan Urquhart ('Beo') and Stella, and ended with the death of her first husband in the Boer War
Second Boer War
The Second Boer War was fought from 11 October 1899 until 31 May 1902 between the British Empire and the Afrikaans-speaking Dutch settlers of two independent Boer republics, the South African Republic and the Orange Free State...
in 1900.

Fourteen years later, Campbell became the second wife of George Cornwallis-West
George Cornwallis-West
George Frederick Myddleton Cornwallis-West was a British officer of the Scots Guards. He was the only son of Col. William Cornwallis-West and his wife Mary, née FitzPatrick . The family moved in aristocratic circles but did not have a great deal of wealth...
, a dashing writer and soldier
Soldier
A soldier is a member of the land component of national armed forces; whereas a soldier hired for service in a foreign army would be termed a mercenary...
previously married to Jennie Jerome, the mother of Sir Winston Churchill
Winston Churchill
Sir Winston Leonard Spencer-Churchill, was a predominantly Conservative British politician and statesman known for his leadership of the United Kingdom during the Second World War. He is widely regarded as one of the greatest wartime leaders of the century and served as Prime Minister twice...
.
Already well-known as an amateur, Campbell made her professional stage debut in 1888 at the Alexandra Theatre
Alexandra Theatre
The New Alexandra Theatre, commonly known as The Alex, is a theatre on Station Street in Birmingham, England.Construction of the theatre commenced in 1900 and was completed in 1901. The architects were Owen & Ward. The theatre was opened on 27 May 1901 as the Lyceum Theatre on John Bright Street;...
, Liverpool
Liverpool
Liverpool is a city and metropolitan borough of Merseyside, England, along the eastern side of the Mersey Estuary. It was founded as a borough in 1207 and was granted city status in 1880...
, four years after her marriage to Patrick Campbell.

Oh dear me — it's too late to do anything but accept you and love you — but when you were quite a little boy, somebody ought to have said "hush" just once!

Letter to George Bernard Shaw (1 November 1912) published in Bernard Shaw and Mrs. Patrick Campbell (1952), p. 52; this was later used in the play Dear Liar : A Biography in Two Acts (1960) by Jerome Kilty, an adaptation of the correspondence between Shaw and Campbell.

The deep, deep peace of the double-bed after the hurly-burly of the chaise-lounge.

She has such pretty little eyes — And they're so close together!

Comment about actress Norma Shearer|Norma Shearer, quoted in They Had Faces Then: Super Stars, Stars, and Starlets Of The 1930's (1974) by John Shipman Springer and, Jack D. Hamilton, p. 54
More
x