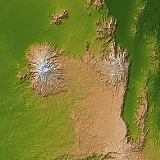 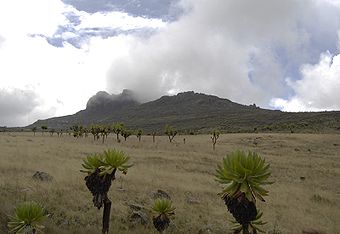 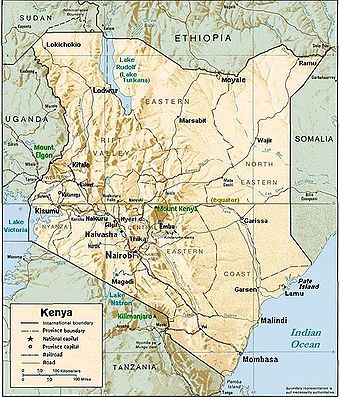 Mount Elgon is an extinct shield volcano
Shield volcano
A shield volcano is a type of volcano usually built almost entirely of fluid lava flows. They are named for their large size and low profile, resembling a warrior's shield. This is caused by the highly fluid lava they erupt, which travels farther than lava erupted from more explosive volcanoes...
on the border of Uganda
Uganda
Uganda , officially the Republic of Uganda, is a landlocked country in East Africa. Uganda is also known as the "Pearl of Africa". It is bordered on the east by Kenya, on the north by South Sudan, on the west by the Democratic Republic of the Congo, on the southwest by Rwanda, and on the south by...
and Kenya
Kenya
Kenya , officially known as the Republic of Kenya, is a country in East Africa that lies on the equator, with the Indian Ocean to its south-east...
, north of Kisumu
Kisumu
Kisumu is a port city in western Kenya at , with a population of 355,024 . It is the third largest city in Kenya, the principal city of western Kenya, the immediate former capital of Nyanza Province and the headquarters of Kisumu County. It has a municipal charter but no city charter...
and west of Kitale
Kitale
Kitale is an agricultural town in western Kenya situated between Mount Elgon and the Cherengani Hills at an elevation of around . Its urban population was estimated at 220,000 in 2007....
.

It is the oldest and largest solitary volcano in East Africa, covering an area of around 3500 km².

Other features of note are:

The mountain soils are red laterite
Laterite
Laterites are soil types rich in iron and aluminium, formed in hot and wet tropical areas. Nearly all laterites are rusty-red because of iron oxides. They develop by intensive and long-lasting weathering of the underlying parent rock...
. The mountain is the catchment area for the several rivers such as the Suam River which becomes the Turkwel downstream and which drains into Lake Turkana, the Nzoia River
Nzoia River
The Nzoia River is a 160-mile long Kenyan river, rising from Mount Elgon. It flows south and then west, eventually flowing into Lake Victoria near the town of Port Victoria....
and the Lwakhakha which flow to Lake Victoria
Lake Victoria
Lake Victoria is one of the African Great Lakes. The lake was named for Queen Victoria of the United Kingdom, by John Hanning Speke, the first European to discover this lake....
. The town of Kitale
Kitale
Kitale is an agricultural town in western Kenya situated between Mount Elgon and the Cherengani Hills at an elevation of around . Its urban population was estimated at 220,000 in 2007....
is in the foothills of the mountain. The area around the mountain is protected by two Mount Elgon National Park
Mount Elgon National Park
Mount Elgon National Park is a national park 140 km North East of Lake Victoria. The park covers an area of 1279 km² and is bisected by the border of Kenya and Uganda. The Ugandan part of the park covers 1110 km² while the Kenyan part covers 169 km²...
s one on each side of the international border.

In 1896, C. W. Hobley
Charles William Hobley
Charles William Hobley, CMG — known as C. W. Hobley — was a pioneering British Colonial administrator in Kenya...
became the first European to circumnavigate the mountain. Kmunke and Stigler made the first recorded ascent of Wagagai and Koitobos in 1911. F. Jackson, E. Gedge, and J. Martin made the first recorded ascent of Sudek in 1890. The main peak is an easy scramble and does not require any special mountaineering
Mountaineering
Mountaineering or mountain climbing is the sport, hobby or profession of hiking, skiing, and climbing mountains. While mountaineering began as attempts to reach the highest point of unclimbed mountains it has branched into specialisations that address different aspects of the mountain and consists...
skills.

The mountain is named after the Elgeyo
Elgeyo
The Elgeyo are an ethnic group that is part the larger Kalenjin ethnic group of nilotic origin. They live near Eldoret, Kenya in the highlands of the Keiyo District...
tribe, who once lived in huge caves on the south side of the mountain.

It was known as "Ol Doinyo Ilgoon" (Breast Mountain) by the Maasai and as "Masaba" on the Ugandan side.

Mount Elgon is a massive solitary volcanic mountain on the border of eastern Uganda and western Kenya. Its vast form, eighty kilometers in diameter, rises 3070m above the surrounding plains, providing welcome relief in more than one sense of the word. Its mountainous terrain introduces variety to an otherwise monotonous regional landscape. Its cool heights offer respite for humans from the hot plains below and its higher altitudes provide a refuge for flora and fauna.

Mount Elgon is home to three tribes, the Bagisu
Bagisu
The Gisu people, or Bagisu , alternately Gishu, Masaba, or Sokwia, are a tribe of the Masaba nation of eastern Uganda, closely related to the Bukusu people of Kenya...
, the Sabiny
Sebei
Sebei is an ethnic group of Uganda and Sudan. They speak Sebei, a Nilotic language. Many members of this ethnic group live in Kapchorwa District of Uganda....
and the Ogiek, better known in the region under the derogatory umbrella term Ndorobo
Dorobo
Dorobo is a derogatory umbrella term for several unrelated hunter-gatherer groups of Kenya and Tanzania....
. The Bagisu and Sabiny are subsistence farmers and conduct circumcision ceremonies every other year to initiate young men (and in the Sabiny's case, girls) into adulthood. Traditionally, the Bagisu, also known as the BaMasaba, consider Mount Elgon to be the embodiment of their founding father Masaba, and you may hear the mountain called by this name. Local people have long depended on forest produce and have made agreements with the park to continue to harvest resources such as bamboo poles and bamboo shoots (a local delicacy). The Ogiek used to be hunters and honey gatherers, but have become more sedentary in recent decades, and have partially been moved downward by the government.