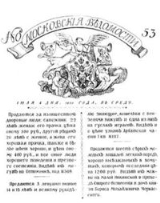 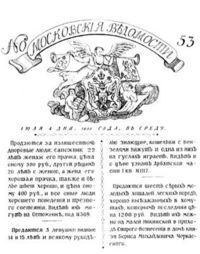 Moskovskiye Vedomosti was Russia
Russia
Russia or , officially known as both Russia and the Russian Federation , is a country in northern Eurasia. It is a federal semi-presidential republic, comprising 83 federal subjects...
's largest newspaper
Newspaper
A newspaper is a scheduled publication containing news of current events, informative articles, diverse features and advertising. It usually is printed on relatively inexpensive, low-grade paper such as newsprint. By 2007, there were 6580 daily newspapers in the world selling 395 million copies a...
by circulation before it was overtaken by Saint Petersburg
Saint Petersburg
Saint Petersburg is a city and a federal subject of Russia located on the Neva River at the head of the Gulf of Finland on the Baltic Sea...
dailies in the mid-19th century.

In 1779, the press was leased to the first Russian journalist, Nikolay Novikov
Nikolay Novikov
Nikolay Ivanovich Novikov was a Russian writer and philanthropist most representative of his country's Enlightenment. Frequently considered to be the first Russian journalist, he aimed at advancing the cultural and educational level of the Russian public....
, who reformed the weekly thoroughly, introduced supplements on literature and art, and raised its circulation to 4,000. Novikov edited the Moscow News until 1789, but his immediate successors continued along the same lines.

The newspaper was published once a week until 1812, twice a week until 1842, thrice a week until 1859 and daily since then. Mikhail Katkov
Mikhail Katkov
Mikhail Nikiforovich Katkov was a conservative Russian journalist influential during the reign of Alexander III.Katkov was born of a Russian government official and a Georgian noblewoman...
, who was the paper's editor in 1850-55 and 1863-87, made the daily reflect his increasingly conservative views. Under his guidance, the influence of the Moscow News rose to new heights and the circulation reached 12,000.

The daily gradually acquired a semi-official character, although nominally owned by the university until 1909, when it was taken over by the Black Hundred
Black Hundred
The Black Hundreds , also known as the black-hundredists was an ultra-nationalist movement in Russia in the early 20th century. They were a supporter of the House of Romanov and opposed any retreat from the autocracy of the reigning monarch...
circles. The newspaper was closed by the Bolsheviks on 9 November 1917, two days after the October Revolution
October Revolution
The October Revolution , also known as the Great October Socialist Revolution , Red October, the October Uprising or the Bolshevik Revolution, was a political revolution and a part of the Russian Revolution of 1917...
.
The source of this article is wikipedia, the free encyclopedia.  The text of this article is licensed under the GFDL.