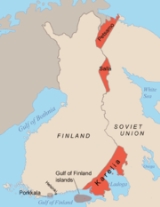 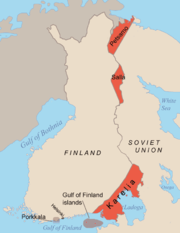 The Moscow Armistice was signed between Finland
Finland
Finland , officially the Republic of Finland, is a Nordic country situated in the Fennoscandian region of Northern Europe. It is bordered by Sweden in the west, Norway in the north and Russia in the east, while Estonia lies to its south across the Gulf of Finland.Around 5.4 million people reside...
on one side and the Soviet Union
Soviet Union
The Soviet Union , officially the Union of Soviet Socialist Republics , was a constitutionally socialist state that existed in Eurasia between 1922 and 1991....
and United Kingdom
United Kingdom
The United Kingdom of Great Britain and Northern IrelandIn the United Kingdom and Dependencies, other languages have been officially recognised as legitimate autochthonous languages under the European Charter for Regional or Minority Languages...
on the other side on September 19, 1944, ending the Continuation War
Continuation War
The Continuation War was the second of two wars fought between Finland and the Soviet Union during World War II.At the time of the war, the Finnish side used the name to make clear its perceived relationship to the preceding Winter War...
. The Armistice restored the Moscow Peace Treaty of 1940, with a number of modifications.

The final peace treaty
Paris Peace Treaties, 1947
The Paris Peace Conference resulted in the Paris Peace Treaties signed on February 10, 1947. The victorious wartime Allied powers negotiated the details of treaties with Italy, Romania, Hungary, Bulgaria, and Finland .The...
between Finland and many of the Allies
Allies of World War II
The Allies of World War II were the countries that opposed the Axis powers during the Second World War . Former Axis states contributing to the Allied victory are not considered Allied states...
was signed in Paris
Paris
Paris is the capital and largest city in France, situated on the river Seine, in northern France, at the heart of the Île-de-France region...
in 1947.

The conditions for peace were similar to what had been agreed in the Moscow Peace Treaty of 1940: Finland was obliged to cede parts of Karelia
Karelia
Karelia , the land of the Karelian peoples, is an area in Northern Europe of historical significance for Finland, Russia, and Sweden...
and Salla
Salla
Salla is a municipality of Finland, located in Lapland. The municipality has a population of and covers an area of ofwhich is water. The population density is....
, as well as certain islands in the Gulf of Finland
Gulf of Finland
The Gulf of Finland is the easternmost arm of the Baltic Sea. It extends between Finland and Estonia all the way to Saint Petersburg in Russia, where the river Neva drains into it. Other major cities around the gulf include Helsinki and Tallinn...
. The new armistice also handed all of Petsamo
Pechengsky District
Pechengsky District is an administrative and municipal district , one of the five in Murmansk Oblast, Russia. It is located to the northwest of the Kola Peninsula on the coast of the Barents Sea and borders with Finland in the south and southwest and with Norway in the west, northwest, and north...
to the Soviet Union, and Finland was further compelled to lease Porkkala
Porkkala
Porkkala is a peninsula in the Gulf of Finland located at Kirkkonummi in Southern Finland.The peninsula had great strategic value, as coastal artillery based there would be able to reach more than halfway across the Gulf of Finland...
to the Soviet Union for a period of fifty years (the area was returned to Finnish control in 1956).

Harsher conditions included Finnish payment of $300,000,000 in the form of various commodities over six years to the Soviet Union as war reparations
War reparations
War reparations are payments intended to cover damage or injury during a war. Generally, the term war reparations refers to money or goods changing hands, rather than such property transfers as the annexation of land.- History :...
. Finland also agreed to legalise the Communist Party of Finland
Communist Party of Finland
The Communist Party of Finland was a communist political party in Finland. The SKP was a section of Comintern and illegal in Finland until 1944.SKP did not participate in any elections with its own name. Instead, front organisations were used...
(after it had made some changes to the party rules) and ban the ones the Soviet Union considered fascist
Fascism
Fascism is a radical authoritarian nationalist political ideology. Fascists seek to rejuvenate their nation based on commitment to the national community as an organic entity, in which individuals are bound together in national identity by suprapersonal connections of ancestry, culture, and blood...
. Further, the individuals that the Soviets considered responsible for the war had to be arrested and put on trial
War-responsibility trials in Finland
The war-responsibility trials in Finland was a trial of the Finnish wartime leaders held responsible for "definitely influencing Finland in getting into a war with the Soviet Union and United Kingdom in 1941 or preventing peace" during the Continuation War, 1941-1944. Unlike other World War II...
, the most known case being the one of Risto Ryti
Risto Ryti
Risto Heikki Ryti was the fifth President of Finland, from 1940 to 1944. Ryti started his career as a politician in the field of economics and as a political background figure during the interwar period. He made a wide range of international contacts in the world of banking and within the...
. The armistice compelled Finland to drive German troops from its territory, leading to the Lapland War
Lapland War
The Lapland War were the hostilities between Finland and Nazi Germany between September 1944 and April 1945, fought in Finland's northernmost Lapland Province. While the Finns saw this as a separate conflict much like the Continuation War, German forces considered their actions to be part of the...
1944-1945.