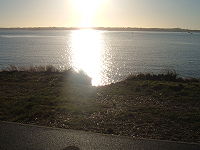 Afternoon is the time of day from noon to about 18:00.

The term should not be confused with "after noon" (two separate words), which is a translation of the Latin "post meridiem" (p.m.) as used in the 12-hour clock
12-hour clock
The 12-hour clock is a time conversion convention in which the 24 hours of the day are divided into two periods called ante meridiem and post meridiem...
, meaning a time of day from noon to midnight.

In Australia
Australia
Australia , officially the Commonwealth of Australia, is a country in the Southern Hemisphere comprising the mainland of the Australian continent, the island of Tasmania, and numerous smaller islands in the Indian and Pacific Oceans. It is the world's sixth-largest country by total area...
and New Zealand
New Zealand
New Zealand is an island country in the south-western Pacific Ocean comprising two main landmasses and numerous smaller islands. The country is situated some east of Australia across the Tasman Sea, and roughly south of the Pacific island nations of New Caledonia, Fiji, and Tonga...
, the word "arvo" is a slang term for afternoon.