Encyclopedia
Monica Enid Dickens, MBE
Order of the British Empire
The Most Excellent Order of the British Empire is an order of chivalry established on 4 June 1917 by George V of the United Kingdom. The Order comprises five classes in civil and military divisions...
(born 10 May 1915, London – died 25 December 1992, Reading, Berkshire
Reading, Berkshire
Reading is a large town and unitary authority area in England. It is located in the Thames Valley at the confluence of the River Thames and River Kennet, and on both the Great Western Main Line railway and the M4 motorway, some west of London....
) was an English writer, the great-granddaughter of Charles Dickens
Charles Dickens
Charles John Huffam Dickens was an English novelist, generally considered the greatest of the Victorian period. Dickens enjoyed a wider popularity and fame than had any previous author during his lifetime, and he remains popular, having been responsible for some of English literature's most iconic...
.

Known as "Monty" to her family
Dickens family
The Dickens family are the descendants of John Dickens, the father of the English novelist Charles Dickens. The descendants of Charles Dickens include the novelist Monica Dickens, the writer Lucinda Dickens Hawksley and the actors Harry Lloyd and Brian Forster....
and friends, she was born into an upper middle class London family to Henry Charles Dickens (1878–1966), a barrister, and Fanny (née Runge). She was the grand-daughter of Sir Henry Fielding Dickens
Henry Fielding Dickens
Sir Henry Fielding Dickens, KC was the eighth of ten children born to British author Charles Dickens and his wife Catherine. The most successful of all of Dickens's children, he was a barrister, a KC and Common Serjeant of London, a senior legal office which he held for over 15 years.-Early...
KC
Queen's Counsel
Queen's Counsel , known as King's Counsel during the reign of a male sovereign, are lawyers appointed by letters patent to be one of Her [or His] Majesty's Counsel learned in the law...
. Disillusioned with the world she was brought up in – she was expelled from St Paul's Girls' School
St Paul's Girls' School
St Paul's Girls' School is a senior independent school, located in Brook Green, Hammersmith, in West London, England.-History:In 1904 a new day school for girls was established by the trustees of the Dean Colet Foundation , which had run St Paul's School for boys since the sixteenth century...
in London before she was presented at court
Court
A court is a form of tribunal, often a governmental institution, with the authority to adjudicate legal disputes between parties and carry out the administration of justice in civil, criminal, and administrative matters in accordance with the rule of law...
as a debutante
Debutante
A débutante is a young lady from an aristocratic or upper class family who has reached the age of maturity, and as a new adult, is introduced to society at a formal "début" presentation. It should not be confused with a Debs...
– she decided to go into service despite coming from the privileged class; her experiences as a cook and general servant would form the nucleus of her first book, One Pair Of Hands in 1939.

One Pair Of Feet (1942) recounted her work as a nurse, and subsequently she worked in an aircraft factory and on a local newspaper in Hitchin
Hitchin
Hitchin is a town in Hertfordshire, England, with an estimated population of 30,360.-History:Hitchin is first noted as the central place of the Hicce people mentioned in a 7th century document, the Tribal Hidage. The tribal name is Brittonic rather than Old English and derives from *siccā, meaning...
– her experiences in the latter field of work inspired her 1951 book My Turn To Make The Tea.

Soon after this, she moved from her home in Hinxworth
Hinxworth
Hinxworth is a village and civil parish in North Hertfordshire, England. It sits just off the Great North Road between Baldock and Biggleswade...
in Hertfordshire to the United States after marrying a United States Navy
United States Navy
The United States Navy is the naval warfare service branch of the United States Armed Forces and one of the seven uniformed services of the United States. The U.S. Navy is the largest in the world; its battle fleet tonnage is greater than that of the next 13 largest navies combined. The U.S...
officer, Roy O. Stratton, who died in 1985. They adopted two daughters, Pamela and Prudence. The family lived in Washington, D.C. and Falmouth, Massachusetts
Falmouth, Massachusetts
Falmouth is a town in Barnstable County, Massachusetts, United States; Barnstable County is coextensive with Cape Cod. The population was 31,531 at the 2010 census....
and she continued to write, most of her books being set in Britain. She was also a regular columnist for the British women's magazine Woman's Own
Woman's Own
Woman's Own is a British lifestyle magazine aimed at women.Woman's Own was first published in 1932. It is one of the UK's most famous women's magazines and is published by IPC Media....
for twenty years.

Dickens had strong humanitarian interests which were manifested in her work with the National Society for the Prevention of Cruelty to Children (reflected in her 1953 book No More Meadows and her 1964 work Kate and Emma), the Royal Society for the Prevention of Cruelty to Animals
Royal Society for the Prevention of Cruelty to Animals
The Royal Society for the Prevention of Cruelty to Animals is a charity in England and Wales that promotes animal welfare. In 2009 the RSPCA investigated 141,280 cruelty complaints and collected and rescued 135,293 animals...
(coming to the fore in her 1963 book Cobbler's Dream), and the Samaritans
Samaritans (charity)
Samaritans is a registered charity aimed at providing emotional support to anyone in emotional distress or at risk of suicide throughout the United Kingdom and Ireland, often through their telephone helpline. The name comes from the Biblical parable of the Good Samaritan, though the organisation...
, the subject of her 1970 novel The Listeners – she helped to found the first American branch of the Samaritans in Massachusetts
Massachusetts
The Commonwealth of Massachusetts is a state in the New England region of the northeastern United States of America. It is bordered by Rhode Island and Connecticut to the south, New York to the west, and Vermont and New Hampshire to the north; at its east lies the Atlantic Ocean. As of the 2010...
in 1974. From 1970 onwards she wrote a number of children's books; the Follyfoot series of books followed on from her earlier adult novel Cobbler's Dream, and were the basis of a children's TV series, also called Follyfoot
Follyfoot
Follyfoot was a children's television series co-produced by the majority-partner British television company Yorkshire Television and the independent West German company TV Munich...
, produced by Yorkshire Television
Yorkshire Television
Yorkshire Television, now officially known as ITV Yorkshire and sometimes unofficially abbreviated to YTV, is a British television broadcaster and the contractor for the Yorkshire franchise area on the ITV network...
for the UK's ITV network between 1971 and 1973 (and popular around the world for many years thereafter).

In 1978, Monica Dickens published her autobiography, An Open Book. In 1985 she returned to the UK after the death of her husband, and continued to write until her death on Christmas Day 1992, aged 77, her final book being published posthumously. She was also an occasional broadcaster
Presenter
A presenter, or host , is a person or organization responsible for running an event. A museum or university, for example, may be the presenter or host of an exhibit. Likewise, a master of ceremonies is a person that hosts or presents a show...
for most of her writing career. 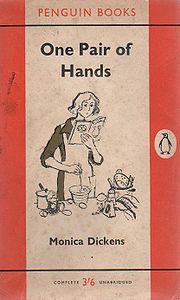 The book Cobbler's Dream also contains the same characters as in the Follyfoot series.

In late 1964 Dickens was visiting Australia to promote her works. It was reported in the Sydney Morning Herald on 30 November 1964 that during a book signing session in Sydney she had been approached by a woman who handed her a copy of her book and enquired, presumably in a broad Australian accent, "How much is it?". Dickens reportedly misheard this as an instruction as to the name which she should include in the inscription ("Emma Chisit") and thus was born the phenomenon of "Strine
Strine
Strine is a term coined in 1964 and subsequently used to describe a broad accent of Australian English. The term is a syncope, derived from a shortened phonetic rendition of the pronunciation of the word "Australian" in an exaggerated Broad Australian accent, drawing upon the tendency of this...
" which filled the newspaper's letter columns and subsequently was the subject of a separate weekly article and, later, a series of humorous books.