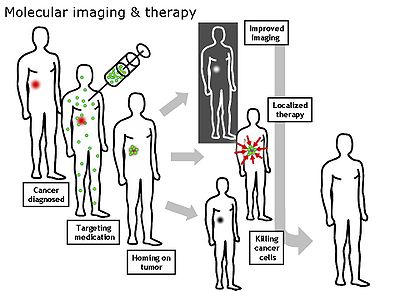 Molecular Imaging emerged in the early twenty-first century as a discipline at the intersection of molecular biology and in vivo imaging. It enables the visualisation of the cellular function and the follow-up of the molecular process in living organisms without perturbing them. The multiple and numerous potentialities of this field are applicable to the diagnosis of diseases such as cancer, and neurological and cardiovascular diseases. This technique also contributes to improving the treatment of these disorders by optimizing the pre-clinical and clinical tests of new medication. They are also expected to have a major economic impact due to earlier and more precise diagnosis.
Molecular and Functional Imaging has taken on a new direction since the description of the human genome. New paths in fundamental research, as well as in applied and industrial research, render the task of scientists more complex and increase the demands on them. Therefore, a tailor-made teaching program is in order.

Molecular imaging differs from traditional imaging in that probes known as biomarkers are used to help image particular targets or pathways. Biomarkers interact chemically with their surroundings and in turn alter the image according to molecular changes occurring within the area of interest. This process is markedly different from previous methods of imaging which primarily imaged differences in qualities such as density or water content. This ability to image fine molecular changes opens up an incredible number of exciting possibilities for medical application, including early detection and treatment of disease and basic pharmaceutical development. Furthermore, molecular imaging allows for quantitative tests, imparting a greater degree of objectivity to the study of these areas. One emerging technology is MALDI molecular imaging based on mass spectrometry
Mass spectrometry
Mass spectrometry is an analytical technique that measures the mass-to-charge ratio of charged particles.It is used for determining masses of particles, for determining the elemental composition of a sample or molecule, and for elucidating the chemical structures of molecules, such as peptides and...
.

Many areas of research are being conducted in the field of molecular imaging. Much research is currently centered around detecting what is known as a predisease state or molecular states that occur before typical symptoms of a disease are detected. Other important veins of research are the imaging of gene expression and the development of novel biomarkers. Organizations such as the SNM
Society of Nuclear Medicine
The Society of Nuclear Medicine, or SNM, based in Reston, Virginia, is a nonprofit organization founded in 1954. There are 17,000 members: physicians, pharmacists, physicists and scientists, except for a separate section of 10,000 technologists...
Center for Molecular Imaging Innovation and Translation (CMIIT) have formed to support research in this field. In Europe, other "networks of excellence" such as DiMI (Diagnostics in Molecular Imaging) or EMIL (European Molecular Imaging Laboratories) work on this new science, integrating activities and research in the field. In this way, a European Master Programme "EMMI" is being set up to train a new generation of professionals in molecular imaging.

Recently the term "Molecular Imaging" has been applied to a variety of microscopy and nanoscopy techniques including live-cell microscopy, Total Internal Reflection Fluorescence
Total internal reflection fluorescence microscope
A total internal reflection fluorescence microscope is a type of microscope with which a thin region of a specimen, usually less than 200 nm, can be observed.-Background:...
(TIRF)-microscopy, STimulated Emission Depletion (STED)-nanoscopy and Atomic Force Microscopy (AFM) as here images of molecules are the readout.

There are many different modalities that can be used for noninvasive molecular imaging. Each have their different strengths and weaknesses and some are more adept at imaging multiple targets than others.

MRI has the advantages of having very high spatial resolution and is very adept at morphological imaging and functional imaging. MRI does have several disadvantages though. First, MRI has a sensitivity of around 10−3 mol/L  to 10−5 mol/L which, compared to other types of imaging, can be very limiting. This problem stems from the fact that the difference between atoms in the high energy state and the low energy state is very small. For example, at 1.5 tesla
Tesla (unit)
The tesla is the SI derived unit of magnetic field B . One tesla is equal to one weber per square meter, and it was defined in 1960 in honour of the inventor, physicist, and electrical engineer Nikola Tesla...
, a typical field strength for clinical MRI, the difference between high and low energy states is approximately 9 molecules per 2 million. Improvements to increase MR sensitivity include hyperpolarization by increasing magnetic field strength, optical pumping, or dynamic nuclear polarization. There are also a variety of signal amplification schemes based on chemical exchange that increase sensitivity.

There are a number of approaches used for optical imaging. The various methods depend upon fluorescence
Fluorescence
Fluorescence is the emission of light by a substance that has absorbed light or other electromagnetic radiation of a different wavelength. It is a form of luminescence. In most cases, emitted light has a longer wavelength, and therefore lower energy, than the absorbed radiation...
, bioluminescence
Bioluminescence
Bioluminescence is the production and emission of light by a living organism. Its name is a hybrid word, originating from the Greek bios for "living" and the Latin lumen "light". Bioluminescence is a naturally occurring form of chemiluminescence where energy is released by a chemical reaction in...
, absorption
Absorption (electromagnetic radiation)
In physics, absorption of electromagnetic radiation is the way by which the energy of a photon is taken up by matter, typically the electrons of an atom. Thus, the electromagnetic energy is transformed to other forms of energy for example, to heat. The absorption of light during wave propagation is...
or reflectance as the source of contrast.

Optical imaging's most valuable attribute is that it and ultrasound
Ultrasound
Ultrasound is cyclic sound pressure with a frequency greater than the upper limit of human hearing. Ultrasound is thus not separated from "normal" sound based on differences in physical properties, only the fact that humans cannot hear it. Although this limit varies from person to person, it is...
do not have strong safety concerns like the other medical imaging modalities.

The downside of optical imaging is the lack of penetration depth, especially when working at visible wavelengths. Depth of penetration is related to the absorption and scattering of light, which is primarily a function of the wavelength of the excitation source. Light is absorbed by endogenous chromophores found in living tissue (e.g. hemoglobin, melanin, and lipids). In general, light absorption and scattering decreases with increasing wavelength. Below ~700 nm (e.g. visible wavelengths), these effects result in shallow penetration depths of only a few millimeters. Thus, in the visible region of the spectrum, only superficial assessment of tissue features is possible. Above 900 nm, water absorption can interfere with signal-to-background ratio. Because the absorption coefficient of tissue is considerably lower in the near infrared (NIR) region (700-900 nm), light can penetrate more deeply, to depths of several centimeters.

Fluorescent probes and labels are an important tool for optical imaging. A number of near-infrared (NIR) fluorophores have been employed for in vivo imaging, including Kodak X-SIGHT Dyes and Conjugates, Pz
Porphyrazine
Porphyrazines, or tetraazaporphyrins, are tetrapyrrole macrocycles similar to porphyrins and phthalocyanines. Pioneered by Sir R. Patrick Linstead as an extenstion of his work on phthalocyanines, porphyrazines differ from porphyrins in that they contain -meso nitrogen atoms, rather than carbon...
247, DyLight
DyLight Fluor
The DyLight Fluor family of fluorescent dyes are produced by Dyomics in collaboration with Thermo Fisher Scientific. DyLight dyes are typically used in biotechnology and research applications as biomolecule, cell and tissue labels for fluorescence microscopy, cell biology or molecular...
750 and 800 Fluors, Cy 5.5 and 7 Fluors, Alexa Fluor 680 and 750 Dyes, IRDye 680 and 800CW Fluors. Quantum dots, with their photostability and bright emissions, have generated a great deal of interest; however, their size precludes efficient clearance from the circulatory and renal systems while exhibiting long-term toxicity.


Several studies have demonstrated the use of infrared dye-labeled probes in optical imaging.


It is important to note that addition of an NIR probe to any vector can alter the vector's biocompatibility and biodistribution. Therefore, it can not be unequivocally assumed that the conjugated vector will behave similarly to the native form.

The main purpose of SPECT when used in brain imaging is to measure the regional cerebral blood flow (rCBF). The development of computed tomography in the 1970s allowed mapping of the distribution of the radioisotopes in the brain, and led to the technique now called SPECT.

The imaging agent used in SPECT emits gamma rays, as opposed to the positron emitters (such as 18F) used in PET. There are a range of radiotracers (such as 99mTc, 111In, 123I, 201Tl) that can be used, depending on the specific application.

Xenon
Xenon
Xenon is a chemical element with the symbol Xe and atomic number 54. The element name is pronounced or . A colorless, heavy, odorless noble gas, xenon occurs in the Earth's atmosphere in trace amounts...
(133Xe) gas is one such radiotracer. It has been shown to be valuable for diagnostic inhalation studies for the evaluation of pulmonary function; for imaging the lungs; and may also be used to assess rCBF. Detection of this gas occurs via a gamma camera
Gamma camera
A gamma camera, also called a scintillation camera or Anger camera, is a device used to image gamma radiation emitting radioisotopes, a technique known as scintigraphy...
—which is a scintillation detector consisting of a collimator, a NaI crystal, and a set of photomultiplier tubes.

By rotating the gamma camera around the head, a three dimensional image of the distribution of the radiotracer can be obtained by employing filtered back projection or other tomographic techniques.
The radioisotopes used in SPECT have relatively long half lives (a few hours to a few days) making them easy to produce and relatively cheap. This represents the major advantage of SPECT as a brain imaging technique, since it is significantly cheaper than either PET or fMRI. However it lacks good spatial (i.e., where exactly the particle is) or temporal (i.e., did the contrast agent signal happen at this millisecond, or that millisecond) resolution. Additionally, due to the radioactivity of the contrast agent, there are safety aspects concerning the administration of radioisotopes to the subject, especially for serial studies.

Positron emission tomography is a nuclear medicine
Nuclear medicine
In nuclear medicine procedures, elemental radionuclides are combined with other elements to form chemical compounds, or else combined with existing pharmaceutical compounds, to form radiopharmaceuticals. These radiopharmaceuticals, once administered to the patient, can localize to specific organs...
imaging technique which produces a three-dimensional image or picture of functional processes in the body. The theory behind PET is simple enough. First a molecule is tagged with a positron emitting isotope. These positrons annihilate with nearby electrons, emitting two 511,000 eV photons, directed 180 degrees apart in opposite directions. These photons are then detected by the scanner which can estimate the density of positron annihilations in a specific area. When enough interactions and annihilations have occurred, the density of the original molecule may be measured in that area. Typical isotopes include 11C, 13N, 15O, 18F, 64Cu, 62Cu, 124I, 76Br, 82Rb and 68Ga, with 18F being the most clinically utilized. One of the major disadvantages of PET is that most of the probes must be made with a cyclotron. Most of these probes also have a half life measured in hours, forcing the cyclotron to be on site. These factors can make PET prohibitively expensive. PET imaging does have many advantages though. First and foremost is its sensitivity: a typical PET scanner can detect between 10−11 mol/L to 10−12 mol/L concentrations.


Probes and the imaging of molecular interactions

In order to image multiple targets you must first identify and develop the interactions of which you are trying to take advantage. Developing good probes is often difficult and is an area of intense research.