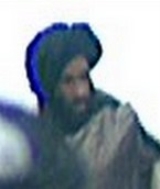 Overview
Mullah
Mullah
Mullah is generally used to refer to a Muslim man, educated in Islamic theology and sacred law. The title, given to some Islamic clergy, is derived from the Arabic word مَوْلَى mawlā , meaning "vicar", "master" and "guardian"...
Mohammed Omar , often simply called Mullah Omar, is the leader
Leader
A leader is one who influences or leads others.Leader may also refer to:- Newspapers :* Leading article, a piece of writing intended to promote an opinion, also called an editorial* The Leader , published 1909–1967...
of the Taliban movement that operates in Afghanistan
Afghanistan
Afghanistan , officially the Islamic Republic of Afghanistan, is a landlocked country located in the centre of Asia, forming South Asia, Central Asia and the Middle East. With a population of about 29 million, it has an area of , making it the 42nd most populous and 41st largest nation in the world...
. He was Afghanistan's de facto
De facto
De facto is a Latin expression that means "concerning fact." In law, it often means "in practice but not necessarily ordained by law" or "in practice or actuality, but not officially established." It is commonly used in contrast to de jure when referring to matters of law, governance, or...
head of state
Head of State
A head of state is the individual that serves as the chief public representative of a monarchy, republic, federation, commonwealth or other kind of state. His or her role generally includes legitimizing the state and exercising the political powers, functions, and duties granted to the head of...
from 1996 to late 2001, under the official title "Head of the Supreme Council". He held the title Commander of the Faithful of the Islamic Emirate of Afghanistan
Islamic Emirate of Afghanistan
The Islamic Emirate of Afghanistan was founded in 1996 when the Taliban began their rule of Afghanistan and ended with their fall from power in 2001...
, which was officially recognized by Pakistan
Pakistan
Pakistan , officially the Islamic Republic of Pakistan is a sovereign state in South Asia. It has a coastline along the Arabian Sea and the Gulf of Oman in the south and is bordered by Afghanistan and Iran in the west, India in the east and China in the far northeast. In the north, Tajikistan...
, Saudi Arabia
Saudi Arabia
The Kingdom of Saudi Arabia , commonly known in British English as Saudi Arabia and in Arabic as as-Sa‘ūdiyyah , is the largest state in Western Asia by land area, constituting the bulk of the Arabian Peninsula, and the second-largest in the Arab World...
and the United Arab Emirates
United Arab Emirates
The United Arab Emirates, abbreviated as the UAE, or shortened to "the Emirates", is a state situated in the southeast of the Arabian Peninsula in Western Asia on the Persian Gulf, bordering Oman, and Saudi Arabia, and sharing sea borders with Iraq, Kuwait, Bahrain, Qatar, and Iran.The UAE is a...
.

Mullah Omar has been wanted by the US State Department's Rewards for Justice program since October 2001, for sheltering Osama bin Laden
Osama bin Laden
Osama bin Mohammed bin Awad bin Laden was the founder of the militant Islamist organization Al-Qaeda, the jihadist organization responsible for the September 11 attacks on the United States and numerous other mass-casualty attacks against civilian and military targets...
and al-Qaeda
Al-Qaeda
Al-Qaeda is a global broad-based militant Islamist terrorist organization founded by Osama bin Laden sometime between August 1988 and late 1989. It operates as a network comprising both a multinational, stateless army and a radical Sunni Muslim movement calling for global Jihad...
militants in the years prior to the 11 September attacks.