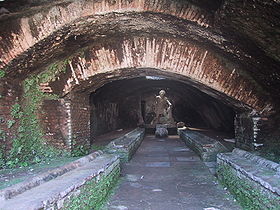 A Mithraeum is a place of worship for the followers of the mystery religion
Greco-Roman mysteries
Mystery religions, sacred Mysteries or simply mysteries, were religious cults of the Greco-Roman world, participation in which was reserved to initiates....
of Mithraism.

The Mithraeum was either an adapted natural cave or cavern or an artificial building imitating a cavern. Mithraea were dark and windowless, even if they were not actually in a subterranean space or in a natural cave. When possible, the mithraeum was constructed within or below an existing building. The site of a mithraeum may also be identified by its separate entrance or vestibule, its "cave", called the spelaeum or spelunca, with raised benches along the side walls for the ritual meal, and its sanctuary at the far end, often in a recess, before which the pedestal-like altar stood. Many mithraea that follow this basic plan are scattered over much of the

Roman Empire's
Roman Empire
The Roman Empire was the post-Republican period of the ancient Roman civilization, characterised by an autocratic form of government and large territorial holdings in Europe and around the Mediterranean....
former area, particularly where the legions were stationed along the frontiers (such as Britain). Others may be recognized by their characteristic layout, even though converted as crypts beneath Christian churches.

From the structure of the mithraea it is possible to surmise that worshippers would have gathered for a common meal along the reclining couches lining the walls. Most temples could hold only thirty or forty individuals.

The mithraeum itself was arranged as an "image of the universe". It is noticed by some researchers that this movement, especially in the context of mithraic iconography (see below), seems to stem from the neoplatonic concept that the "running" of the sun from solstice to solstice is a parallel for the movement of the soul through the universe, from pre-existence, into the body, and then beyond the physical body into an afterlife.