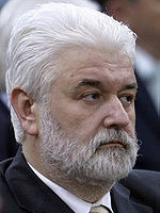 Encyclopedia
Mirko Cvetković is a Serbia
Serbia
Serbia , officially the Republic of Serbia , is a landlocked country located at the crossroads of Central and Southeast Europe, covering the southern part of the Carpathian basin and the central part of the Balkans...
n economist
Economist
An economist is a professional in the social science discipline of economics. The individual may also study, develop, and apply theories and concepts from economics and write about economic policy...
and the Prime Minister of Serbia as well as the Minister of Finance.

Mirko Cvetković was born in the small city of Zaječar
Zajecar
Zaječar is a city and municipality in the eastern part of Serbia. According to the 2011 census the town has a population of 36,830, and its coordinates are 43.91° North, 22.30° East...
in eastern Serbia. His father Srboljub was economist, mother Stana worked as a pharmacist
Pharmacist
Pharmacists are allied health professionals who practice in pharmacy, the field of health sciences focusing on safe and effective medication use...
. His grandfather, Mirko, a school teacher
Teacher
A teacher or schoolteacher is a person who provides education for pupils and students . The role of teacher is often formal and ongoing, carried out at a school or other place of formal education. In many countries, a person who wishes to become a teacher must first obtain specified professional...
, was killed in 1941, by German soldiers
Wehrmacht
The Wehrmacht – from , to defend and , the might/power) were the unified armed forces of Nazi Germany from 1935 to 1945. It consisted of the Heer , the Kriegsmarine and the Luftwaffe .-Origin and use of the term:...
during the Kragujevac massacre
Kragujevac massacre
The Kragujevac massacre was the murder of men and boys in Kragujevac, Serbia, by Nazi German soldiers between 20–21 October 1941. All males from the town between the ages of sixteen and sixty were assembled, including high school students, and the victims were selected from amongst them...
.

Cvetković worked at the Mining Institute for ten years and later at the Economics Institute for another six years, followed by seven years at the advisory and research firm CES Mecon where he worked as a consultant.

In the 1980s he was external consultant for the World Bank
World Bank
The World Bank is an international financial institution that provides loans to developing countries for capital programmes.The World Bank's official goal is the reduction of poverty...
on a number of projects in Pakistan
Pakistan
Pakistan , officially the Islamic Republic of Pakistan is a sovereign state in South Asia. It has a coastline along the Arabian Sea and the Gulf of Oman in the south and is bordered by Afghanistan and Iran in the west, India in the east and China in the far northeast. In the north, Tajikistan...
, India
India
India , officially the Republic of India , is a country in South Asia. It is the seventh-largest country by geographical area, the second-most populous country with over 1.2 billion people, and the most populous democracy in the world...
and Turkey
Turkey
Turkey , known officially as the Republic of Turkey , is a Eurasian country located in Western Asia and in East Thrace in Southeastern Europe...
and worked on the United Nations Development Programme
United Nations Development Programme
The United Nations Development Programme is the United Nations' global development network. It advocates for change and connects countries to knowledge, experience and resources to help people build a better life. UNDP operates in 177 countries, working with nations on their own solutions to...
(UNDP) in Somalia
Somalia
Somalia , officially the Somali Republic and formerly known as the Somali Democratic Republic under Socialist rule, is a country located in the Horn of Africa. Since the outbreak of the Somali Civil War in 1991 there has been no central government control over most of the country's territory...
.

In the period 1998–2001 he was employed as adviser for economic issues at the Mining Institute, and in 2005 he became the Special Advisor at CEO Intercom Consulting.

Cvetković is married and has two children. Apart from his native tongue
Serbian language
Serbian is a form of Serbo-Croatian, a South Slavic language, spoken by Serbs in Serbia, Bosnia and Herzegovina, Montenegro, Croatia and neighbouring countries....
, he speaks English
English language
English is a West Germanic language that arose in the Anglo-Saxon kingdoms of England and spread into what was to become south-east Scotland under the influence of the Anglian medieval kingdom of Northumbria...
fluently and, as a hobby, plays piano, saxophone and clarinet.

After the overthrow
5th October Overthrow
A series of events occurred in 2000 in the Federal Republic of Yugoslavia, following the presidential elections and culminating in the downfall of Slobodan Milošević's regime on 5 October 2000...
of Slobodan Milošević
Slobodan Milošević
Slobodan Milošević was President of Serbia and Yugoslavia. He served as the President of Socialist Republic of Serbia and Republic of Serbia from 1989 until 1997 in three terms and as President of the Federal Republic of Yugoslavia from 1997 to 2000...
, from January 2001 Cvetković worked as Deputy Minister of Economy and Privatisation in the Government of Serbia
Government of Serbia (2001-2004)
In the first post-Milošević Serbian parliamentary elections held on December 20, 2000, the Democratic Opposition of Serbia coalition won 64.7% of the popular vote translating into 176 seats in the Serbian National Assembly ....
of Zoran Djindjić. From 2003 to 2004 he was the Director of the Privatisation Agency. After the fall of Zoran Živković
Zoran Živkovic (politician)
Zoran Živković is a former Prime Minister of Serbia who replaced assassinated Prime Minister Zoran Đinđić in March 2003. He was born on December 22, 1960 in Niš where he finished high-school Bora Stanković. Živković received a community college diploma in Economics in Belgrade and worked as...
's government on 2003 elections
Serbian parliamentary election, 2003
Parliamentary elections were held in the Republic of Serbia on December 28, 2003. The Republic of Serbia then was one of the two federal units of Serbia and Montenegro, formerly known as the Federal Republic of Yugoslavia....
, Cvetković withdrew from politics.

He was best remembered as being the first to doubt the way money from the central budget was spent in Kosovo. Back then, he told his colleagues in the government: “You can raise the salaries of employees in Kosovo if you give up a part of your salary”.

On June 27, 2008 President Boris Tadić
Boris Tadic
Boris Tadić is the President of Serbia and leader of the Democratic Party. He was elected to a five-year term on 27 June 2004, and was sworn into office on 11 July. He was re-elected for a de facto second five-year term on 3 February 2008 and was sworn in on 15 February...
named Mirko Cvetković as the new Prime Minister following the parliamentary elections
Serbian parliamentary election, 2008
A pre-term parliamentary election was held in the Serbia on 11 May 2008, barely a year after the previous parliamentary election. There were 6,749,886 eligible electors who were able to vote in 8,682 voting places, as well as 157 special voting places designed for refugees from...
that were held in May. Other possible candidates were the current Foreign Minister Vuk Jeremić
Vuk Jeremic
Vuk Jeremić is a Serbian politician and the current Minister of Foreign Affairs in the Government of Serbia. He was sworn in on May 15, 2007 and reelected on July 7, 2008.-Education:Jeremić was born in Belgrade in 1975 to Miško Jeremić and Sena Buljubašić...
and the current President of the Executive Council of Vojvodina Bojan Pajtić
Bojan Pajtic
Bojan Pajtić is the current President of the Government of Vojvodina.He is a member of the Democratic Party. Pajtić was born in Senta and holds an advanced degree in Law from the University of Novi Sad. He speaks Serbian, Hungarian, and English language. Since November 2004, he has been Chairman...
.

Mirko Cvetković is the first prime minister of Serbia since the introduction of the multiparty system who had not previously been in a high position in one of the ruling parties.

He was officially sworn in on July 7 after taking the oath of office in the National Assembly
National Assembly of Serbia
The National Assembly of Serbia is the unicameral parliament of Serbia. It is composed of 250 proportionally elected deputies elected in general elections by secret ballot, on 4 years term. The National Assembly elects the President of the National Assembly who presides over the sessions...
. In his exposé keynote address Cvetković said that one of the first moves of the new Government will be to submit the Stabilization and Association Agreement with the European Union
European Union
The European Union is an economic and political union of 27 independent member states which are located primarily in Europe. The EU traces its origins from the European Coal and Steel Community and the European Economic Community , formed by six countries in 1958...
to the parliament for ratification and that it will not accept Kosovo
Kosovo
Kosovo is a region in southeastern Europe. Part of the Ottoman Empire for more than five centuries, later the Autonomous Province of Kosovo and Metohija within Serbia...
's unilaterally declared independence.

He also stated that the government will strengthen the economy and social responsibility and lead a decisive battle against crime and corruption, and in favor of international justice. He also said that one of the first lawmaking initiatives will be the ratification of the energy arrangement with the Russian Federation.

Cvetković is seen by many as an expert in the economy, a man of compromise, respected by the Democratic Party but by other political parties as well. Western news agencies describe him as a "Democrat" (indicating support for the pro-Western Democratic Party
Democratic Party (Serbia)
The Democratic Party is a political party in Serbia. It is described as a social liberal or social democratic party.-Pre-war history:The Democratic Party was established on 16 February 1919 from unification of Sarajevo parties independent radicals, progressives, liberals and the Serbian part of...
) and a "low profile technocrat" likely to prefer improving Serbia's economy rather than concentrating on difficult political issues.

His political policies combined authority
Authority
The word Authority is derived mainly from the Latin word auctoritas, meaning invention, advice, opinion, influence, or command. In English, the word 'authority' can be used to mean power given by the state or by academic knowledge of an area .-Authority in Philosophy:In...
and moderate economic liberalism
Economic liberalism
Economic liberalism is the ideological belief in giving all people economic freedom, and as such granting people with more basis to control their own lives and make their own mistakes. It is an economic philosophy that supports and promotes individual liberty and choice in economic matters and...
— that is, the support of laissez-faire
Laissez-faire
In economics, laissez-faire describes an environment in which transactions between private parties are free from state intervention, including restrictive regulations, taxes, tariffs and enforced monopolies....
economic policies.

Cabinet of Mirko Cvetković is the longest-serving since the fall of Slobodan Milosevic in 2000.

“That night when we finally reached an agreement, I told the ministers: Gentlemen, this is your budget, I will be ready to accept resignations at 10 a.m.” he said of the 2009 budget much to the dissatisfaction of some ministers”.

“I wish everyone personal happiness and health in the next year, and, as our people say – the money will come by itself”, told the public at New Year”.

“There is no salvation, but we will survive”, he quoted Serbian Prime Minister Nikola Pašić
Nikola Pašic
Nikola P. Pašić was a Serbian and Yugoslav politician and diplomat, the most important Serbian political figure for almost 40 years, leader of the People's Radical Party who, among other posts, was twice a mayor of Belgrade...
from history”.