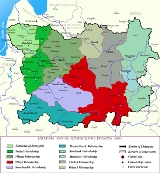 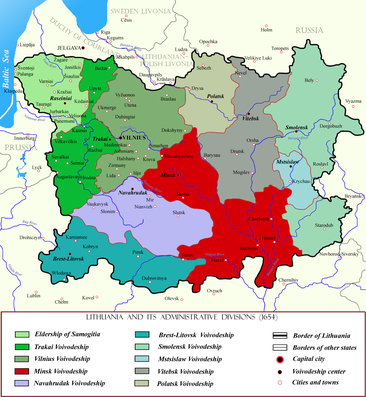 The voivodeship was stretched along the Berezina and Dneper rivers, with the earlier river having both its source and its estuary within the limits of the voivodeship, as well as most of its basin. To the north east it bordered Polotsk, Vitebsk
Witebsk Voivodeship
Vitebsk Voivodeship was a unit of administrative division and local government in the Grand Duchy of Lithuania since 15th century till the partitions of Poland in 1795.Voivodeship Governor seat:...
and Mscislaw voivodeships. To the east it bordered with the lands of Chernigov
Czernihów Voivodeship
Chernihiv Voivodeship was a unit of administrative division and local government in the Kingdom of Poland from 1635 until Khmelnytsky Uprising in 1648...
(on both sides of the Dneper and Sozh
Sozh
Sozh is an international river flowing in Belarus, Russia and Ukraine. It is a left bank tributary of the Dnieper River. Sozh passes through Gomel, the second largest city in Belarus....
rivers), while to the south-east it was delimited by the river Snov. Further southwards the voivodeship was bordering the land of Kiev. Across the basin of the Pripyat
Pripyat River
The Pripyat River or Prypiat River is a river in Eastern Europe, approximately long. It flows east through Ukraine, Belarus, and Ukraine again, draining into the Dnieper....
river the land of Minsk was bordering the Brześć Voivodeship (across Ubort river) and Nowogródek Voivodeship (across Ptsich river). Further northwards it was bordering the capital of the Grand Duchy, the Vilnius Voivodeship
Vilnius Voivodeship
The Vilnius Voivodeship was one of voivodeships in the Grand Duchy of Lithuania, created in 1413, from the Duchy of Lithuania and neighbouring lands.- Geography and administrative division :...
.

Minsk had been a capital of a semi-independent duchy at least since 1067. Raided on a yearly basis by Lithuanian tribes, by 12th century it was made a fief and in 14th century it was directly incorporated into the Grand Duchy. It was king Władysław II of Poland
Jogaila
Jogaila, later 'He is known under a number of names: ; ; . See also: Jogaila : names and titles. was Grand Duke of Lithuania , king consort of Kingdom of Poland , and sole King of Poland . He ruled in Lithuania from 1377, at first with his uncle Kęstutis...
to create the voivodeship in 1413. However, it was not until 1500 that its borders were delimited. Around that time the Minsk voivodeship had been divided onto three powiat
Powiat
A powiat is the second-level unit of local government and administration in Poland, equivalent to a county, district or prefecture in other countries. The term powiat is most often translated into English as "county", although other terms are also sometimes used...
s, with capital cities in Minsk, Mozyr and Rechytsa
Rechytsa
Rechytsa is a town in the Homiel Province of Belarus. It is center of Rechytsa Raion. The city is situated at the mouth of Rechitsa river, flowing into Dnieper. The population is 65,532 as of 2005.-History:...
. The latter was further divided onto the land of Rechytsa and land of Rahachow
Rahachow
Rahachow - also transliteratedRahačoŭ .The notable Rabbi, Yosef Rosen , known as the Rogatchover Gaon , was born and raised here. The artist Anatoli Lvovich Kaplan was born and brought up here, as was former NHL hockey player Sergei Bautin.- External links :*...
. In the meantime, in 1441 the city of Minsk was granted with a city charter, by the king Casimir IV Jagiellon
Casimir IV Jagiellon
Casimir IV KG of the House of Jagiellon was Grand Duke of Lithuania from 1440, and King of Poland from 1447, until his death.Casimir was the second son of King Władysław II Jagiełło , and the younger brother of Władysław III of Varna....
. His son, Alexander Jagiellon
Alexander Jagiellon
Alexander of the House of Jagiellon was the Grand Duke of Lithuania and later also King of Poland. He was the fourth son of Casimir IV Jagiellon...
extended the privilege in 1496 and granted the town with Magdeburg Laws. Since then, the entire region shared the fate of its capital city
History of Minsk
Early East Slavs settled the forested hills of today's Minsk by the 9th century. They had been migrating from further south and pushing the preceding Balts northwards. The valley of Svislach river was settlement boundary between two Early East Slavs' tribal unions – Krivich and Dregovichs...
. In 1773 a post-Jesuit academy had been founded in Minsk by the Commission of National Education.

All voivodeships played an important role within the Polish political system, extended to Lithuania by the Polish-Lithuanian union
Polish-Lithuanian Union
The term Polish–Lithuanian Union sometimes called as United Kingdom of Poland and Lithuania refers to a series of acts and alliances between the Kingdom of Poland and the Grand Duchy of Lithuania that lasted for prolonged periods of time and led to the creation of the Polish–Lithuanian...
s. Following the final Union of Lublin
Union of Lublin
The Union of Lublin replaced the personal union of the Kingdom of Poland and the Grand Duchy of Lithuania with a real union and an elective monarchy, since Sigismund II Augustus, the last of the Jagiellons, remained childless after three marriages. In addition, the autonomy of Royal Prussia was...
of 1569, the Minsk Voivodeship received two seats within the Senate. The seats were held ex officio by the voivod and the castellan
Castellan
A castellan was the governor or captain of a castle. The word stems from the Latin Castellanus, derived from castellum "castle". Also known as a constable.-Duties:...
of Minsk. Each of the three powiats organized its own Sejmik
Sejmik
A sejmik was a regional assembly in the Polish–Lithuanian Commonwealth, and earlier in the Kingdom of Poland. Sejmiks existed until the end of the Commonwealth in 1795 following the partitions of the Commonwealth...
, which had a right to elect two members of Sejm
Sejm
The Sejm is the lower house of the Polish parliament. The Sejm is made up of 460 deputies, or Poseł in Polish . It is elected by universal ballot and is presided over by a speaker called the Marshal of the Sejm ....
each, and two deputies to the Lithuanian Tribunal
Lithuanian Tribunal
The Lithuanian Tribunal was the highest appeal court for the nobility of the Grand Duchy of Lithuania. It was established by Stefan Batory, Grand Duke of Lithuania and King of Poland, in 1581 as the counterpart to the Crown Tribunal of the Crown of the Polish Kingdom, established in 1578...
.

The three cities were also entitled to house local courts. Since 1599, the Tribunal of Lithuania did also held sessions in Minsk (every three years, other cities it visited were Vilnius and Navahrudak). The court held there served the role of the highest juridical authority for all of Ruthenian voivodeships, that is Minsk, Nowogródek, Vitebsk, Mstislav and Kiev. Following the first partition of Poland
Partitions of Poland
The Partitions of Poland or Partitions of the Polish–Lithuanian Commonwealth took place in the second half of the 18th century and ended the existence of the Polish–Lithuanian Commonwealth, resulting in the elimination of sovereign Poland for 123 years...
in 1775, the tribunal abandoned Minsk and held its sessions in Hrodna
Hrodna
Grodno or Hrodna , is a city in Belarus. It is located on the Neman River , close to the borders of Poland and Lithuania . It has 327,540 inhabitants...
.

Much like other Ruthenian lands, the Minsk voivodeship signed its documents with the Pogoń
Pogon
Pogoń or Pahonia , meaning The Chase, also Vytis in Lithuanian language, represents a Knight-in-pursuit coat of arms of the Grand Duchy of Lithuania and of several of its noble families:* Pogoń Litewska Coat of Arms, the original variant...
(Chase) coat of arms. The flag was Or, in field Gules a chase Carnation. The official uniform was a crimson kontusz
Kontusz
Kontusz - a type of outer garment worn by the Hungarian, Polish, Belarusian, Lithuanian and Ukrainian male nobility...
and żupan
Zupan
Żupan was a long garment, always lined, worn by almost all males of the noble social class in the Polish-Lithuanian Commonwealth, typical male attire from the beginning of the 16th to half of the 18th century, still surviving as a part of the Polishnational dress.- Derivation :The name żupan has...
, with a navy blue collar. The powiat of Rechytsa adopted a white żupan with white collar.
The source of this article is wikipedia, the free encyclopedia.  The text of this article is licensed under the GFDL.