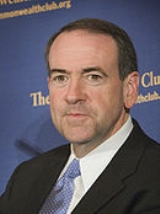 Huckabee is the author
Author
An author is broadly defined as "the person who originates or gives existence to anything" and that authorship determines responsibility for what is created. Narrowly defined, an author is the originator of any written work.-Legal significance:...
of several best selling books, an ordained Southern Baptist minister, musician
Musician
A musician is an artist who plays a musical instrument. It may or may not be the person's profession. Musicians can be classified by their roles in performing music and writing music.Also....* A person who makes music a profession....
and a public speaker.

Regarding the wikipedia:FairTax|FairTax proposal -- "It's the best proposal that we ought to have because it's flatter, it's fairer, it's finite, it's family friendly. And instead, we've had a Congress that spent money like John Edwards at a beauty shop," he said. - Republican presidential candidate debate in Johnston, Iowa. 12/12/07

When our founding fathers put their signatures on the Declaration of Independence, those 56 brave people, most of whom by the way were clergymen, they said that we had certain inalienable rights given to us by our Creator. - Republican debate on 10/21/07 :Speech to the Family Research Council|FRCAction's Washington Briefing (22 September 2006)

We need to get past the paperwork and to the people.

The simplest way to an act of Fair Tax. That is the first thing I would love to do is put the IRS out of business and quit wasting the 10 billion dollars it costs to operate. If we had a fair tax it would eliminate all the various taxes hidden in our system it would be a revenue neutral its the best proposal we need to have. It's fairer, Flatter, and family friendly we had congress spend money like John Edwards was in a beauty shop.

People who are tired of K Street corruption and Wall Street greed are ready for Main Street Values.