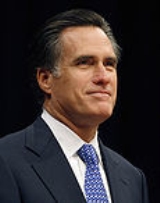 The son of George W. Romney
George W. Romney
George Wilcken Romney was an American businessman and Republican Party politician. He was chairman and CEO of American Motors Corporation from 1954 to 1962, the 43rd Governor of Michigan from 1963 to 1969, and the United States Secretary of Housing and Urban Development from 1969 to 1973...
(the former Governor of Michigan
Governor of Michigan
The Governor of Michigan is the chief executive of the U.S. State of Michigan. The current Governor is Rick Snyder, a member of the Republican Party.-Gubernatorial elections and term of office:...
) and Lenore Romney
Lenore Romney
Lenore LaFount Romney was the former First Lady of Michigan and later a candidate for the U.S. Senate in 1970 from Michigan. Her husband, George Romney was the former Governor of Michigan, presidential candidate in 1968 and Secretary of Housing and Urban Development...
(née LaFount), Mitt Romney was raised in Bloomfield Hills, Michigan
Bloomfield Hills, Michigan
Bloomfield Hills is a city in Oakland County of the U.S. state of Michigan, northwest of downtown Detroit. As of the 2010 census, the city population was 3,869...
and later served as a Mormon missionary
Mormon missionary
The Church of Jesus Christ of Latter-day Saints is one of the most active modern practitioners of missionary work, with over 52,000 full-time missionaries worldwide, as of the end of 2010...
in France.

How did Mitt Romney make his fortune? Whatis his net worth?

I have a personal and private message for Mitt. Can anyone give me an address or email that is private?
More

Senator Kerry now tells us he has a clear position on the [war on terror]. He voted no on [Desert Storm] in 1991 and yes on [Desert Shield] today. Then he voted no on [troop funding], just after he'd voted yes. He's campaigned against the [war] all year, but says he'd vote yes today. This nation can't afford [presidential leadership] that comes in 57 varieties.

Speech at the Republican Convention, 2004.

For all the conflicting views on this issue, it speaks well of our country that we recognize [abortion] as a problem. The [law] may call it a right, but no one ever called it a good, and, in the quiet of conscience people of both political parties know that more than a million abortions a year cannot be squared with the good heart of America.

We cannot continue to have an excellence gap with the rest of the world and intend to remain the [economic superpower] and [military superpower] of the planet. That's just not going to happen. We're in a position where unless we take action, we'll end up being the [France] of the 21st century: a lot of talk, but not a lot of strength behind it in terms of economic capability.

The [president] is right to point to an international [jihadist] movement aimed at the collapse of the United States. He has gone after that threat in the right way and with great energy and vigor, and I applaud the fact that he has taken it on very seriously and has not considered it just a criminal action but instead a war action, which requires a military ... response.

I think we ought to have more oil. We ought to develop more sources of oil so that we can increase our supply. But the last thing I want to do is suck it all dry as quickly as we can. I want to use less of it.