Encyclopedia
Midyat is an originally Assyrian/Syriac town in Mardin Province
Mardin Province
Mardin Province is a province of Turkey with a population of 744,606. The population was 835,173 in 2000. The capital of the Mardin Province is Mardin...
of Turkey
Turkey
Turkey , known officially as the Republic of Turkey , is a Eurasian country located in Western Asia and in East Thrace in Southeastern Europe...
. The ancient city is the epicenter of a centuries-old Assyrian/Syriac enclave in Southeast-Turkey, widely familiar under its Syriac name Tur Abdin
Tur Abdin
Tur Abdin is a hilly region of south east Turkey incorporating the eastern half of Mardin Province, and Şırnak Province west of the Tigris, on the border with Syria. The name 'Tur Abdin' is from the Syriac language meaning 'mountain of the servants '. Tur Abdin is of great importance to Syriac...
. A cognate of the name Midyat is first encountered in an inscription of the Neo-Assyrian king Ashur-nasir-pal II
Ashur-nasir-pal II
Ashur-nasir-pal II was king of Assyria from 883 to 859 BC.Ashurnasipal II succeeded his father, Tukulti-Ninurta II, in 883 BC...
(883-859 B.C.). This royal text depicts how Assyria
Assyria
Assyria was a Semitic Akkadian kingdom, extant as a nation state from the mid–23rd century BC to 608 BC centred on the Upper Tigris river, in northern Mesopotamia , that came to rule regional empires a number of times through history. It was named for its original capital, the ancient city of Assur...
n forces conquered the city and its surrounding villages. In its long history, the city of Midyat has remained politically subjected by various rulers - from the Assyrian Empire to the modern Turks.
Due to repeated marauding from invading Mongol and Turkish tribes into Tur Abdin culminating in the end of the 14th, 19th and beginning of the 20th century - the Assyrian/Syriac population of Tur-'Abdin was severely decimated. The Assyrian Genocide
Assyrian genocide
The Assyrian Genocide refers to the mass slaughter of the Assyrian/Chaldean/Syriac population of the Ottoman Empire during the 1890s, the First World War, and the period of 1922-1925...
of World War I wiped out large numbers of ethnic Syriac Christians in Turkey. 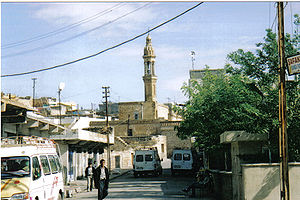 After the so-called Gastarbeiter
Gastarbeiter
Gastarbeiter is German for "guest worker." It refers to migrant workers who had moved to West Germany mainly in the 1960s and 70s, seeking work as part of a formal guest worker programme...
('guest worker') era, though, commencing in the early 1960s, the city was soon to be nearly completely emptied from its native inhabitants who choose to leave for a better life offered in Western Countries. Soon other local Arabic and Kurdish inhabitants start building houses in the surrounding areas. The houses and churches belonging to Christians have been preserved although many of them are empty.
The source of this article is wikipedia, the free encyclopedia.  The text of this article is licensed under the GFDL.