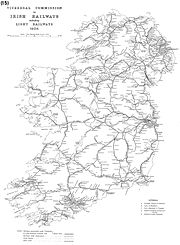 The MGWR received a grant of £264,000 to build a railway to Clifden
Clifden
Clifden is a town on the coast of County Galway, Ireland and being Connemara's largest town, it is often referred to as "the Capital of Connemara". It is located on the Owenglen River where it flows into Clifden Bay...
, with stations at Moycullen
Moycullen
Moycullen Moycullen Moycullen (official name: Maigh Cuilinn, Plain of Holly, or Plain of Cullen (a local giant) is a suburban village in County Galway, Ireland, about 10 km (7 mi) north west of Galway city. It is located near Lough Corrib, on the N59 road to Oughterard and Clifden in...
, Oughterard
Oughterard
Oughterard is a small town on the banks of the Owenriff River close to the western shore of Lough Corrib in County Galway, Ireland. The population of the town in 2006 was 1,305...
, Maam Cross
Maam Cross
Maam Cross is a crossroads in Connemara, County Galway, Ireland. It lies within the townland of Shindilla.-Transport:*Maam Cross railway station opened on 1 January 1896 and finally closed on 29 April 1935.-See also:...
, Recess
Recess, County Galway
Recess is a village in County Galway, Ireland. Its official name is in Irish, Sraith Saileach, and translates as "stream of the willow tree".-Transport:*Recess railway station opened on 1 July 1895 and was closed on 29 April 1935....
and Ballynahinch
Ballynahinch
Ballynahinch is the name of a number of towns in Ireland:*Ballynahinch, County Down, a town in Northern Ireland*Ballynahinch, County Armagh, a townland in County Armagh, Northern Ireland*Ballynahinch, County Galway in the Republic of Ireland...
. The railway opened on 1 July 1895 but due to its inland route it did not serve the bulk of the area's population. It was closed in 1935.

A similar branch line was built at the same time from Westport
Westport, County Mayo
Westport is a town in County Mayo, Ireland. It is situated on the west coast at the south-east corner of Clew Bay, an inlet of the Atlantic Ocean....
to Achill, via Newport and Mulrany. The line was closed in 1937.

The MGWR painted its locomotives bright green until 1905, when an experimental but short-lived dark blue was tried on some engines. This did not wear well and the company reverted to green. From about 1918 locos were painted gloss black until the MGWR became part of the GSR.

Passenger coaches were finished in varnish or brown paint until the advent of the blue livery. As on the locomotives, this was so short lived that few coaches ever received it. The MGWR reverted to brown, though after 1910 this was not so well-adorned with lining. From 1918 coaches were painted a very dark crimson, and after 1924 the GSR adopted a very similar shade.

The former MGWR's main lines still operational are owned by Iarnród Éireann
Iarnród Éireann
Iarnród Éireann is the national railway system operator of Ireland. Established on 2 February 1987, it is a subsidiary of Córas Iompair Éireann . It operates all internal intercity, commuter and freight railway services in the Republic of Ireland, and, jointly with Northern Ireland Railways, the...
. Routes between Dublin and Sligo, Athlone and Galway, Athlone and Westport and the Ballina branch remain open to passenger traffic. The Meath on Track campaign is campaigning to have the Navan – Clonsilla line (not to be confused with the former GNR Navan – Drogheda line) reopened earlier than the 2015 date announced under Transport 21
Transport 21
Transport 21 is an Irish infrastructure plan, announced in November 2005. It aims to greatly expand Ireland's transport network. A cost estimate of €34 billion was attached to the plan at the time....
. The Edenderry, Clifden, Achill, Cavan, Killeshandra, Ballaghaderreen, Ballinrobe, Killala and Loughrea branches lines are all closed.

Platform 11
Platform 11
Rail Users Ireland is a rail transport pressure group in Ireland whose agenda is centred on the idea that there is an economic case for expanding rail transport in Ireland through better utilization of existing infrastructure with only justified expansion of existing routes...
has proposed running some – Dublin services via the MGWR station in and the disused route via to , reinstating the route of the first MGWR service via the former GS&WR line. The current Galway service runs from .

Three former MGWR stations are now hotels, two of which are called the "Station House Hotel" but are unconnected by ownership. They are the much-expanded former Clifden station in Co. Galway, Kilmessan Junction in Co. Meath and the Mullranny Park Hotel at Mulranny
Mulranny
Mallaranny —sometimes spelt as Malaranny, Mullaranny, Mullranny or Mulranny—is a seaside village on the isthmus between Clew Bay and Blacksod Bay in County Mayo, Ireland. Mallaranny is the home of colourful giant fuchsias and exotic plants...
, Co. Mayo.

The Great Western Greenway is a greenway
Greenway (landscape)
A greenway is a long, narrow piece of land, often used for recreation and pedestrian and bicycle user traffic, and sometimes for streetcar, light rail or retail uses.- Terminology :...
rail trail
Rail trail
A rail trail is the conversion of a disused railway easement into a multi-use path, typically for walking, cycling and sometimes horse riding. The characteristics of former tracks—flat, long, frequently running through historical areas—are appealing for various development. The term sometimes also...
that utilises the route of the former Westport – Achill branch line.

No MGWR locomotive has been preserved but several of its standard six-wheeled carriages exist. One stands derelict at the Station House Hotel in Clifden and another three are on the Downpatrick and County Down Railway. Another, owned by the Railway Preservation Society of Ireland
Railway Preservation Society of Ireland
The Railway Preservation Society of Ireland is an Irish railway preservation group operating in both the Republic of Ireland and Northern Ireland. It was founded in 1964. The Society has its headquarters at Whitehead, County Antrim, Northern Ireland and a base at Mullingar, County Westmeath...
, is being refurbished for public use on the Downpatrick line. The MGWR's unique saloon coach built for William Dargan
William Dargan
William Dargan , an engineer, often seen as the father of Irish railways, came from Killeshin, County Laois, Ireland. Born in 1799, he constructed Ireland's first railway from Dublin to Dún Laoghaire in 1833. He constructed over of railway to important urban centres of Ireland...
is at the Ulster Folk and Transport Museum
Ulster Folk and Transport Museum
The Ulster Folk and Transport Museum is situated in Cultra, Northern Ireland, about east of the city of Belfast. It comprises two separate museums, the Folk Museum and the Transport Museum...
, Cultra
Cultra
Cultra is a residential suburban area adjacent to Holywood, County Down, Northern Ireland, part of Greater Belfast. It is also the name of an electoral ward of North Down Borough Council. It is comfortably one of Northern Ireland's most affluent areas...
, County Down
County Down
-Cities:*Belfast *Newry -Large towns:*Dundonald*Newtownards*Bangor-Medium towns:...
, Northern Ireland
Northern Ireland
Northern Ireland is one of the four countries of the United Kingdom. Situated in the north-east of the island of Ireland, it shares a border with the Republic of Ireland to the south and west...
.