Encyclopedia
The Miami-Dade Police Department (MDPD), formerly known as the Metro-Dade County Police Department (1981–1997), Dade County Public Safety Department (1957–1981) and the Dade County Sheriff's Office (1836–1957) is a Limited Service County Police
County police
County police are the police of a county in the United States, Sweden and England .- Sweden :All of the 21 Counties of Sweden contains a County Police Department of the Swedish Police Service.-United Kingdom:...
Department serving Miami-Dade County, Florida
Miami-Dade County, Florida
Miami-Dade County is a county located in the southeastern part of the state of Florida. As of 2010 U.S. Census, the county had a population of 2,496,435, making it the most populous county in Florida and the eighth-most populous county in the United States...
's unincorporated areas, although they have lenient mutual aid agreements with other incorporated
Municipal corporation
A municipal corporation is the legal term for a local governing body, including cities, counties, towns, townships, charter townships, villages, and boroughs. Municipal incorporation occurs when such municipalities become self-governing entities under the laws of the state or province in which...
municipalities, most often the City of Miami Police Department
Miami Police Department
The Miami Police Department or MPD, often referred to as the City of Miami Police, is the chief police department of the U.S. city of Miami, Florida. Their jurisdiction lies within the actual city limits of Miami, but have mutual aid agreements with neighboring police departments. The current...
. The MDPD is the largest police department in the Southeastern United States
Southeastern United States
The Southeastern United States, colloquially referred to as the Southeast, is the eastern portion of the Southern United States. It is one of the most populous regions in the United States of America....
, with approximately 4,700 employees. The Department is still often referred by its former name, the Metro-Dade Police or simply Metro. Miami-Dade Police officers are easily identified by their taupe/brown colored uniforms. Miami-Dade Police vehicles are identified by their green and white livery. MDPD officers carry silver badges, while officers with the ranks of sergeant and above carry gold badges. 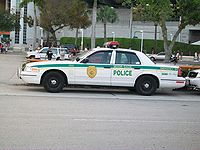 The Dade County Sheriff's Office was created in 1836 to serve the newly created County of Dade
Miami-Dade County, Florida
Miami-Dade County is a county located in the southeastern part of the state of Florida. As of 2010 U.S. Census, the county had a population of 2,496,435, making it the most populous county in Florida and the eighth-most populous county in the United States...
, which originally consisted of the area comprised by the present-day counties of Miami-Dade, Broward, Palm Beach
Palm Beach County, Florida
Palm Beach County is the largest county in the state of Florida in total area, and third in population. As of 2010, the county's estimated population was 1,320,134, making it the twenty-eighth most populous in the United States...
and Martin
Martin County, Florida
Martin County is a county in the U.S. state of Florida. As of 2000, the population was 126,731. The U.S. Census Bureau 2008 estimate for the county is 138,660. Its county seat is Stuart, Florida.- History :...
. In the early years, the entire area was policed by as few as three deputies on horseback, and Dade’s sheriffs were appointed by the Governor. In 1899, the office of the sheriff became an elected position. By 1915, the jurisdiction area had been reduced to its present size of approximately 2,139 square miles.

On September 13, 2007 four Miami-Dade Police Department officers were shot by a subject with an AK-47
AK-47
The AK-47 is a selective-fire, gas-operated 7.62×39mm assault rifle, first developed in the Soviet Union by Mikhail Kalashnikov. It is officially known as Avtomat Kalashnikova . It is also known as a Kalashnikov, an "AK", or in Russian slang, Kalash.Design work on the AK-47 began in the last year...
, resulting in the death of one officer, Jose Somohano. Another officer suffered a serious leg injury. The suspect, Shawn Sherwin Labeet, fled the scene but was found in an apartment complex later that day. He was cornered in a poolhouse bathroom by members of Miami-Dade Police Special Response Team (equivalent to SWAT
SWAT
A SWAT team is an elite tactical unit in various national law enforcement departments. They are trained to perform high-risk operations that fall outside of the abilities of regular officers...
), and was shot and killed when he refused to drop a pistol he was holding.

In the early Thursday afternoon of January 20, 2011, two Miami-Dade Police officers were shot and killed by a suspect who opened fire on police. According to Miami-Dade Police Director James Loftus, the Miami-Dade police fugitive warrant team were assisting the US Marshals Service in the city of Miami on a man who had a murder warrant. When police arrived they made contact with a member of the family, then there were an exchange of gunshots. Detective Roger Castillo a 21-year veteran, was shot in the head and died at the scene and Detective Amanda Haworth a 23-year veteran, was shot several times and taken to Jackson Memorial Hospital's Ryder Trauma Center in critical condition. She underwent surgery there, but she died Thursday afternoon. Witnesses say they heard eight to 12 shots. Streets were blocked off with police tape as United States Marshals Service
United States Marshals Service
The United States Marshals Service is a United States federal law enforcement agency within the United States Department of Justice . The office of U.S. Marshal is the oldest federal law enforcement office in the United States; it was created by the Judiciary Act of 1789...
walked the streets in riot gear.

Breakdown of the makeup of the rank and file of MDPD


All rank insignia are worn on the collars of the shirt, except for Sergeant and Corporal, which are worn on each sleeve, below the department patch.

Miami-Dade Police is the law enforcement agency depicted in the television shows, films, and video games: