Encyclopedia
The Meuse-Argonne American Cemetery and Memorial is a 130.5 acre (0.52811523 km²) World War I
World War I
World War I , which was predominantly called the World War or the Great War from its occurrence until 1939, and the First World War or World War I thereafter, was a major war centred in Europe that began on 28 July 1914 and lasted until 11 November 1918...
cemetery in France
France
The French Republic , The French Republic , The French Republic , (commonly known as France , is a unitary semi-presidential republic in Western Europe with several overseas territories and islands located on other continents and in the Indian, Pacific, and Atlantic oceans. Metropolitan France...
. It is located east of the village of Romagne-sous-Montfaucon
Romagne-sous-Montfaucon
Romagne-sous-Montfaucon is a commune in the Meuse department in Lorraine in north-eastern France.-See also:The nearby U.S cemetery is the largest for the First World War.*Communes of the Meuse department...
in Meuse
Meuse
Meuse is a department in northeast France, named after the River Meuse.-History:Meuse is one of the original 83 departments created during the French Revolution on March 4, 1790...
. The cemetery contains the largest number of American military dead in Europe (14,246), most of whom lost their lives during the Meuse-Argonne Offensive
Meuse-Argonne Offensive
The Meuse-Argonne Offensive, or Maas-Argonne Offensive, also called the Battle of the Argonne Forest, was a part of the final Allied offensive of World War I that stretched along the entire western front.-Overview:...
and were buried there. Two such notable burials are Medal of Honor
Medal of Honor
The Medal of Honor is the highest military decoration awarded by the United States government. It is bestowed by the President, in the name of Congress, upon members of the United States Armed Forces who distinguish themselves through "conspicuous gallantry and intrepidity at the risk of his or her...
awardees Lt. Frank Luke
Frank Luke
Frank Luke Jr. was an American fighter ace, ranking second among U.S. Army Air Service pilots after Captain Eddie Rickenbacker in number of aerial victories during World War I . Frank Luke was the first airman to receive the Medal of Honor...
"The balloon buster" (the first airman to receive the Medal of Honor) and Corporal Freddie Stowers
Freddie Stowers
Freddie Stowers was a Corporal in the United States Army who posthumously received the Medal of Honor for his actions in World War I while serving in an American unit under French command....
(posthumously awarded the Medal of Honor 73 years after his death in action). The cemetery consists of eight sections behind a large central reflection pool. Beyond the grave sections is a chapel which is decorated with stained glass windows depicting American units' insignias. Along the walls of the chapel area are the tablets of the missing
Missing in action
Missing in action is a casualty Category assigned under the Status of Missing to armed services personnel who are reported missing during active service. They may have been killed, wounded, become a prisoner of war, or deserted. If deceased, neither their remains nor grave can be positively...
which include the names of those soldiers who fought in the region and in northern Russia, but have no known grave. It also includes the Montfaucon American Monument
Montfaucon American Monument
The World War I Montfaucon American Monument is a monument commemorating the American victory in the Meuse-Argonne Offensive during World War I. It is located in Montfaucon-d'Argonne in Lorraine, France...
. This cemetery is maintained by the American Battle Monuments Commission
American Battle Monuments Commission
The American Battle Monuments Commission is a small independent agency of the United States government. Established by Congress in 1923, it is responsible for:...
. It is open daily to the public from 9:00 a.m. to 5:00 p.m. The cemetery is closed January 1 and December 25, but is open on all other holidays. 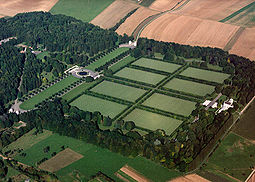 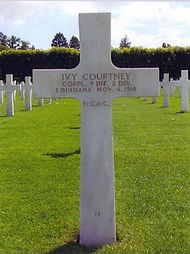