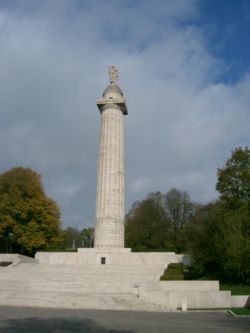 The World War I
World War I
World War I , which was predominantly called the World War or the Great War from its occurrence until 1939, and the First World War or World War I thereafter, was a major war centred in Europe that began on 28 July 1914 and lasted until 11 November 1918...
Montfaucon American Monument is a monument commemorating the American victory in the Meuse-Argonne Offensive
Meuse-Argonne Offensive
The Meuse-Argonne Offensive, or Maas-Argonne Offensive, also called the Battle of the Argonne Forest, was a part of the final Allied offensive of World War I that stretched along the entire western front.-Overview:...
during World War I. It is located in Montfaucon-d'Argonne
Montfaucon-d'Argonne
Montfaucon-d'Argonne is a commune in the Meuse department in Lorraine in north-eastern France.-See also:* Montfaucon American Monument* Communes of the Meuse department...
in Lorraine
Lorraine (région)
Lorraine is one of the 27 régions of France. The administrative region has two cities of equal importance, Metz and Nancy. Metz is considered to be the official capital since that is where the regional parliament is situated...
, France
France
The French Republic , The French Republic , The French Republic , (commonly known as France , is a unitary semi-presidential republic in Western Europe with several overseas territories and islands located on other continents and in the Indian, Pacific, and Atlantic oceans. Metropolitan France...
. The American Battle Monuments Commission
American Battle Monuments Commission
The American Battle Monuments Commission is a small independent agency of the United States government. Established by Congress in 1923, it is responsible for:...
maintains the monument.

The monument is made of a large Doric
Doric order
The Doric order was one of the three orders or organizational systems of ancient Greek or classical architecture; the other two canonical orders were the Ionic and the Corinthian.-History:...
-style granite column, on top of which lies a statue symbolizing liberty ruins of the ancient village. It commemorates the American victory during the Meuse-Argonne Offensive of 26 September 1918 to 11 November 1918. during which the United States army forced the enemy to retreat. On the walls of the foyer is an account of the battle and pays homage to the troops who served there. The observation platform of the memorial can be reached by ascending two hundred thirty four stairs, and offers a view of the battlefield.