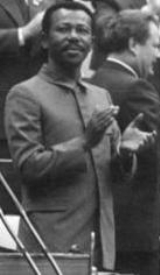 Overview
Mengistu Haile Mariam (born 21 May 1937) is a politician who was formerly the most prominent officer of the Derg
Derg
The Derg or Dergue was a Communist military junta that came to power in Ethiopia following the ousting of Haile Selassie I. Derg, which means "committee" or "council" in Ge'ez, is the short name of the Coordinating Committee of the Armed Forces, Police, and Territorial Army, a committee of...
, the Communist military junta
Military junta
A junta or military junta is a government led by a committee of military leaders. The term derives from the Spanish language junta meaning committee, specifically a board of directors...
that governed Ethiopia
Ethiopia
Ethiopia , officially known as the Federal Democratic Republic of Ethiopia, is a country located in the Horn of Africa. It is the second-most populous nation in Africa, with over 82 million inhabitants, and the tenth-largest by area, occupying 1,100,000 km2...
from 1974 to 1987, and the President of the People's Democratic Republic of Ethiopia
People's Democratic Republic of Ethiopia
The People's Democratic Republic of Ethiopia was the official name of Ethiopia from 1987 to 1991, as established by the Communist government of Mengistu Haile Mariam and the Workers' Party of Ethiopia...
from 1987 to 1991. He oversaw the Ethiopian Red Terror
Red Terror (Ethiopia)
The Ethiopian Red Terror, or Qey Shibir , was a violent political campaign in Ethiopia that most visibly took place once Communist Mengistu Haile Mariam achieved control of the Derg, the military junta, 3 February 1977...
of 1977–1978, a campaign of repression against the Ethiopian People's Revolutionary Party
Ethiopian People's Revolutionary Party
Founded in April 1972, the Ethiopian People's Revolutionary Party was a prominent Marxist-Leninist organization in Ethiopia during the 1970s. It is also known as "Ihapa" from the acronym in Amharic...
and other anti-Derg factions. Mengistu fled to Zimbabwe
Zimbabwe
Zimbabwe is a landlocked country located in the southern part of the African continent, between the Zambezi and Limpopo rivers. It is bordered by South Africa to the south, Botswana to the southwest, Zambia and a tip of Namibia to the northwest and Mozambique to the east. Zimbabwe has three...
in 1991 at the conclusion of the Ethiopian Civil War
Ethiopian Civil War
The Ethiopian Civil War began on September 12, 1974 when the Marxist Derg staged a coup d'état against Emperor Haile Selassie, and lasted until the Ethiopian People's Revolutionary Democratic Front , a coalition of rebel groups, overthrew the government in 1991. The war overlapped other Cold War...
, and remains there despite an Ethiopian court verdict finding him guilty in absentia
In absentia
In absentia is Latin for "in the absence". In legal use, it usually means a trial at which the defendant is not physically present. The phrase is not ordinarily a mere observation, but suggests recognition of violation to a defendant's right to be present in court proceedings in a criminal trial.In...
of genocide
Genocide
Genocide is defined as "the deliberate and systematic destruction, in whole or in part, of an ethnic, racial, religious, or national group", though what constitutes enough of a "part" to qualify as genocide has been subject to much debate by legal scholars...
.
Unsubstantiated accounts allege that Mengistu Haile Mariam's mother was the illegitimate daughter of Dejazmatch Kebede Tessema, a high ranking nobleman and Crown Councilor to Emperor Haile Selassie, and himself suspected of being the illegitimate son of Emperor Menelik II.

Response to the person who wrote about Mengistu
More
x