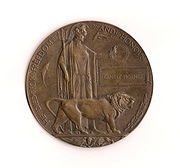 The Memorial Plaque was issued after the First World War to the next-of-kin of all British and Empire
British Empire
The British Empire comprised the dominions, colonies, protectorates, mandates and other territories ruled or administered by the United Kingdom. It originated with the overseas colonies and trading posts established by England in the late 16th and early 17th centuries. At its height, it was the...
service personnel who were killed as a result of the war.

The plaques were made of bronze
Bronze
Bronze is a metal alloy consisting primarily of copper, usually with tin as the main additive. It is hard and brittle, and it was particularly significant in antiquity, so much so that the Bronze Age was named after the metal...
, and hence popularly known as the "Dead Man’s Penny", because of the similarity in appearance to the somewhat smaller penny coin
Penny (British pre-decimal coin)
The penny of the Kingdom of Great Britain and later of the United Kingdom, was in circulation from the early 18th century until February 1971, Decimal Day....
. 1,355,000 plaques were issued, which used a total of 450 tonnes of bronze, and continued to be issued into the 1930s to commemorate people who died as a consequence of the war.

It was decided that the design of the plaque, about 5 inches (120 mm) in diameter and cast in bronze, was to be picked from submissions made in a public competition. Over 800 designs were submitted and the competition was won by the sculptor and medallist Edward Carter Preston
Edward Carter Preston
Edward Carter Preston was an English artist, born in Liverpool. He was a renowned sculptor and medallist. The artist designed the bronze memorial plaques presented to the families of British servicemen and women who died during the First World War...
with his design called Pyramus, receiving a first place prize of £250.

This token includes an image of Britannia
Britannia
Britannia is an ancient term for Great Britain, and also a female personification of the island. The name is Latin, and derives from the Greek form Prettanike or Brettaniai, which originally designated a collection of islands with individual names, including Albion or Great Britain. However, by the...
holding a trident and standing with a lion. The designer's initials, E.CR.P., appear above the front paw
Paw
A paw is the soft foot of a mammal, generally a quadruped, that has claws or nails. A hard foot is called a hoof. Paws are used to pad feet for walking and increase friction.- Common characteristics :...
. In her left outstretched left hand Britannia holds an oak wreath above the rectangular tablet bearing the deceased's name cast in raised letters. The name does not include the rank since there was to be no distinction between sacrifices made by different individuals.
Two dolphins swim around Britannia, symbolizing Britain's sea power, and at the bottom a second lion is tearing apart the German eagle.

They were initially made at the Memorial Plaque Factory, 54/56 Church Road, Acton
Acton, London
Acton is a district of west London, England, located in the London Borough of Ealing. It is situated west of Charing Cross.At the time of the 2001 census, Acton, comprising the wards of East Acton, Acton Central, South Acton and Southfield, had a population of 53,689 people...
, W3, London from 1919. Early plaques did not have a number stamped on them but later ones have a number stamped behind the lion's back leg.

In December 1920 manufacture was shifted to the Royal Arsenal
Royal Arsenal
The Royal Arsenal, Woolwich, originally known as the Woolwich Warren, carried out armaments manufacture, ammunition proofing and explosives research for the British armed forces. It was sited on the south bank of the River Thames in Woolwich in south-east London, England.-Early history:The Warren...
, Woolwich. Plaques manufactured here can be identified by a circle containing the initials 'WA' on the back and by a number stamped between the tail and leg (in place of the number stamped behind the lions back leg).

The design was altered slightly during manufacture at Woolwich by Carter Preston since there was insufficient space in the original design between the lion's back paw and the H in "HE" to allow an "S" to be inserted to read "SHE" for the female plaques. The modification was to make the H slightly narrower to allow the S to be inserted. After around 1500 female plaques had been manufactured the moulds were modified to produce the male version by removing the S.

The plaques were issued in a pack with a commemorative scroll from King George V
George V of the United Kingdom
George V was King of the United Kingdom and the British Dominions, and Emperor of India, from 6 May 1910 through the First World War until his death in 1936....
; though sometimes the letter and scroll were sent first.

Smaller or miniature unofficial bronze plaques were produced by other manufacturers, for example Wright and Sons of Edgware, Middlesex, who sold them for 13 shilling
Shilling
The shilling is a unit of currency used in some current and former British Commonwealth countries. The word shilling comes from scilling, an accounting term that dates back to Anglo-Saxon times where it was deemed to be the value of a cow in Kent or a sheep elsewhere. The word is thought to derive...
s and sixpence each.

Modern replicas have also been made, and occasionally offered as genuine.