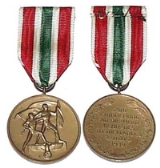 Encyclopedia
The Return of Memel Commemorative Medal (Die Medaille zur Erinnerung an die Heimkerhr des Memllandes 22. März 1939) was a decoration of Nazi Germany
Nazi Germany
Nazi Germany , also known as the Third Reich , but officially called German Reich from 1933 to 1943 and Greater German Reich from 26 June 1943 onward, is the name commonly used to refer to the state of Germany from 1933 to 1945, when it was a totalitarian dictatorship ruled by...
awarded in the interwar period
Interwar period
Interwar period can refer to any period between two wars. The Interbellum is understood to be the period between the end of the Great War or First World War and the beginning of the Second World War in Europe....
, and the last of the series of Occupation Medals
German Occupation Medals
The German Occupation Medals were a series of awards, also known as the "Flower War medals", created to commemorate the annexation of Austria, Czechoslovakia and the Memelland by Nazi Germany in the interwar period...
.

In the last bloodless action, Germany
Nazi Germany
Nazi Germany , also known as the Third Reich , but officially called German Reich from 1933 to 1943 and Greater German Reich from 26 June 1943 onward, is the name commonly used to refer to the state of Germany from 1933 to 1945, when it was a totalitarian dictatorship ruled by...
annexed the Klaipėda Region
Klaipėda Region
The Klaipėda Region or Memel Territory was defined by the Treaty of Versailles in 1920 when it was put under the administration of the Council of Ambassadors...
(Memel Territory) from Lithuania
Lithuania
Lithuania , officially the Republic of Lithuania is a country in Northern Europe, the biggest of the three Baltic states. It is situated along the southeastern shore of the Baltic Sea, whereby to the west lie Sweden and Denmark...
on March 22, 1939 after an oral ultimatum
1939 German ultimatum to Lithuania
1939 German ultimatum to Lithuania was an oral ultimatum presented to Juozas Urbšys, Foreign Minister of Lithuania, by Joachim von Ribbentrop, Foreign Minister of Nazi Germany, on March 20, 1939...
. On March 23 a peaceful occupation of the city and district was carried out by German troops who debarked by ship. This area of East Prussia, with 160,000 inhabitants, had been turned over to Lithuania in the aftermath of World War I following the Klaipėda Revolt
Klaipeda Revolt
The Klaipėda Revolt took place in January 1923 in the Klaipėda Region . The region, located north of the Neman River, was detached from the East Prussia of the German Empire by the Treaty of Versailles and became a mandate of the League of Nations. It was placed under provisional French...
and Klaipėda Convention
Klaipėda Convention
Klaipėda Convention was an international agreement between Lithuania and the countries of the Conference of Ambassadors signed in Paris on May 8, 1924. According to the Convention, the Klaipėda Region became an autonomous region under unconditional sovereignty of Lithuania...
of 1924. To commemorate the occupation the "Memel Medal" was authorized on May 1, 1939. It was awarded until December 1, 1940. In all 31,322 medals were awarded.

The medal was designed by Professor Richard Klein
Richard Klein (artist)
Richard Klein was a German artist, known mainly for his work as a favoured artist of the Nazi regime. Klein was director of the Munich School of Applied Arts and was one of Hitler's favourite painters....
. While the obverse was the exactly the same as the previous two medals, the reverse read "Zur Erinnerung an die Heimkerhr des Memellandes 22. März 1939" (to commemorate the return of the Memelland on March 22, 1939), surrounded by an oak leave wreath instead of the Nazi Party slogan. The award was presented to all military, political and civil personnel who had distinguished themselves in actions related to the annexation of the district to Germany.

The medal was die struck with a bronzed finish and worn on the left tunic pocket suspended from a white ribbon with a green strip in the middle and two red strips on each side, the historic colors of Lithuania.