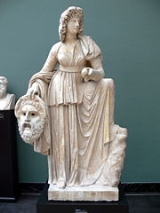 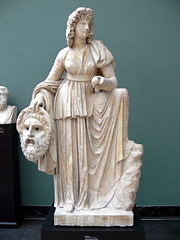 Melpomene , initially the Muse
Muse
The Muses in Greek mythology, poetry, and literature, are the goddesses who inspire the creation of literature and the arts. They were considered the source of the knowledge, related orally for centuries in the ancient culture, that was contained in poetic lyrics and myths...
of Singing, she then became the Muse of Tragedy, for which she is best known now. Her name was derived from the Greek verb melpô or melpomai meaning "to celebrate with dance and song." She is often represented with a tragic mask and wearing the cothurnus, boots traditionally worn by tragic actors. Often, she also holds a knife or club in one hand and the tragic mask in the other. On her head she is shown wearing a crown of cypress
Cupressus sempervirens
Cupressus sempervirens, the Mediterranean Cypress is a species of cypress native to the eastern Mediterranean region, in northeast Libya, southeast Greece , southern Turkey, Cyprus, Northern Egypt, western Syria, Lebanon, Israel, Malta, Italy, western Jordan, and also a disjunct population in...
.

Melpomene is the daughter of Zeus
Zeus
In the ancient Greek religion, Zeus was the "Father of Gods and men" who ruled the Olympians of Mount Olympus as a father ruled the family. He was the god of sky and thunder in Greek mythology. His Roman counterpart is Jupiter and his Etruscan counterpart is Tinia.Zeus was the child of Cronus...
and Mnemosyne
Mnemosyne
Mnemosyne , source of the word mnemonic, was the personification of memory in Greek mythology. This titaness was the daughter of Gaia and Uranus and the mother of the nine Muses by Zeus:* Calliope * Clio * Erato...
. Her sisters include Calliope
Calliope
In Greek mythology, Calliope was the muse of epic poetry, daughter of Zeus and Mnemosyne, and is now best known as Homer's muse, the inspiration for the Odyssey and the Iliad....
(muse of epic poetry), Clio
Clio
thumb|Clio—detail from [[The Art of Painting|The Allegory of Painting]] by [[Johannes Vermeer]]In Greek mythology, Clio or Kleio, is the muse of history. Like all the muses, she is a daughter of Zeus and Mnemosyne...
(muse of history), Euterpe
Euterpe
In Greek mythology, Euterpe + τέρπειν terpein ) was one of the Muses, the daughters of Mnemosyne, fathered by Zeus. Called the "Giver of delight", when later poets assigned roles to each of the Muses, she was the muse of music. In late Classical times she was named muse of lyric poetry and...
(muse of lyrical poetry), Terpsichore
Terpsichore
In Greek mythology, Terpsichore "delight of dancing" was one of the nine Muses, ruling over dance and the dramatic chorus. She lends her name to the word "terpsichorean" which means "of or relating to dance". She is usually depicted sitting down, holding a lyre, accompanying the dancers' choirs...
(muse of dancing), Erato
Erato
In Greek mythology, Erato is one of the Greek Muses. The name would mean "desired" or "lovely", if derived from the same root as Eros, as Apollonius of Rhodes playfully suggested in the invocation to Erato that begins Book III of his Argonautica....
(muse of erotic poetry), Thalia (muse of comedy), Polyhymnia
Polyhymnia
Polyhymnia , was in Greek mythology the Muse of sacred poetry, sacred hymn and eloquence as well as agriculture and pantomime. She is depicted as very serious, pensive and meditative, and often holding a finger to her mouth, dressed in a long cloak and veil and resting her elbow on a pillar...
(muse of hymns), and Urania
Urania
Urania was, in Greek mythology, the muse of astronomy. Some accounts list her as the mother of the musician Linus. She is usually depicted with a globe in her left hand. She is able to foretell the future by the arrangement of the stars...
(muse of astronomy).

In Roman and Greek poetry, it was traditional to invoke the goddess Melpomene so that one might create beautiful lyrical phrases (see Horace's Odes).