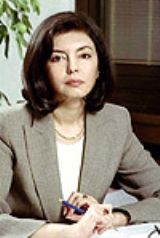 Encyclopedia
Meglena Shtilianova Kuneva (born 22 June 1957) is a Bulgarian
Bulgarians
The Bulgarians are a South Slavic nation and ethnic group native to Bulgaria and neighbouring regions. Emigration has resulted in immigrant communities in a number of other countries.-History and ethnogenesis:...
and EU politician.

In June 2001 she was elected a deputy (Member of Bulgarian Parliament) as a founding member of the Liberal
Liberalism
Liberalism is the belief in the importance of liberty and equal rights. Liberals espouse a wide array of views depending on their understanding of these principles, but generally, liberals support ideas such as constitutionalism, liberal democracy, free and fair elections, human rights,...
Simeon II National Movement (NDSV) party. In August 2001 Kuneva left her position in the Bulgarian parliament because she was appointed Deputy Minister of Foreign Affairs and Chief Negotiator of the Republic of Bulgaria with the European Union. She represented the Bulgarian Government in the Convention on the Future of Europe (the European Convention
European Convention
The Convention on the Future of Europe , was a body established by the European Council in December 2001 as a result of the Laeken Declaration...
), which designed the EU Constitutional Treaty (the European Constitution).

Meglena Kuneva is married to financier Andrey Pramov, a son of the secretary of the Central Committee of the Bulgarian Communist Party (1962–1978), and has one son – Aleksandar. She is fluent in English, French and Russian in addition to her native Bulgarian
Bulgarian language
Bulgarian is an Indo-European language, a member of the Slavic linguistic group.Bulgarian, along with the closely related Macedonian language, demonstrates several linguistic characteristics that set it apart from all other Slavic languages such as the elimination of case declension, the...
. An avid reader and supporter of literature, she has been chosen to be a member of the jury for the Vick Foundation
Vick Foundation
The Vick Foundation was established by Edward Vick in February 2004 to award an annual prize for best Bulgarian novel. Vick's initiative was acclaimed by those who saw in the prize a new opportunity for the Bulgarian literature after almost 15 years of standstill...
for the selection of the 2008 Bulgarian Novel of the Year. This Foundation ended its activities in February 2010.


Focus of her actions

Meglena Kuneva is interested in online data collection (of personal data), profiling
Profiling
Profiling, the extrapolation of information about something, based on known qualities, may refer specifically to:* Profiling practices * Forensic profiling, used in several types of forensic sciences* Offender profiling...
and behavioral targeting
Behavioral targeting
Behavioral targeting is a technique used by online publishers and advertisers to increase the effectiveness of their campaigns.Behavioral targeting uses information collected on an individual's web-browsing behavior, such as the pages they have visited or the searches they have made, to select...
, and in particular is looking for "enforcing existing regulation on the Internet and to regulate where adequate response to consumer concerns on the issue of data collection".
More specifically Meglena Kuneva proposes three particular strands of actions that must be addressed: privacy
Privacy
Privacy is the ability of an individual or group to seclude themselves or information about themselves and thereby reveal themselves selectively...
policies, commercial communications and commercial discrimination
Discrimination
Discrimination is the prejudicial treatment of an individual based on their membership in a certain group or category. It involves the actual behaviors towards groups such as excluding or restricting members of one group from opportunities that are available to another group. The term began to be...
.