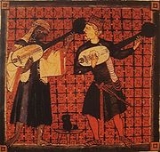 Overview
Medieval music is Western music
Classical music
Classical music is the art music produced in, or rooted in, the traditions of Western liturgical and secular music, encompassing a broad period from roughly the 11th century to present times...
written during the Middle Ages
Middle Ages
The Middle Ages is a periodization of European history from the 5th century to the 15th century. The Middle Ages follows the fall of the Western Roman Empire in 476 and precedes the Early Modern Era. It is the middle period of a three-period division of Western history: Classic, Medieval and Modern...
. This era begins with the fall of the Roman Empire and ends sometime in the early fifteenth century. Establishing the end of the medieval era
Dates of classical music eras
Music historians divide the European classical music repertory into various eras based on what style was most popular as taste changed. These eras and styles include Medieval, Renaissance, Baroque, Classical, Romantic, and 20th century. Some of the terms, such as "Renaissance" and "Baroque",...
and the beginning of the Renaissance
Renaissance
The Renaissance was a cultural movement that spanned roughly the 14th to the 17th century, beginning in Italy in the Late Middle Ages and later spreading to the rest of Europe. The term is also used more loosely to refer to the historical era, but since the changes of the Renaissance were not...
is difficult; the usage in this article is the one usually adopted by musicologists.
Instruments used to perform medieval music still exist, but in different forms. The flute
Flute
The flute is a musical instrument of the woodwind family. Unlike woodwind instruments with reeds, a flute is an aerophone or reedless wind instrument that produces its sound from the flow of air across an opening...
was once made of wood
Wood
Wood is a hard, fibrous tissue found in many trees. It has been used for hundreds of thousands of years for both fuel and as a construction material. It is an organic material, a natural composite of cellulose fibers embedded in a matrix of lignin which resists compression...
rather than silver
Silver
Silver is a metallic chemical element with the chemical symbol Ag and atomic number 47. A soft, white, lustrous transition metal, it has the highest electrical conductivity of any element and the highest thermal conductivity of any metal...
or other metal, and could be made as a side-blown or end-blown instrument.

What is Plainchant of plainsong?
More

Anyone know this medieval song? This is an unusual one :)
More
x