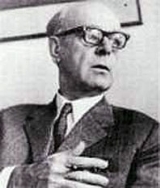 Encyclopedia
Mehmed "Meša" Selimović (Cyrillic: Мехмед Селимовић Меша; 26 April 1910 - 11 July 1982) was a Yugoslav
Yugoslavia
Yugoslavia refers to three political entities that existed successively on the western part of the Balkans during most of the 20th century....
writer. His novel Death and the Dervish is one of the most important literary works in post-war Yugoslavia. Some of the main themes in his works are relations between individual and authority, life and death, and other existential problems. His ethnicity and nationality
Nationality
Nationality is membership of a nation or sovereign state, usually determined by their citizenship, but sometimes by ethnicity or place of residence, or based on their sense of national identity....
as well as how he considered himself in these terms is a matter of some dispute.

Selimović was born on April 26, 1910 in Tuzla
Tuzla
Tuzla is a city and municipality in Bosnia and Herzegovina. At the time of the 1991 census, it had 83,770 inhabitants, while the municipality 131,318. Taking the influx of refugees into account, the city is currently estimated to have 174,558 inhabitants...
, Bosnia and Herzegovina, where he graduated from elementary school and high school. In 1930, he enrolled to study the Serbo-Croatian language
Serbo-Croatian language
Serbo-Croatian or Serbo-Croat, less commonly Bosnian/Croatian/Serbian , is a South Slavic language with multiple standards and the primary language of Serbia, Croatia, Bosnia and Herzegovina, and Montenegro...
and literature at the University of Belgrade
University of Belgrade
The University of Belgrade is the oldest and largest university of Serbia.Founded in 1808 as the Belgrade Higher School in revolutionary Serbia, by 1838 it merged with the Kragujevac-based departments into a single university...
Faculty of Philology
University of Belgrade Faculty of Philology
The Faculty of Philology is one of the constituent schools of the University of Belgrade. The school's purpose is to train and educate its students in the academic study or practice in linguistics and philology.-History:...
and has graduated in 1934. In 1936, he returned to Tuzla to teach in the gymnasium
Gymnasium (school)
A gymnasium is a type of school providing secondary education in some parts of Europe, comparable to English grammar schools or sixth form colleges and U.S. college preparatory high schools. The word γυμνάσιον was used in Ancient Greece, meaning a locality for both physical and intellectual...
that today bears his name. He spent the first two years of World War II in the hometown Tuzla, where he was arrested for participation in the Partisan
Partisans (Yugoslavia)
The Yugoslav Partisans, or simply the Partisans were a Communist-led World War II anti-fascist resistance movement in Yugoslavia...
anti-fascist resistance movement in 1943. After the release, he moved to the liberated territory, became a member of Communist Party of Yugoslavia and the political commissar of Tuzla Detachment of the Partisans
Partisans (Yugoslavia)
The Yugoslav Partisans, or simply the Partisans were a Communist-led World War II anti-fascist resistance movement in Yugoslavia...
. During the war, Selimović's brother, also a communist, was executed by partisans' firing squad for alleged theft, without trial; Selimović's letter in defense of the brother was to no avail. That episode apparently affected Meša's later contemplative introduction to Death and the Dervish, where the main protagonist Ahmed Nurudin fails to rescue his imprisoned brother.

Selimović began writing fairly late in his life. His first book, a collection of short stories Prva četa (The First Company) was published in 1950 when he was forty. His subsequent work, Tišine (Silences) was published eleven years later in 1961. The following books Tuđa zemlja (Foreign land, 1962) and Magla i mjesečina (Mist and Moonlight, 1965) did not receive widespread international recognition either.

However, his novel Death and the Dervish (Derviš i smrt, 1966) was widely received as a masterpiece in the West. The plot of the novel took place in 18th-century Sarajevo under Ottoman
Ottoman Empire
The Ottoman EmpireIt was usually referred to as the "Ottoman Empire", the "Turkish Empire", the "Ottoman Caliphate" or more commonly "Turkey" by its contemporaries...
rule, and reflected Selimović's own torment of the execution of his brother; the story speaks of the futility of one man's resistance against a repressive system, and the change that takes place within that man after he becomes a part of that very system. Some critics have likened this novel to Kafka's The Trial
The Trial
The Trial is a novel by Franz Kafka, first published in 1925. One of Kafka's best-known works, it tells the story of a man arrested and prosecuted by a remote, inaccessible authority, with the nature of his crime revealed neither to him nor the reader.Like Kafka's other novels, The Trial was never...
. It has been translated into numerous languages. Each chapter of the novel opens with a Qur'an
Qur'an
The Quran , also transliterated Qur'an, Koran, Alcoran, Qur’ān, Coran, Kuran, and al-Qur’ān, is the central religious text of Islam, which Muslims consider the verbatim word of God . It is regarded widely as the finest piece of literature in the Arabic language...
citation, the first being: "In the name of God, the most compassionate, the most merciful."

The next novel, Tvrđava (The Fortress, 1970), placed still further in the past, is slightly more optimistic, and fulfilled with faith in love, unlike the lonely contemplations and fear in Death and the Dervish. The Fortress and Death and the Dervish are the only novels of Selimović that have thus far been translated into English. Subsequent novels Ostrvo (The Island, 1974) and posthumously published Krug (The Circle, 1983), have not been translated into English.

He also wrote a book about Vuk Karadžić
Vuk Stefanovic Karadžic
Vuk Stefanović Karadžić was a Serbian philolog and linguist, the major reformer of the Serbian language, and deserves, perhaps, for his collections of songs, fairy tales, and riddles to be called the father of the study of Serbian folklore. He was the author of the first Serbian dictionary...
's orthographic
Orthography
The orthography of a language specifies a standardized way of using a specific writing system to write the language. Where more than one writing system is used for a language, for example Kurdish, Uyghur, Serbian or Inuktitut, there can be more than one orthography...
reforms, an elderly couple facing the aging and eventual death on a Dalmatian island, as well as his autobiography, Sjećanja (Сјећања).