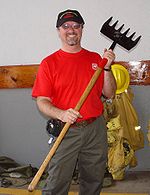 The McLeod is a wildland firefighting tool with a large hoe-like blade on one side and tined blade on the other. It is commonly used in the mountains of the American west. This tool is called a "Rake Hoe" in Australia and a "Streif" in the American southwest.

It was originally intended for raking fire lines with the teeth and for cutting branches and sod with the sharpened hoe edge. The McLeod is useful for removing slough and berm from a trail and tamping or compacting tread. It can also be used to shape a trail's backslope.

Because of its shape, the McLeod is an awkward tool to transport and store. Ideally it is carried with the tines pointing toward the ground for safety, with a sheath over the cutting edge. However, the mass distribution makes it difficult to carry in this orientation consistently.