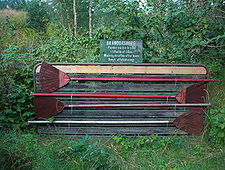 A flapper is a wildland firefighting tool also called a swatter or a beater. It is designed for extinguishing minor fire
Fire
Fire is the rapid oxidation of a material in the chemical process of combustion, releasing heat, light, and various reaction products. Slower oxidative processes like rusting or digestion are not included by this definition....
s in rural areas such as heaths
Heath (habitat)
A heath or heathland is a dwarf-shrub habitat found on mainly low quality acidic soils, characterised by open, low growing woody vegetation, often dominated by plants of the Ericaceae. There are some clear differences between heath and moorland...
. A flapper is built with a long handle and a series of lamellas which allows firefighter
Firefighter
Firefighters are rescuers extensively trained primarily to put out hazardous fires that threaten civilian populations and property, to rescue people from car incidents, collapsed and burning buildings and other such situations...
s to stand well back from the fire. The lamellas are constructed in either rubber
Rubber
Natural rubber, also called India rubber or caoutchouc, is an elastomer that was originally derived from latex, a milky colloid produced by some plants. The plants would be ‘tapped’, that is, an incision made into the bark of the tree and the sticky, milk colored latex sap collected and refined...
or steel
Steel
Steel is an alloy that consists mostly of iron and has a carbon content between 0.2% and 2.1% by weight, depending on the grade. Carbon is the most common alloying material for iron, but various other alloying elements are used, such as manganese, chromium, vanadium, and tungsten...
, though practically any other fireproof material could be used.

The fire is attacked from the wind-side by lightly swatting out the flame
Flame
A flame is the visible , gaseous part of a fire. It is caused by a highly exothermic reaction taking place in a thin zone...
s or glows with the thick flap. When the flapper hits the ground oxygen
Oxygen
Oxygen is the element with atomic number 8 and represented by the symbol O. Its name derives from the Greek roots ὀξύς and -γενής , because at the time of naming, it was mistakenly thought that all acids required oxygen in their composition...
supply to the fire is stopped and the fire will be extinguished. Where ground cover is short, the flapper can be dragged along the fire edge to smother the fire. If used too hard it can add more oxygen to the fire. It is often recommended to either hose water on the area or keep it under observation, as there will always be a risk of it flaring up later.

Due to a flapper's small size it is unfit for use against a blazing forest fire or large burning fields. The tool's design makes it only suitable for minor flames or glows within a limited area. For fire fighting in larger areas it is much more convenient to take out hoses from a fire engine and spray selected areas. Alternatively a water cannon
Water cannon
A water cannon is a device that shoots a high-pressure stream of water. Typically, a water cannon can deliver a large volume of water, often over dozens of metres / hundreds of feet. They are used in firefighting and riot control. Most water cannon fall under the category of a fire...
from a water tender
Water tender
A water tender, also known as a tanker in some regions, is a specialized firefighting apparatus designed for transporting water from a water source to a fire scene...
can be used.

A flapper is often part of the standard equipment on a fire engine and may also be set up inside and around forests and at heaths in order to take immediate action if a fire is seen.

The flapper's technique has been developed from using a wet green pine bough to swat the fire known as "wet sacking" a fire.