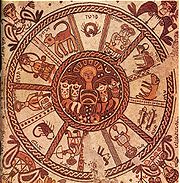 Mazzaroth is a hapax legomenon
Hapax legomenon
A hapax legomenon is a word which occurs only once within a context, either in the written record of an entire language, in the works of an author, or just in a single text. The term is sometimes used incorrectly to describe a word that occurs in just one of an author's works, even though it...
of the Hebrew Bible
Hebrew Bible
The Hebrew Bible is a term used by biblical scholars outside of Judaism to refer to the Tanakh , a canonical collection of Jewish texts, and the common textual antecedent of the several canonical editions of the Christian Old Testament...
, found in .
The similar word mazalot (מַּזָּלֹות) in may be related.

The word's precise meaning is uncertain but its context is that of astronomical constellations
Constellations
Constellations: An International Journal of Critical and Democratic Theory is a quarterly peer-reviewed academic journal of critical and democratic theory and successor of Praxis International. It is edited by Andrew Arato, Amy Allen, and Andreas Kalyvas...
, and it is often interpreted as a term for the zodiac
Zodiac
In astronomy, the zodiac is a circle of twelve 30° divisions of celestial longitude which are centred upon the ecliptic: the apparent path of the Sun across the celestial sphere over the course of the year...
, or the zodiacal constellations as a group.

In Yiddish, the term mazalot came to be used in the sense of "astrology" in general, surviving in the expression "mazel tov," meaning "good luck."

The appearance of the word in the Book of Job
Book of Job
The Book of Job , commonly referred to simply as Job, is one of the books of the Hebrew Bible. It relates the story of Job, his trials at the hands of Satan, his discussions with friends on the origins and nature of his suffering, his challenge to God, and finally a response from God. The book is a...
appears in the context of various astronomical phenomena:

The related word mazalot (מַּזָּלֹות) in 2 Kings
Books of Kings
The Book of Kings presents a narrative history of ancient Israel and Judah from the death of David to the release of his successor Jehoiachin from imprisonment in Babylon, a period of some 400 years...
may have a different meaning, and is often translated differently, with the linkage of this word to the planet
Planet
A planet is a celestial body orbiting a star or stellar remnant that is massive enough to be rounded by its own gravity, is not massive enough to cause thermonuclear fusion, and has cleared its neighbouring region of planetesimals.The term planet is ancient, with ties to history, science,...
s or the zodiac
Zodiac
In astronomy, the zodiac is a circle of twelve 30° divisions of celestial longitude which are centred upon the ecliptic: the apparent path of the Sun across the celestial sphere over the course of the year...
being more widely held (in Kabbalistic
Kabbalah
Kabbalah/Kabala is a discipline and school of thought concerned with the esoteric aspect of Rabbinic Judaism. It was systematized in 11th-13th century Hachmei Provence and Spain, and again after the Expulsion from Spain, in 16th century Ottoman Palestine...
astrology
Kabbalistic astrology
Kabbalistic astrology Kabbalistic astrology Kabbalistic astrology (called Mazal or Mazalot ["zodiac," "destiny"] is a system of astrology based upon the Hebrew Kabbalah. It is used to interpret and delineate a person's birth chart, seeking to understand it through a Kabbalistic lens...
, mazalot was also used for astrology in general, and the word may be related to the Assyrian manzaltu, "station"):

And the king stood on the platform, and made a covenant before the LORD, to walk after the LORD, and to keep His commandments, and His testimonies, and His statutes, with all his heart, and all his soul, to confirm the words of this covenant that were written in this book; and all the people stood to the covenant. And the king commanded Hilkiah the high priest, and the priests of the second order, and the keepers of the door, to bring forth out of the temple of the LORD all the vessels that were made for Baal, and for the Asherah, and for all the host of heaven; and he burned them without Jerusalem in the fields of Kidron, and carried the ashes of them unto Beth-el. And he put down the idolatrous priests, whom the kings of Judah had ordained to offer in the high places in the cities of Judah, and in the places round about Jerusalem; them also that offered unto Baal, to the sun, and to the moon, and to the constellations, and to all the host of heaven.

The Septuagint, however, uses the transliteration mazzaroth (μαζουρωθ) again at this point.

That star signs are taken credit for by the God of the bible is acknowledged in the beginning. Genesis 1:14, And God said, "Let there be lights in the expanse of the heavens to separate the day from the night. And let them be for signs and for seasons, (or appointed times) and for days and years (ESV)