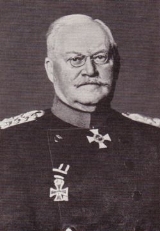 Encyclopedia
Maximillion Von Prittwitz (November 27, 1848 – March 29, 1917) was a German
Germany
Germany , officially the Federal Republic of Germany , is a federal parliamentary republic in Europe. The country consists of 16 states while the capital and largest city is Berlin. Germany covers an area of 357,021 km2 and has a largely temperate seasonal climate...
General.

Prittwitz came from an extremely old aristocratic Silesian
Province of Silesia
The Province of Silesia was a province of the Kingdom of Prussia from 1815 to 1919.-Geography:The territory comprised the bulk of the former Bohemian crown land of Silesia and the County of Kladsko, which King Frederick the Great had conquered from the Austrian Habsburg Monarchy in the 18th...
family in Bernstadt
Bierutów
Bierutów is a town in Oleśnica County, Lower Silesian Voivodeship, in south-western Poland. It is the seat of the administrative district called Gmina Bierutów. Prior to 1945 it was in Germany...
. His father was Gustav von Prittwitz, a Prussian
Kingdom of Prussia
The Kingdom of Prussia was a German kingdom from 1701 to 1918. Until the defeat of Germany in World War I, it comprised almost two-thirds of the area of the German Empire...
general, and his mother was Elizabeth von Klass.

At the outbreak of World War I
World War I
World War I , which was predominantly called the World War or the Great War from its occurrence until 1939, and the First World War or World War I thereafter, was a major war centred in Europe that began on 28 July 1914 and lasted until 11 November 1918...
, he was made commander of the German Eighth Army
German Eighth Army
The 8th Army was a World War I and World War II field army.-World War I:At the outbreak of World War I, the 8. Armee was stationed in East Prussia to defend against the expected Russian attack, Plan XIX. After the scrappy Battle of Gumbinnen, 8. Armee commander Generaloberst Maximilian von...
, and was tasked with defending East Prussia
East Prussia
East Prussia is the main part of the region of Prussia along the southeastern Baltic Coast from the 13th century to the end of World War II in May 1945. From 1772–1829 and 1878–1945, the Province of East Prussia was part of the German state of Prussia. The capital city was Königsberg.East Prussia...
from an expected Russian attack.

When the Russian advance threatened his rear, Prittwitz suggested a retreat to the west of the Vistula River. This meant the abandonment of East Prussia, which the German General Staff
German General Staff
The German General Staff was an institution whose rise and development gave the German armed forces a decided advantage over its adversaries. The Staff amounted to its best "weapon" for nearly a century and a half....
found unacceptable. Prittwitz was promptly replaced as Eighth Army commander by Paul von Hindenburg
Paul von Hindenburg
Paul Ludwig Hans Anton von Beneckendorff und von Hindenburg , known universally as Paul von Hindenburg was a Prussian-German field marshal, statesman, and politician, and served as the second President of Germany from 1925 to 1934....
in late August 1914. Hindenburg, and his aide-de-camp, Erich Ludendorff
Erich Ludendorff
Erich Friedrich Wilhelm Ludendorff was a German general, victor of Liège and of the Battle of Tannenberg...
, then destroyed the two invading Russian armies at the Battle of Tannenberg
Battle of Tannenberg (1914)
The Battle of Tannenberg was an engagement between the Russian Empire and the German Empire in the first days of World War I. It was fought by the Russian First and Second Armies against the German Eighth Army between 23 August and 30 August 1914. The battle resulted in the almost complete...
and the Battle of the Masurian Lakes
Battle of the Masurian Lakes
During World War I, there was:* First Battle of the Masurian Lakes, September 1914* Second Battle of the Masurian Lakes, February 1915...
.

Prittwitz retired to Berlin
Berlin
Berlin is the capital city of Germany and is one of the 16 states of Germany. With a population of 3.45 million people, Berlin is Germany's largest city. It is the second most populous city proper and the seventh most populous urban area in the European Union...
, where he lived for three years before dying of a heart attack
Myocardial infarction
Myocardial infarction or acute myocardial infarction , commonly known as a heart attack, results from the interruption of blood supply to a part of the heart, causing heart cells to die...
. He was buried in the Invalidenfriedhof in Berlin.
The source of this article is wikipedia, the free encyclopedia.  The text of this article is licensed under the GFDL.