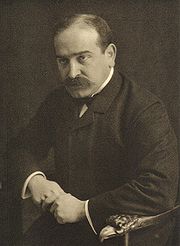 Max M. Warburg
Warburg family
The Warburg family is a financial dynasty of German Jewish origin, noted for their accomplishments in physics, classical music, art history, pharmacology, physiology, finance, private equity and philanthropy. They are believed to be descended from the Venetian Jewish del Banco family, in the early...
(5 June 1867 – 26 December 1946) was a German-born Jewish banker and from 1910 until 1938, director of M.M.Warburg & CO in Hamburg
Hamburg
-History:The first historic name for the city was, according to Claudius Ptolemy's reports, Treva.But the city takes its modern name, Hamburg, from the first permanent building on the site, a castle whose construction was ordered by the Emperor Charlemagne in AD 808...
, Germany. Prior to his directing of the Warburg banking company, he developed apprenticeships in Frankfurt
Frankfurt
Frankfurt am Main , commonly known simply as Frankfurt, is the largest city in the German state of Hesse and the fifth-largest city in Germany, with a 2010 population of 688,249. The urban area had an estimated population of 2,300,000 in 2010...
, Amsterdam
Amsterdam
Amsterdam is the largest city and the capital of the Netherlands. The current position of Amsterdam as capital city of the Kingdom of the Netherlands is governed by the constitution of August 24, 1815 and its successors. Amsterdam has a population of 783,364 within city limits, an urban population...
, Paris
Paris
Paris is the capital and largest city in France, situated on the river Seine, in northern France, at the heart of the Île-de-France region...
, and London
London
London is the capital city of :England and the :United Kingdom, the largest metropolitan area in the United Kingdom, and the largest urban zone in the European Union by most measures. Located on the River Thames, London has been a major settlement for two millennia, its history going back to its...
. As head of that firm, he advised Kaiser Wilhelm II prior to World War I
World War I
World War I , which was predominantly called the World War or the Great War from its occurrence until 1939, and the First World War or World War I thereafter, was a major war centred in Europe that began on 28 July 1914 and lasted until 11 November 1918...
.

In the 1930s, despite the rise of the Nazi Party, Warburg felt there was hope for the future in Germany and tried to wait out the Nazi crisis. Beginning in 1933 he served on the board of the German Reichsbank
Reichsbank
The Reichsbank was the central bank of Germany from 1876 until 1945. It was founded on 1 January 1876 . The Reichsbank was a privately owned central bank of Prussia, under close control by the Reich government. Its first president was Hermann von Dechend...
under governor Hjalmar Schacht
Hjalmar Schacht
Dr. Hjalmar Horace Greeley Schacht was a German economist, banker, liberal politician, and co-founder of the German Democratic Party. He served as the Currency Commissioner and President of the Reichsbank under the Weimar Republic...
. He sold the bank because the 1935 Nuremberg laws
Nuremberg Laws
The Nuremberg Laws of 1935 were antisemitic laws in Nazi Germany introduced at the annual Nuremberg Rally of the Nazi Party. After the takeover of power in 1933 by Hitler, Nazism became an official ideology incorporating scientific racism and antisemitism...
set the framework and campaign of “Aryanization”. He then emigrated to the United States
United States
The United States of America is a federal constitutional republic comprising fifty states and a federal district...
in 1938.

Max Warburg married Alice Magnus in 1899, and together they had four daughters and a son, Eric Warburg (1900—1990), founder of E.M. Warburg & Co, later known as Warburg Pincus
Warburg Pincus
Warburg Pincus, LLC is an American private equity firm with offices in the United States, Europe, Brazil and Asia. It has been a private equity investor since 1966...
.
The source of this article is wikipedia, the free encyclopedia.  The text of this article is licensed under the GFDL.