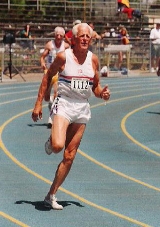 Overview
Masters athletics is a class of the sport of athletics for veteran athletes in the events of track and field
Track and field
Track and field is a sport comprising various competitive athletic contests based around the activities of running, jumping and throwing. The name of the sport derives from the venue for the competitions: a stadium which features an oval running track surrounding a grassy area...
, road running
Road running
Road running is the sport of running on a measured course over an established road . These events would be classified as long distance according to athletics terminology, with distances typically ranging from 5 kilometers to 42.2 kilometers in the marathon. They may involve large numbers of runners...
and cross country running
Cross country running
Cross country running is a sport in which people run a race on open-air courses over natural terrain. The course, typically long, may include surfaces of grass and earth, pass through woodlands and open country, and include hills, flat ground and sometimes gravel road...
. The competitions feature five-year age groups beginning at age 35. Men as old as 104
John Whittemore
John Whittemore of Montecito, California, has been credited as being the "world's oldest athlete". A long time Masters Track athlete, his last competition was on October 5, 2004, just six weeks before his 105th birthday. He threw the javelin and discus on that occasion...
and women in their 100s have competed in running, jumping and throwing events. Masters are sometimes known as veterans.
Since at least the early 1930s, middle-aged athletes in Europe, Australia and New Zealand have competed with younger athletes, especially in cross country and road races.

When and where are the next track and field events?
More