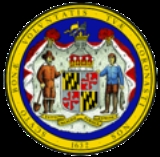 Encyclopedia
The Court of Appeals of Maryland is the supreme court
State supreme court
In the United States, the state supreme court is the highest state court in the state court system ....
of the U.S. state
U.S. state
A U.S. state is any one of the 50 federated states of the United States of America that share sovereignty with the federal government. Because of this shared sovereignty, an American is a citizen both of the federal entity and of his or her state of domicile. Four states use the official title of...
of Maryland
Maryland
Maryland is a U.S. state located in the Mid Atlantic region of the United States, bordering Virginia, West Virginia, and the District of Columbia to its south and west; Pennsylvania to its north; and Delaware to its east...
. The court, which is composed of one chief judge and six associate judges, meets in the Robert C. Murphy
Robert C. Murphy
Robert C. Murphy was a lawyer and jurist from Baltimore County, Maryland. He served as Chief Judge of the Maryland Court of Appeals, the state's highest court, from 1972 to October 1996...
Courts of Appeal Building in the state capital, Annapolis
Annapolis, Maryland
Annapolis is the capital of the U.S. state of Maryland, as well as the county seat of Anne Arundel County. It had a population of 38,394 at the 2010 census and is situated on the Chesapeake Bay at the mouth of the Severn River, south of Baltimore and about east of Washington, D.C. Annapolis is...
. The term of the Court begins the second Monday of September.

As Maryland's highest court, the Court of Appeals reviews cases of both major and minor importance. Throughout the year, the Court of Appeals holds hearings on the adoption or amendment of rules of practice and procedure. It also supervises the Attorney Grievance Commission and State Board of Law Examiners in attorney disciplinary and admission matters. The Chief Judge of the Court of Appeals, designated by the Governor, is the constitutional administrative head of the Maryland judicial system.

The court does not sit in panels; all seven judges sit on each case unless there is a disqualification, in which event a judge from another court, or a retired appellate judge, may be specially assigned to sit in the place of the disqualified judge. In practice, almost all cases are heard by seven judges, though a quorum
Quorum
A quorum is the minimum number of members of a deliberative assembly necessary to conduct the business of that group...
for the court is five judges.

The Judges of the court are required to be citizens of and qualified voters in Maryland. Prior to their appointment, they must have resided in Maryland for at least five years, and for at least six months in the appellate judicial circuit from which they are appointed. They must be at least thirty years of age at the time of appointment, and must have been admitted to practice law in Maryland. Appointees should be "most distinguished for integrity, wisdom and sound legal knowledge."

After initial appointment by the Governor and confirmation by the Senate, members of the court, at the first general election occurring at least one year after their appointment, run for continuance in office on their records without opposition. If the voters reject the retention in office of a judge, or the vote is tied, the office becomes vacant. Otherwise, the incumbent judge is retained in office for a ten-year term. This requirement of voter approval is similar to provisions in the Missouri Plan
Missouri Plan
The Missouri Plan is a method for the selection of judges. It originated in Missouri in 1940, and has been adopted by several states of the United States...
, a non-partisan method for selecting judges which is used by 11 states. Like all Maryland judges, members of the Court of Appeals must retire by their 70th birthday.

There is one judge from each of the state's seven Appellate Judicial Circuits and each judge is required to be a resident of his or her respective circuit. The circuits are currently as follows:

Unlike most other states, the jurists on the Maryland Court of Appeals are called judges, not justices. Also unlike most other American federal, state, and local courts, the judges on the Court of Appeals wear red robes and with white cross-collars, reminiscent of British court dress
Court dress
Court dress comprises the style of clothes prescribed for courts of law, and formerly for royal courts.- Where court dress is worn :Court dress is worn at hearings in open court in all Senior Courts of England and Wales and in county courts. However, court dress may be dispensed with at the option...
. Judges at all other levels of the Maryland judiciary wear the more customary black robes.

In order of decreasing seniority, the current judges on the court are:

As the highest tribunal in Maryland, the Court of Appeals was created by Article 56 of the Maryland Constitution of 1776
Maryland Constitution of 1776
The Maryland Constitution of 1778 was the first of four constitutions under which the U.S. state of Maryland has been governed. It was that state's basic law from its adoption in 1776 until the Maryland Constitution of 1851 took effect on July 4th of that year.-Background and drafting:The eighth...
. The Court was to be "composed of persons of integrity and sound judgment in the law, whose judgment shall be final and conclusive in all cases of appeal, from the general court, court of chancery, and court of admiralty . . ." With counsel, advice and consent, the Governor appointed all of the judges. Five judges were commissioned in 1778, but that number was reduced to three in 1801. The Court was restructured in 1806 by dividing the State into six judicial districts with a chief judge and two associate judges for each district appointed by the Governor and Council. Together, these six chief judges constituted the Court of Appeals which began to sit on the Eastern Shore
Delmarva Peninsula
The Delmarva Peninsula is a large peninsula on the East Coast of the United States, occupied by most of Delaware and portions of Maryland and Virginia...
at Easton
Easton, Maryland
Easton, founded 1710, is a town within the Easton District of Talbot County, Maryland, United States. The population was 11,708 at the 2000 census, and 14,677 according to current July 2008 census estimates. It is the county seat of Talbot County. The primary ZIP Code is 21601, and the...
as well as on the Western Shore at the State capital.

Judicial reorganization in 1943 provided for a five-member Court of Appeals elected for terms of fifteen years. The five judges included two from Baltimore City and one each from three appellate judicial circuits. In 1960, the number of judges was increased to the present-day seven. Until 1994, there was one from each of the first five Appellate Judicial Circuits and two from the Sixth Appellate Judicial Circuit (Baltimore City), but a Constitutional amendment realigned the circuits to create seven circuits with one judge from each. Since 1975, the Court of Appeals has heard cases almost exclusively by way of certiorari
Certiorari
Certiorari is a type of writ seeking judicial review, recognized in U.S., Roman, English, Philippine, and other law. Certiorari is the present passive infinitive of the Latin certiorare...
. As a result, the Court's formerly excessive workload has been reduced to a more manageable level, thus allowing the Court to devote more time to the most important and far-reaching issues.