Encyclopedia
Mary Lee Fitzhugh Custis (April 22, 1788 – April 23, 1853) was an Episcopal lay leader in Alexandria County (now Arlington County, Virginia, USA). The daughter of William Fitzhugh
William Fitzhugh
William Fitzhugh was an American planter and statesman who served as a delegate to the Continental Congress for Virginia in 1779. -Life:...
(1741–1809) a member of the Continental Congress, and Ann Bolling Randolph Fitzhugh, Mary Lee was most likely born at Chatham
Chatham Manor
Chatham Manor is the Georgian-style home completed in 1771 by William Fitzhugh, after about 3 years of construction, on the Rappahannock River in Stafford County, Virginia, opposite Fredericksburg. It was for more than a century the center of a large, thriving plantation. Flanking the main house...
, in Stafford County
Stafford County, Virginia
Stafford County is a county located in the Commonwealth of Virginia, a U.S. state, and just across the Rappahannock River from the City of Fredericksburg. As of the 2000 census, the population was 92,446, increasing to 128,961 in 2010.. Its county seat is Stafford. In 2006, and again in 2009,...
, Virginia. 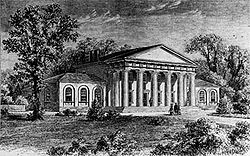 Custis was a member of a family network in northern Virginia that helped revive the state's Episcopal Church in the first part of the nineteenth century. She particularly influenced her cousin Bishop William Meade
William Meade
William Meade , was a United States Episcopal bishop.The son of Richard Kidder Meade , one of George Washington's aides during the War of Independence, he was born near Millwood, in what is now Clarke County, Virginia. He graduated as valedictorian in 1808 at the college of New Jersey ; studied...
. Custis promoted Sunday schools and supported the work of the American Colonization Society
American Colonization Society
The American Colonization Society , founded in 1816, was the primary vehicle to support the "return" of free African Americans to what was considered greater freedom in Africa. It helped to found the colony of Liberia in 1821–22 as a place for freedmen...
.

She died at Arlington on April 23, 1853, and was buried on the estate. Her husband survived her by four years, at which point Arlington House and the grounds were inherited by their daughter Mary Anna Randolph Custis
Mary Anna Custis Lee
Mary Anna Randolph Custis Lee was the wife of Confederate General Robert E. Lee.-Biography:Mary Anna Custis Lee was the only surviving child of George Washington Parke Custis, George Washington's step-grandson and adopted son and founder of Arlington House, and Mary Lee Fitzhugh Custis, daughter...
, Mrs. Robert E. Lee.