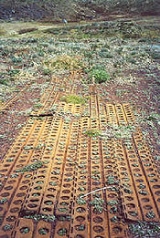 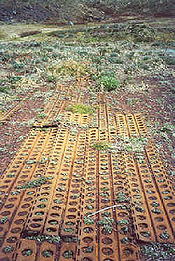 Marsden Matting is standardized, perforated steel mat
Mat
A mat is a generic term for a piece of fabric or flat material, generally placed on a floor or other flat surface, and serving a range of purposes including:* providing a regular or flat surface, such as a mousepad....
ting material originally developed by the United States
United States
The United States of America is a federal constitutional republic comprising fifty states and a federal district...
at the Waterways Experiment Station
Waterways Experiment Station
The Engineer Research and Development Center ' is a US Army Corps of Engineers laboratory organization whose mission is to "Provide science, technology, and expertise in engineering and environmental sciences in support of our Armed Forces and the Nation to make the world safer and better." The...
shortly before World War II
World War II
World War II, or the Second World War , was a global conflict lasting from 1939 to 1945, involving most of the world's nations—including all of the great powers—eventually forming two opposing military alliances: the Allies and the Axis...
, primarily for the rapid construction of temporary runways and landing strips. The material is also commonly known as Marston mats (or Marston Plate) for a town in North Carolina adjacent to Camp Mackall
Camp Mackall
Camp Mackall is an active U.S. Army training facility located in eastern Richmond County and northern Scotland County, North Carolina, south of the town of Southern Pines. The facility is in close proximity to and is a sub-installation of Fort Bragg Camp Mackall is an active U.S. Army training...
airfield where the material was first manufactured and used in November 1941. The material was also used in the Korean and Vietnam Wars where its common name, from its Nato Stock Number nomenclature
NATO Stock Number
A NATO Stock Number, or National Stock Number as it is known in the US, is a 13-digit numeric code, identifying all the 'standardized material items of supply' as they have been recognized by all NATO countries including United States Department of Defense...
, is pierced (or perforated) steel planking (PSP).

Marsden matting consisted of steel strips with holes punched through it in rows and a formation of U-shaped channels between the holes. Hooks were formed along one long edge and slots along the other long edge so that they could be connected to each other. The short edges were straight cut with no holes or hooks. To achieve lengthwise interlocking, the mats were laid in a staggered pattern.

The hooks were usually held in the slots by a steel clip that filled the part of the slot that is empty when the adjacent sheets are properly engaged together. The holes were bent up at their edges so that the beveled edge stiffened the area around the hole. In some mats a T-shaped stake could be driven, at intervals, through the holes to keep the assembly in place on the ground. Sometimes the sheets were welded together.

The typical Marsden matting was the M8 landing mat. A single piece weighed about 66 pounds and was 10 ft (3 m) long by 15 in (0.381 m) wide. The hole pattern for the sheet was three holes wide by 29 holes long resulting in 87 holes per mat.

A variation made from aluminum was produced to allow easier transportation by aircraft, since it weighed about 2/3 as much. It was referred to as PAP for perforated aluminum planking, but was not as common as aluminum was a controlled strategic material during WWII.

PSP was later, after the war, used by many early South Eastern U.S. racing teams as it was manufactured in the area, and used in many abandoned military airfields. It was also used during a similar period when NASCAR teams used car trailers.

Marsden Matting was extensively used during World War II
World War II
World War II, or the Second World War , was a global conflict lasting from 1939 to 1945, involving most of the world's nations—including all of the great powers—eventually forming two opposing military alliances: the Allies and the Axis...
by Seabee
Seabee
Seabees are members of the United States Navy construction battalions. The word Seabee is a proper noun that comes from the initials of Construction Battalion, of the United States Navy...
s (Construction Battalions) and other front line construction personnel to build runway
Runway
According to ICAO a runway is a "defined rectangular area on a land aerodrome prepared for the landing and take-off of aircraft." Runways may be a man-made surface or a natural surface .- Orientation and dimensions :Runways are named by a number between 01 and 36, which is generally one tenth...
s and other readily usable surfaces over all kinds of terrain in the Pacific Theater of Operations
Pacific Theater of Operations
The Pacific Theater of Operations was the World War II area of military activity in the Pacific Ocean and the countries bordering it, a geographic scope that reflected the operational and administrative command structures of the American forces during that period...
. A C-47 Skytrain
C-47 Skytrain
The Douglas C-47 Skytrain or Dakota is a military transport aircraft that was developed from the Douglas DC-3 airliner. It was used extensively by the Allies during World War II and remained in front line operations through the 1950s with a few remaining in operation to this day.-Design and...
supply aircraft was the first plane to land on the first steel-mat runway constructed in France after the Invasion of Normandy.

On Pacific islands the matting was typically covered with crushed and rolled coral
Coral
Corals are marine animals in class Anthozoa of phylum Cnidaria typically living in compact colonies of many identical individual "polyps". The group includes the important reef builders that inhabit tropical oceans and secrete calcium carbonate to form a hard skeleton.A coral "head" is a colony of...
or soil to form a level surface. The perforated and channeled design of the matting created strength and rigidity and facilitated drainage. A runway two hundred feet wide and 5000 feet (1500 m) long could be created within two days by a small team of engineers.

At the start of the Berlin Airlift the runways at Tempelhof Airport in the US Zone in Berlin were made of PSP. Designed to support fighters and smaller cargo aircraft, the Douglas C-54 Skymaster that formed the backbone of the U.S. effort was too heavy for the PSP. Berliners were hired to fix the runway between the three-minute arrivals, running onto the runways with bags of sand to dump onto the mats and soften the surface.

Large quantities of matting were produced; approximately 2 million tons costing more than US$200 million (in the 1940s). At the end of the war a large amount of the material remained as war surplus and was pressed into use in various civil engineering applications such as road and bridge construction. As they were made from steel with a high manganese
Manganese
Manganese is a chemical element, designated by the symbol Mn. It has the atomic number 25. It is found as a free element in nature , and in many minerals...
content, the matting was also highly resistant to corrosion. In various countries located in the Pacific Theatre, particularly Papua New Guinea, matting still remains in use as fencing or roadway barriers, in some cases stretching for miles.
The source of this article is wikipedia, the free encyclopedia.  The text of this article is licensed under the GFDL.