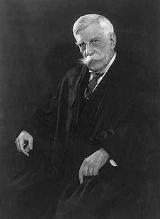 Encyclopedia
The "marketplace of ideas" is a rationale for freedom of expression based on an analogy
Analogy
Analogy is a cognitive process of transferring information or meaning from a particular subject to another particular subject , and a linguistic expression corresponding to such a process...
to the economic
Economics
Economics is the social science that analyzes the production, distribution, and consumption of goods and services. The term economics comes from the Ancient Greek from + , hence "rules of the house"...
concept of a free market
Free market
A free market is a competitive market where prices are determined by supply and demand. However, the term is also commonly used for markets in which economic intervention and regulation by the state is limited to tax collection, and enforcement of private ownership and contracts...
. The "marketplace of ideas" belief holds that the truth
Truth
Truth has a variety of meanings, such as the state of being in accord with fact or reality. It can also mean having fidelity to an original or to a standard or ideal. In a common usage, it also means constancy or sincerity in action or character...
or the best policy
Policy
A policy is typically described as a principle or rule to guide decisions and achieve rational outcome. The term is not normally used to denote what is actually done, this is normally referred to as either procedure or protocol...
arises out of the competition of widely various ideas in free, transparent public discourse, an important part of liberal democracy
Liberal democracy
Liberal democracy, also known as constitutional democracy, is a common form of representative democracy. According to the principles of liberal democracy, elections should be free and fair, and the political process should be competitive...
. This concept is often applied to discussions of patent law as well as freedom of the press
Freedom of the press
Freedom of the press or freedom of the media is the freedom of communication and expression through vehicles including various electronic media and published materials...
and the responsibilities of the media. More recently the term has come into use by educators in higher education who have linked the concept to academic freedom.

The concept also has roots in John Milton
John Milton
John Milton was an English poet, polemicist, a scholarly man of letters, and a civil servant for the Commonwealth of England under Oliver Cromwell...
's argument for freedom of expression. Milton argued that the individual is capable of using reason and distinguishing right from wrong, good from bad. But in order to be able to exercise this reason correctly, the individual must have unlimited access to the ideas of his fellow men in "a free and open encounter." In Milton's writings can be found the idea that when people argue against each other the better argument will prevail.

In the modern era, John Stuart Mill
John Stuart Mill
John Stuart Mill was a British philosopher, economist and civil servant. An influential contributor to social theory, political theory, and political economy, his conception of liberty justified the freedom of the individual in opposition to unlimited state control. He was a proponent of...
(On Liberty
On Liberty
On Liberty is a philosophical work by British philosopher John Stuart Mill. It was a radical work to the Victorian readers of the time because it supported individuals' moral and economic freedom from the state....
, 1859) and Thomas Jefferson
Thomas Jefferson
Thomas Jefferson was the principal author of the United States Declaration of Independence and the Statute of Virginia for Religious Freedom , the third President of the United States and founder of the University of Virginia...
, provided their own explications of the "marketplace of ideas," without using that phrase. Referring to the University of Virginia
University of Virginia
The University of Virginia is a public research university located in Charlottesville, Virginia, United States, founded by Thomas Jefferson...
, Jefferson said, "This institution will be based upon the illimitable freedom of the human mind. For here we are not afraid to follow truth wherever it may lead, nor to tolerate any error so long as reason is left free to combat it" (Letter, Jefferson to William Roscoe, 1820).

In 1813, as part of a correspondence with Isaac McPherson, Thomas Jefferson wrote on the issues confronting patent law: "That ideas should freely spread from one to another over the globe, for the moral and mutual instruction of man, and improvement of his condition, seems to have been peculiarly and benevolently designed by nature, when she made them, like fire, expansible over all space, without lessening their density at any point, and like the air in which we breathe, move, and have our physical being, incapable of confinement, or exclusive appropriation."

Jefferson, who was highly scrutinized by the press, also said: "The basis of our governments being the opinion of the people, the very first object should be to keep that right; and were it left to me to decide whether we should have a government without newspapers or newspapers without a government, I should not hesitate a moment to prefer the latter. But I should mean that every man should receive those papers and be capable of reading them." –Thomas Jefferson to Edward Carrington, 1787. ME 6:57. 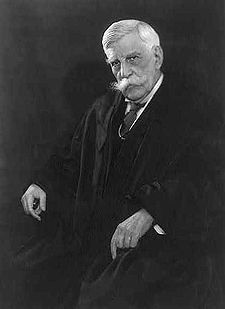 The concept of the "marketplace of ideas" is often attributed to Justice Oliver Wendell Holmes Jr.'s dissenting opinion in Abrams v. United States
Abrams v. United States
Abrams v. United States, 250 U.S. 616 , was a 7-2 decision of the United States Supreme Court involving the 1918 Amendment to the Espionage Act of 1917, which made it a criminal offense to urge curtailment of production of the materials necessary to the war against Germany with intent to hinder the...
, 250 U.S. 616 (1919). Interestingly, while Justice Holmes (1919) implied the idea in his dissenting opinion, he never used the term. Holmes (1919) stated:
After Justice Brennan coined the phrase "marketplace of ideas" in his concurrence to Lamont v. Postmaster General
Lamont v. Postmaster General
Lamont v. Postmaster General, 381 U.S. 301 , was a landmark First Amendment Supreme Court case, in which the ruling of the Supreme Court struck down § 305 of the Postal Service and Federal Employees Salary Act of 1962a federal statute requiring the Postmaster General to detain and deliver only upon...
in 1965, the term appeared again in the 1967 U.S. Supreme Court decision Keyishian v. Board of Regents, in which the Court stated: "The classroom is peculiarly the 'marketplace of ideas.'"

Fredrick Siebert glosses the notion of the marketplace of ideas in Four Theories of the Press: "Let all with something to say be free to express themselves. The true and sound will survive. The false and unsound will be vanquished. Government should keep out of the battle and not weigh the odds in favor of one side or the other."

The idea of a "marketplace of ideas" has also been applied to the study of scientific research as a social institution.

Makau Mutua argues in Facilitating Freedom of Religion or Belief, A Deskbook that the idea of the marketplace of ideas as applied to religion "incorrectly assumes a level playing field" among religions.
The source of this article is wikipedia, the free encyclopedia.  The text of this article is licensed under the GFDL.